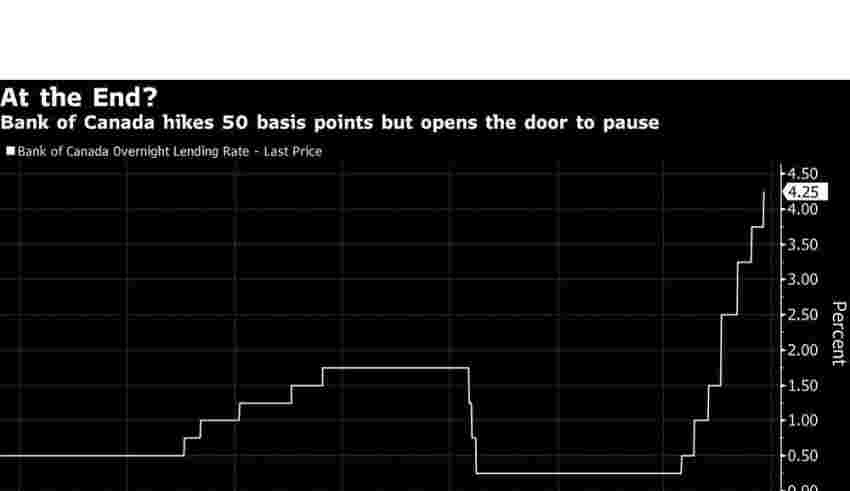 (Bloomberg) — The Bank of Japan in the coming week is widely expected to stick with the negative interest rates that set it apart from the world’s other major central banks.

At the decision due on Tuesday, Governor Haruhiko Kuroda will reiterate his out-of-sync stance that monetary stimulus must stay in place to secure lasting inflation.

That’s in contrast to the hawkish language on prices and interest rates that dominated the global central banking landscape over the past week, even as the Federal Reserve, the European Central Bank and the Bank of England opted for smaller hikes than before.

All 47 economists surveyed by Bloomberg forecast no change in the BOJ’s policy settings, including its 0.25% cap on 10-year bond yields.

After a decade of trying to generate inflation in an economy known for its entrenched price weakness, Kuroda is determined to keep stimulus on tap in the remaining months of his tenure.

Inflation in Japan is at a four-decade high, but more subdued than in the US and Europe. Figures due Friday are expected to show core inflation inching up toward 4%, but Kuroda is waiting for signs of wage growth to reinforce a price trend he says is still driven by higher commodity prices and a weak yen.

Speculation among investors and BOJ watchers is therefore focusing on the policy trajectory after Kuroda steps down in April.

BOJ officials see the possibility of a policy review in 2023 after examining wage growth momentum and the extent of a global slowdown, people familiar with the matter said earlier this month. Reviews in the past have resulted in adjustments, including the switch to yield curve control.

Until then, the world’s last anchor of low interest rates is set to remain in place.

“With a stand-pat decision on key levers, investors will watch for any indications from Kuroda on whether or when the BOJ will conduct a policy review.”

Elsewhere, the economic calendar is thinning out as the year winds down and the Christmas holidays loom.

Click here for what happened last week and below is our wrap of what’s coming up in the global economy.

In the US, fresh data on the Fed’s preferred inflation metric, consumer spending and incomes will be released on Friday.

The November personal consumption expenditures price index will be closely watched after a separate measure, the consumer price index, posted lower than expected results for two straight months to signal that the worst of inflation has likely passed.

Inflation-adjusted personal outlays will offer insight into consumer demand and spending patterns in November, with a breakdown of spending on goods and services. US incomes probably continued to rise amid a still-strong labor market.

The data come after the Fed on Wednesday raised its benchmark rate by 50 basis points, and officials signaled borrowing costs will head higher than investors expect in 2023 before the hiking cycle ends.

“We still have some ways to go,” Fed Chair Jerome Powell said at a press briefing. “I wouldn’t see us considering rate cuts until the committee is confident that inflation is moving down to 2% in a sustained way.”

Among other data is the Conference Board’s December gauge of consumer confidence, and reports on new and existing home sales in November.

In Canada, the inflation reading for November is likely to show slowing in the headline rate to the weakest in nine months. That may embolden policy makers to ease off tightening after a year of aggressive rate hikes.

Further out, few reports are due in the shortened final week of the year. Releases on US house prices and regional manufacturing activity will be published, along with weekly jobless claims on Dec. 29, the penultimate trading day of 2022.

The coming week will be quiet on the official data front in China. All eyes will be on high-frequency indicators as a surge in Covid infections and the abandonment of strict containment policies ripple through the economy.

South Korea’s early trade figures will give the latest snapshot of how the global economy is holding up.

Down Under, Reserve Bank of Australia minutes may shed more light on the rate-hike trajectory and whether the possibility of a pause to tightening has even been considered.

Indonesia has its last interest rate decision of the year on Thursday.

In the final week of the year, Japanese jobs, spending and industrial output numbers will give the latest pulse check on the world’s number three economy at the start of the week.

Meanwhile, South Korea reports output and inflation data in the latter part of an otherwise quiet period after a tumultuous year for Asia’s economies.

In the wake of the ECB’s rate increase, the euro region will turn quiet ahead of the holidays. A speech by Vice President Luis de Guindos on Monday will be a highlight, and colleagues from Estonia, Lithuania and Slovakia are also scheduled to speak.

Germany’s Ifo business confidence index on Monday may show mild improvement at a time when Europe’s biggest economy is forecast to suffer one of the region’s worst contractions.

Among other focus points will be consumer and manufacturing confidence in Italy on Friday, and fuller gross domestic product readings from around the euro zone.

Onto the last week of the year, and initial readings of Spanish and Portuguese inflation due on Dec. 30 will be highlights during an otherwise tranquil period.

The UK will also turn quiet after the fireworks of the latest Bank of England rate hike. Public-finance data on Wednesday, and a breakdown of third-quarter GDP on Thursday, are the main items on the calendar there. No BOE speeches are scheduled.

In Eastern Europe, Hungary’s central bank will set rates and release new forecasts on Tuesday amid a rift with the government over economic policy. The next day, its Czech counterpart is expected to keep borrowing costs unchanged for a fourth meeting.

In Africa, data from Ghana on Wednesday will likely show economic growth slowed to 4% in the third quarter, from 4.8%, due to surging inflation, rising rates and a slump in the cedi that have dented business confidence.

Meanwhile, Turkey’s central bank is expected to hold its benchmark rate at 9% on Thursday, having met President Recep Tayyip Erdogan’s target of single-digit rates by the end of the year.

But a surprise is always possible in Turkey, and economists are expected to hedge their estimates and look closely for forward guidance into 2023, an election year.

Colombia’s GDP-proxy results for October are expected to build on September’s strong 4.2% showing, driven in no small part by investment that’s back at pre-pandemic levels. The minutes of Banco de la República’s Dec. 16 meeting – where policy makers hiked to 12% — may offer additional signals regarding a possible terminal rate. Economists surveyed by the central bank see another half-point hike in January to 12.5%, with no easing before mid-year.

On Thursday, Chile’s central bank posts the minutes of its Dec. 6 meeting, at which policy makers kept the key rate at a record 11.25% and vowed to hold it there until they’re certain inflation is on its way toward target.

A jump in consumer prices in November likely pushed back the timeline on any easing as economists reckon inflation won’t get back to target before 2025.

Closing out the week, Brazilian mid-month consumer price data are expected to confirm that inflation is squarely below 6%, less than half April’s level but nearly twice the central bank’s target. All five of Latin America’s big inflation-targeting central banks will miss their targets for a second year in 2022.

As with the rest of the world, the final week of the year offers sparse pickings. Jobless numbers in Chile, Brazil and Mexico will be the main highlights, along with a measure of inflation in Brazil.