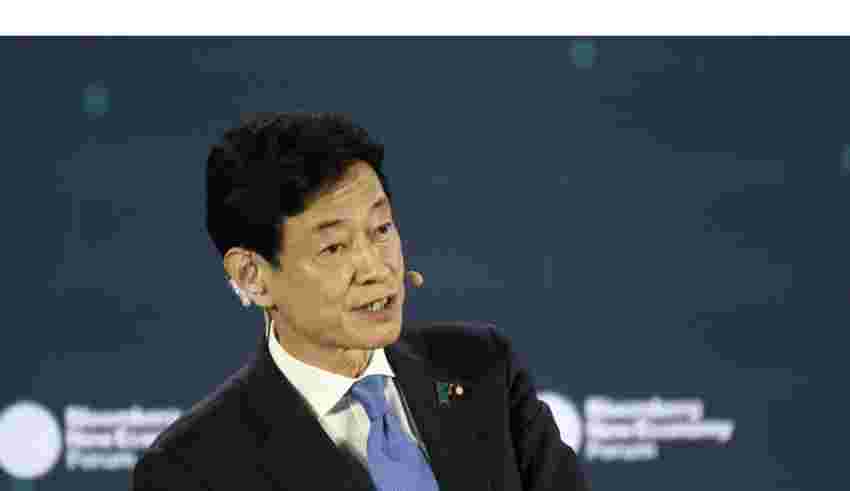 (Bloomberg) — Japan wants the Group of Seven advanced economies to take a coordinated approach this year aimed at preventing the “economic coercion” that China has applied to some of its trading partners.

Actions taken by China in recent years, such as suspending imports of Taiwanese pineapples and Australian wine, represent a “clear and present danger” for economies around the world, Yasutoshi Nishimura, Japan’s minister of economy and trade, said in Washington on Thursday. “We expect effective responses to economic coercion will be a major item at this year’s G-7 summit.”

Japan is the rotating head of the G-7 industrial democracies this year and will host the group’s summit. Nishimura said that “countermeasures” may be necessary to help countries and regions that are the target of mercantilist actions by authoritarian regimes. Identifying chokepoints that could be used by such regimes would also be helpful, he said.

China has repeatedly applied economic punishments toward trading partners amid diplomatic disputes. Japan itself saw its imports of rare earths from China — crucial to a number of manufacturing supply chains — affected in 2010 following a maritime incident in contested East China Sea waters.

Beijing, for its part, has blasted G-7 members for what it says are their own protectionist moves that are designed to prevent China’s economic rise. The Chinese Foreign Ministry has warned that export controls on semiconductors imposed by the Biden administration hurt the global economy and US businesses. Late last year, China also criticized the UK for abusing state power in overturning a chip-factory deal.

Nishimura, who also cited Russia’s moves to cut off European energy supplies in the wake of its invasion of Ukraine, was speaking at the Center for Strategic and International Studies think tank in Washington. That’s the venue where the late former Japanese Prime Minister Shinzo Abe famously declared that “Japan is back” on the world stage.

Nishimura said his nation embraces that same sentiment in leading the G-7 this year.

Living With Multiple Sclerosis Means Always Being My Own Advocate