Actor Johnny Depp is appealing the one count of defamation that Amber Heard was awarded during their recent trial.

Page Six reports, Depp filed the notice to appeal on Friday, a move that would nullify the $2 million the court awarded Amber.

The legal move comes one day after Amber filed her own appeal in the case, hoping to dodge the $10.35 million the jury awarded Johnny.

After she filed the appeal, Amber’s spokesperson told “Extra” in a statement, “We believe the court made errors that prevented a just and fair verdict consistent with the First Amendment. We are therefore appealing the verdict. While we realize today’s filing will ignite the Twitter bonfires, there are steps we need to take to ensure both fairness and justice.” 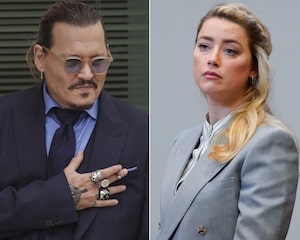 Depp’s spokesperson also told us on Thursday, “The jury listened to the extensive evidence presented during the six-week trial and came to a clear and unanimous verdict that the defendant herself defamed Mr. Depp in multiple instances. We remain confident in our case and that this verdict will stand.”

Depp was suing Heard for defamation and $50 million. She was countersuing him for $100 million.

In June, the jury found in favor of Depp, agreeing that it was defamation when Heard claimed she was a domestic abuse survivor in a 2018 op-ed. He was awarded $10 million in compensatory damages and $5 million in punitive damages. The judge immediately reduced the $5 million figure to $350,000, in line with a Virginia statutory cap.

Amber had partial win in her countersuit, as the jury awarded her $2 million in compensatory damages for a statement made by one of Depp’s lawyers.

Heard recently asked for a new trial, but was denied.

Charlson Bredehoft said, “Absolutely, and she has some excellent grounds for it.”

Savannah also asked if Heard is able to pay a $10.35M judgment, and Charlson Bredehoft replied, “Oh, no. Absolutely not.”

The attorney felt Amber lost because Depp’s legal team was able to “demonize” her client and suppress “an enormous amount of evidence” like medical records and text messages.

Guthrie pointed out that the jury didn’t believe Amber’s testimony, and Charlson Bredehoft replied, “That’s because she was demonized here. A number of things were allowed in this court that should not have been allowed, and it caused the jury to be confused.”

She added, “We weren’t allowed to tell them about the U.K. judgment.” Depp brought a libel lawsuit against The Sun U.K. in 2018 for labeling him a “wife beater,” but he lost the case in 2020.

Charlson Bredehoft explained, “And the court found there, and we weren’t allowed to tell the jury this, but the court found that Mr. Depp had committed at least 12 acts of domestic violence, including sexual violence against Amber. So what did Depp’s team learn from this? Demonize Amber, and suppress the evidence.”

The attorney went on, “We had an enormous amount of evidence that was suppressed in this case that was in the U.K. case. In the U.K. case, when it came in, Amber won, Mr. Depp lost.”

Depp has consistently denied ever abusing Heard, and released a statement after the verdict, saying, “From the very beginning, the goal of bringing this case was to reveal the truth, regardless of the outcome. Speaking the truth was something that I owed to my children and to all those who have remained steadfast in their support of me. I feel at peace knowing I have finally accomplished that.”

Guthrie brought up the vitriolic and lopsided social media against Amber, and the attorney said there was “no way” the jury “couldn’t have been influenced by it, and it was horrible.”

“It really, really was lopsided,” she said. “It’s like the Roman Colosseum how they viewed this whole case. I was against cameras in the courtroom, and I went on record with that and had argued against it because of the sensitive nature of this, but it made it a zoo.”

Depp’s lawyers Benjamin Chew and Camille Vasquez also spoke with Guthrie, and responded to talk of an appeal.

Chew explained, “We feel very confident that there are no errors that would justify any kind of successful appeal.”

Responding to Charlson Bredehoft’s comments about the U.K. trial, Vasquez said, “It was a different process, and also Mr. Depp and Ms. Heard in this case were the parties so they had different disclosure obligations… The overwhelming evidence that was presented in this case in Virginia far exceeded what was presented in the U.K. and we believe the jury got it right.”

Chew took on speculation that the jurors were influenced by social media, saying, “No, I don’t think there’s any reason to believe that the jurors violated their oath. And again, that suggestion was disappointing to hear.”

Vasquez added, “It is everywhere, but at the same time, they were admonished every single night. And they had a tremendous amount of respect for the court and the process, and they were doing the best that they could.”