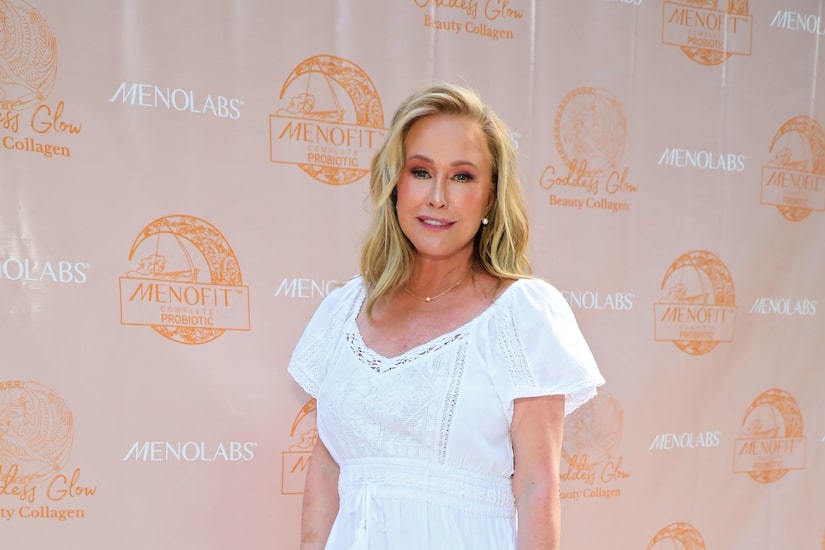 Kathy Hilton threw a lavish backyard viewing party for her grand return to Season 12 of “The Real Housewives of Beverly Hills” and she did it in conjunction with one of her new favorite brands!

“Extra’s” Terri Seymour spoke with Kathy about the drama on “The Real Housewives of Beverly Hills,” her famous daughters, and how she feels at her age.

Of her relationship with the ladies of “RHOBH,” Hilton dished, “Everything was fine up until the end of the season.”

When asked if she got picked on, Kathy commented, “Well, we’ll all judge that when you see it.”

There have been reports that Kathy is on bad terms with her sister Kyle Richards after they reportedly butted heads on a cast trip to Aspen.

Without spilling too much about the “family drama,” Kathy expressed some regret on how she handled things. She said, “I should have just kept it to myself…. I’m pretty even keeled… I flew in with no sleep to Aspen and you know, overtired…No excuse, but I mean I was overtired and high altitude, a glass of wine, and my feelings being maybe overly sensitive or whatever.”

Hilton joked that she might have forgotten to take her MenoLabs pill that night. She elaborated, “It was something off camera that I was sharing… It was kind of venting and I, you know, I’m sorry and I’m sorry for upsetting anyone.”

Kyle has since accepted Kathy’s apology. Kathy stressed, “I mean, we’re sisters… We’ve gone through things together and what can I say… I love her dearly.”

When asked if Lisa Rinna got involved in the drama, Kathy answered, “You know, the shame of the whole thing is I really enjoyed and had such a good time with everybody, so hopefully everything works out.”

Hilton noted that she try to “stay out” of the drama as much as she can.

Kathy also gave an update on daughter Nicky Hilton’s newborn baby. She gushed, “Oh my goodness, he’s adorable. My granddaughters are all obsessed.”

As for how Nicky is doing, Kathy shared, “She’s breastfeeding, so it’s just every second, ‘I can’t talk right now… he’s hungry.’”

Hilton also had her “fingers crossed” about her other daughter Paris Hilton, who has expressed a desire to have kids too! She pointed out, “I don’t ask, because you know those things can take a while.”

According to Kathy, Paris and her husband Carter Reum are “very, very happy” after marrying a few months ago.

Kathy, 63, also got candid about what she’s going through at her age. She admitted, “I find that going through the change—I like to call it the change of life. I lost my mother when I was 42 and mom started going through it when she was 38, so it’s not necessarily something that just older people go through, but all I remember her saying is I’m melting…

Kathy elaborated, “I have had not really so many hot flashes, but being warm, my temperature, if I don’t take my, you know, MenoLabs, I am boiling to the point where I have to get, like, a blow dryer and blow my hair. It gets soaking wet. I wake up, I have to change and put T-shirts on, and you know, I go through three or four and then there will be a month or three weeks where I won’t have any problem at all,”

As for how MenoLabs has helped her, Hilton explained, “I really felt like it was one pill that I could take and it really kind of helped everything.”