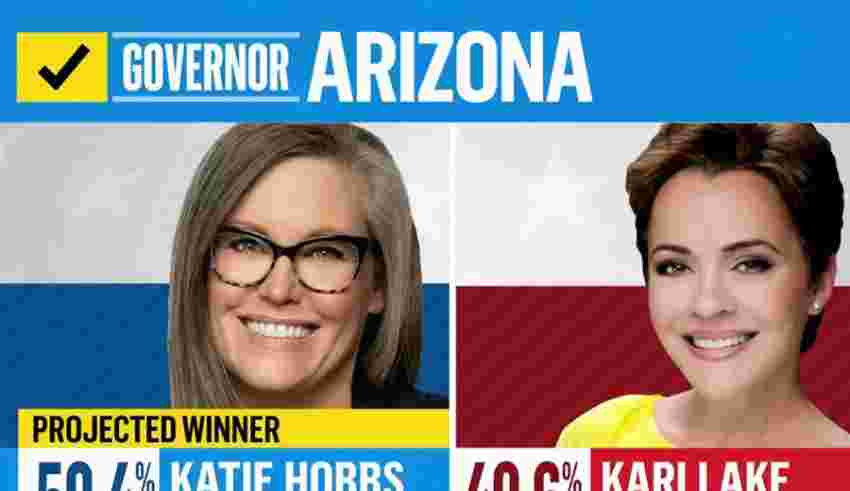 PHOENIX, AZ – Arizona Democratic Secretary of State Katie Hobbs is projected to win the state’s gubernatorial race against GOP rival Keri Lake, but the closeness of the results may mandate an automatic recount of the votes tallied as per state law.

Lake is a former television news journalist turned Republican politician previously worked at Phoenix television station KSAZ-TV for 22 years; she stepped down from her anchor role in March 2021 and announced her run for Governor, having never held public office before. Lake was endorsed by former President Donald Trump, and has repeatedly echoed his claims that the 2020 presidential election was “rigged” and “stolen.”

Hobbs, who has served as Secretary of State of Arizona since January 2019, and throughout her campaign she was criticized by Lake for steadfastly refusing to debate with her in a public forum, with Hobbs claiming that the MAGA Republican was only interested in spectacle and spreading conspiracy theories.

Hobbs’ campaign focused on defending the results of the 2020 election, protecting abortion rights, and plans to work with law enforcement to enhance border security, the one area where she shared common ground with her opponent.

While the race has been called for Hobbs, not all of the votes in the Arizona gubernatorial race have been tallied; with 98 percent of polling places reporting, Hobbs leads Lake 50.4 percent versus 49.6 percent, for a total of 19,382 votes as per the Associated Press.

Once the votes have been completely counted, if the difference between the two candidates hits half a percent – which would amount to between 12,000-13,000 votes – it would automatically trigger a recount by state law. Currently, Lake would need to make up several thousand votes to close that gap and force a recount.