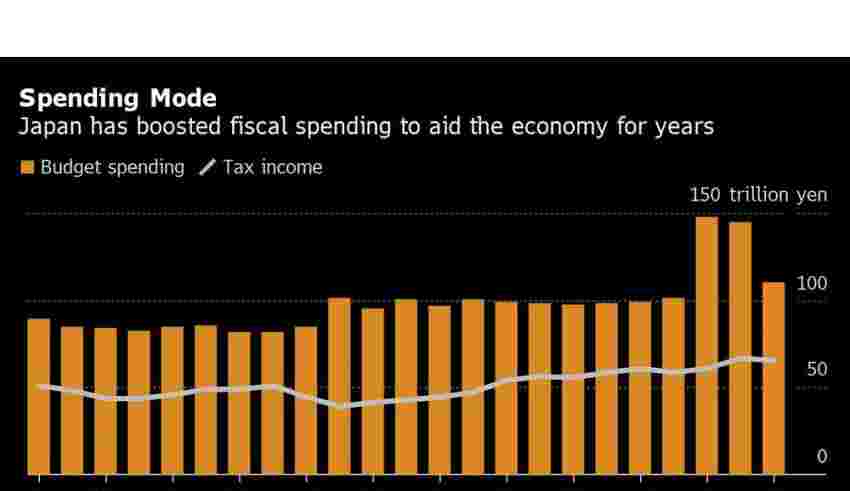 (Bloomberg) — Japan’s cabinet is set to approve a 29.1 trillion yen ($198 billion) extra budget to fund an economic stimulus package that aims to ease the impact of inflation on people and companies.

The second supplementary budget for the year ending in March will be partly funded by 22.9 trillion yen of government bond issuance according to documents obtained by Bloomberg. The latest plan adds to the nation’s already ballooning debt burden.

The measures are largely an effort by Prime Minister Fumio Kishida to stem the impact of rising prices on households and businesses exacerbated by the slide in the yen to three-decade lows. Public discontent over inflation has helped push down Kishida’s popularity to levels that have put past administrations in danger.

The accelerating price gains have started to spread beyond energy, suggesting the inflation will last longer than first expected, but growth in paychecks has failed to keep up, eating into households’ ability to spend.

By providing some relief against higher costs, the premier is hoping to boost his support while enabling the Bank of Japan to continue with rock-bottom interest rates for longer despite the impact of those policies on the currency.

The largest part of the extra spending, around a quarter of the budget, will be used to boost price-relief measures, including subsidies for electricity and gasoline, and measures to encourage companies to raise wages.

Around a fifth of the budget will provide funding for Kishida’s initiatives to spread wealth more widely. A further 7.5 trillion yen will fund measures to improve disaster resilience and cope with the changing national security environment.

The additional budget is expected to gain cabinet approval later Tuesday. It will then be submitted to parliament where it’s likely to pass given Kishida’s ruling coalition majority. Finance Minister Shunichi Suzuki has said he aims to secure its passage by the end of this year.

By issuing more debt to fund the package, the government extends a spending spree that’s accelerated during the pandemic.

Still, after a rejigging of issued bonds, including those for investment and loans, and a front-loading of other planned debt, the ministry has managed to limit the increase in the overall issuance of government bonds for this fiscal year to around 5 trillion yen, according to people familiar with the matter.

Efforts to keep additional issuance under a tight rein likely reflect the ministry’s concern to show the country’s rising debts are being kept under a certain degree of control.

Japan has the highest public debt load in the developed world and while it can largely rely on domestic takers for its debt issuance, including the central bank, policymakers are aware of the need to maintain market confidence in its fiscal discipline.

The recent collapse of Liz Truss’s premiership in the UK serves as a timely reminder of the perils of announcing massive spending plans without sufficiently thinking through all the funding requirements.

Still, one poll showed that more than half of Japanese want the BOJ’s ultra-easy monetary policy reviewed as the yen struggles to hold up against the dollar.

While the extra budget is set to fund measures to ease the impact of inflation, it also includes steps to try and make the best of the positive impacts from the weak yen, rather than trying to reverse the trend. Some 3.5 trillion yen of the budget is earmarked for strengthening regions’ ability to profit from the weaker currency and the potential for renewed inbound tourism.

—With assistance from Takashi Hirokawa.