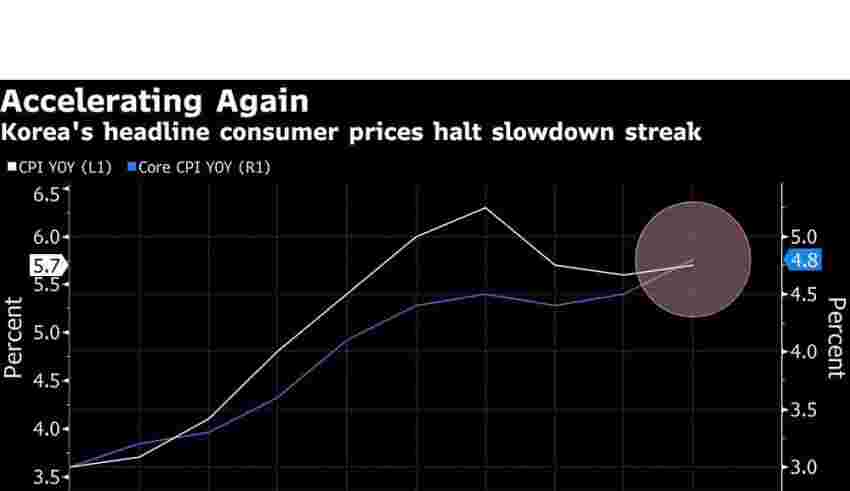 Consumer prices advanced 5.7% from a year earlier, quickening from 5.6% in September and matching economists’ estimates, the statistics office reported Wednesday. Core inflation accelerated to 4.8%, well above estimates of 4.5%.

The result reinforces the need for the Bank of Korea to keep tightening monetary policy. The central bank meets in three weeks’ time and will decide whether to deliver another half-percentage-point hike or revert to a more gradual pace of 25 basis points.

The BOK has raised its benchmark by a half-point at two of its past three meetings, seeking to narrow its rate gap with the Federal Reserve and stem the won’s depreciation.

The Korean currency is hovering around its lowest level in 13 years, boosting the cost of imports and offsetting the benefits of weakening price growth in food and energy. Escalating inflation also risks a price-wage spiral that the BOK sees as one of the biggest threats to the economy.

The central bank is tightening even as falling exports and deteriorating consumer confidence threaten economic growth. A crowd crush in Seoul that killed more than 150 people during the weekend may also weigh on consumption.

The BOK meets Nov. 24, when it plans to update its projections for inflation and growth. Its key rate currently stands at 3%.

(Updates with breakdown and chart.)