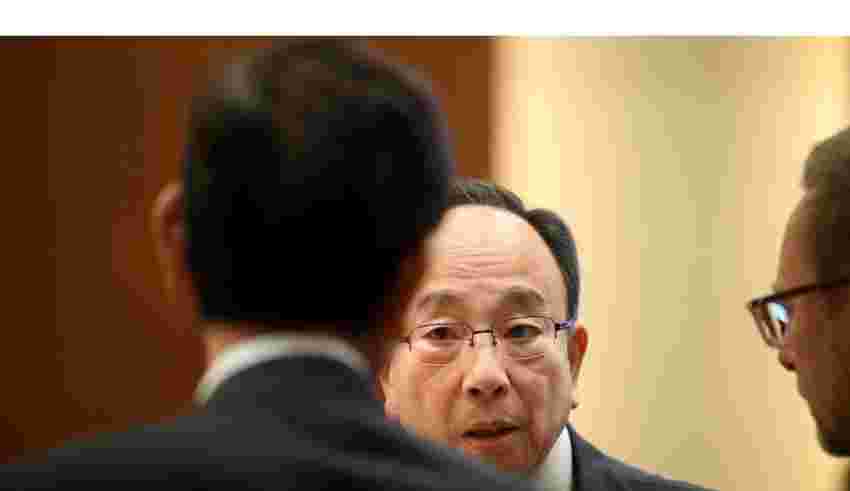 (Bloomberg) — Bank of Japan Governor Haruhiko Kuroda just gave investors a glimpse of what to expect when the world’s boldest experiment with ultra-loose monetary policy comes to an end.

In the face of sustained market pressure, Kuroda shocked markets Tuesday by saying he’ll now allow Japan’s 10-year bond yields to rise to around 0.5%, double the previous upper limit of 0.25%.

Whether this is a strategic tweak to buy time for his yield-curve control settings until his decade-long term ends in April or the start of the end for his unprecedented monetary easing remains to be seen.

But one thing is clear: a crack has opened that markets around the world will keep prising in the weeks and months ahead.

“This is a step toward an exit, whatever the BOJ calls it,” said Masamichi Adachi, chief Japan economist at UBS Securities and a former BOJ official. “This opens the door to a chance of a rate hike in 2023 under a new governorship.”

The yen strengthened sharply against the dollar after the decision and continued gains, briefly touching 132.00 from 137.16 immediately before the decision. The yield on 10-year Japanese government debt jumped to 0.46% from the previously capped level of 0.25% following the BOJ’s move.

The ripple effects also spread far outside Japan, with the fallout touching everything from US stock-index futures to the Australian dollar and gold.

The market moves suggested investors interpreted the move as a tightening measure.

But another way to view the latest surprise from the 78-year-old governor is as a step to make the yield curve control program more, not less, sustainable.

“This confirms our view that the BOJ is determined to stick to the YCC policy even after a change in leadership in April next year,” said Shigeto Nagai, a former BOJ official and head of Japan research at Oxford Economics. “It appears that the BOJ decided to accept the effective tightening as a cost to make YCC policy more sustainable.”

That was the message peddled by Kuroda in his post-decision press conference, where he said the tweak is designed to boost the effectiveness of his signature program. Kuroda has two more policy meetings to oversee before his term is up, meaning it will fall on his successor to complete the path toward policy normalization.

And Tuesday’s market gyrations highlight just how tricky it will be to reverse policy given the combination of unorthodox moves supporting the BOJ’s stimulus: keeping negative short-term interest rates, pinning 10-year yields near zero, making massive asset purchases and government interventions in currency markets to counter the yen’s fall.

Any misstep by the new governor could trigger market turmoil on a global scale.

“The BOJ has created so much tension in markets this year with its policy stance — the spring has been so tightly wound — the impact could be massive when they finally decide to let it go,” Vishnu Varathan, head of economics and strategy at Mizuho Bank in Singapore, said ahead of Tuesday’s meeting. “It will rip through every aspect of markets.”

Higher bond yields would mean unrealized losses on Japanese government bond holdings, including those held by the BOJ. A sustained policy change could also hammer Japanese equities, including shares in Uniqlo-operator Fast Retailing Co. and communications giant SoftBank Group, which number among the many that benefited from the central bank’s asset-buying spree.

The bigger concern for the rest of the world is that it could cut loose the last remaining tether on global bond yields and trigger a sell-off in dollar assets in favor of the yen. Tuesday’s tweak capped a year where virtually every major central bank has tightened, with China being the notable exception.

If a sustained tightening sees Japanese investors such as banks and pension funds dispose of overseas investments including global equities, that could even fuel contagion across assets including those in emerging markets.

Japanese investors have more than $3 trillion invested in overseas stocks and bonds, with over half of that stashed in the US. Other countries such as the Netherlands, Australia and France are also vulnerable to possible Japanese fund repatriation, according to Bloomberg data.

“Allowing rates to rise could see a tsunami of offshore Japan money flooding back home,” Amir Anvarzadeh, strategist at Asymmetric Advisors Pte, who has tracked Japanese markets closely for three decades, said before Tuesday’s meeting. “That is the big ‘reset’ move.”

To handle the delicate task, Prime Minister Fumio Kishida is expected to appoint someone who already has the trust of financial markets. Most economists surveyed by Bloomberg News see BOJ veterans as the best choices for the position, with current Deputy Governor Masayoshi Amamiya and former Deputy Governor Hiroshi Nakaso leading the list.

Both were named as candidates by Kishida’s right-hand man, Seiji Kihara, in a recent interview with Bloomberg.

Amamiya is widely considered the frontrunner, and a choice that would signal Kishida’s desire for continuity.

A fan of classical music, in particular the recordings of conductor Herbert von Karajan, he is known for orchestrating Kuroda’s early “shock and awe” campaign of massive bond purchases as well as the BOJ’s more recent yield curve control policy. His nickname in financial markets, “Mr. BOJ,” indicates how essential he’s been to the bank’s battle against deflation.

Nakaso, currently the chair of private think-tank Daiwa Institute of Research, is another favorite. Like Amamiya, he joined the BOJ straight out of university and eventually served as Kuroda’s deputy. He was involved in winding down the BOJ’s previous quantitative easing program in 2006, and is also known for leading the central bank’s fight against a home-grown banking crisis in the late 1990s.

One key difference with the dovish Amamiya is that Nakaso has spoken of the limits of prolonging the BOJ’s ultra-loose policy. In a book published earlier this year, he described what an exit could look like, saying it might be similar to the Fed’s moves and involve an intermediate step of buying bonds to cover those that mature until it can start withdrawing liquidity.

By choosing Nakaso, then, Kishida would signal a shift away from so-called Abenomics, the expansionist policies launched by the late Prime Minister Shinzo Abe who tapped Kuroda for the job back in 2013.

Not everyone believes it’s a two-horse race, though.

“I still think it’s not a done deal that Amamiya or Nakaso will take the helm,” said Hiromichi Shirakawa, chief Japan economist at Credit Suisse Group AG. “Both were heavily involved with Kuroda’s easing, so it’s a bit strange for them to be the one tasked with reflecting on Kuroda’s BOJ and then moving on.”

The prime minister typically announces the government’s pick for central bank chief in February, based on a shortlist put together by advisers. The candidate is then expected to be questioned in parliament before lawmakers vote on the appointment around March. Parliamentary approval is expected to be easy, given the ruling coalition’s majorities in both houses of parliament.

While the end of the Kuroda era could give Kishida a chance to break away from the legacy of Abenomics, it also puts greater pressure on him to wean the government off its heavy borrowing habit. Japan’s public debt load has ballooned to more than 260% of gross domestic product.

A low-interest comfort zone has allowed the government to fund seemingly endless stimulus efforts, including a recent package aimed at offsetting the impact of soaring energy prices — one of the few areas of the economy experiencing rapid inflation.

After two extra budgets this year, the government is now struggling to find a consistent source to pay for an additional 43 trillion yen ($325 billion) of security spending. The suspicion is that much of it will come from a familiar source: the bond market.

And Japan’s banks, which have often complained about the prolongation of ultra-low rates at the expense of their profit margins, aren’t sure they’re ready for a policy switch either. While they want higher rates, they’re also seriously concerned about market disruptions and potential losses on their Japanese government bond holdings in an abrupt policy shift, said two senior executives at Japan’s biggest banks who asked not to be identified as they aren’t allowed to speak publicly.

Kuroda has been grappling with market tests to the sustainability of his yield curve control settings for months now. In June, the yield curve cap came under the fiercest attacks since it was launched, after aggressive tightening by overseas central banks and the yen’s plunge to a multi-decade low prompted speculation of policy change.

The BOJ scooped up record amounts of debt in its daily fixed-rate buying operations to bat away the speculation. That triggered deterioration in an already distorted bond market as the central bank sucked away liquidity and effectively wiped out trading for days.

The yen was another casualty, weakening beyond 150 against the dollar in October as the yield gap with the US widened, forcing Japan to prop up the yen.

Kuroda has now acted to stem some of those pressures. Question is, will that move alleviate or exacerbate market bets against his policy framework?