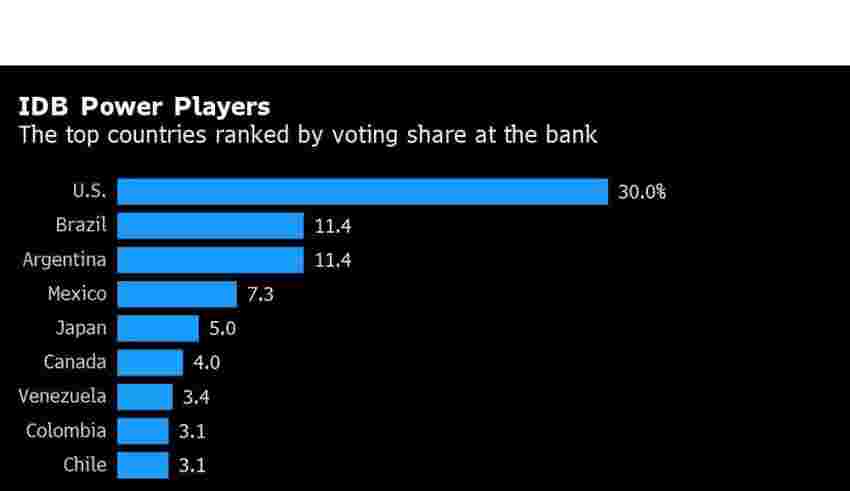 (Bloomberg) — Governments from Latin America and the Caribbean chose Brazil’s Ilan Goldfajn to become the next chief of the Inter-American Development Bank, a key financial institution for the region and one of its most coveted jobs.

Goldfajn, the current Western Hemisphere director of the International Monetary Fund, was elected during a meeting Sunday of finance ministers and other officials of member nations, with most participating virtually from capitals across the Americas, according to people familiar with the proceedings, who asked not to be identified because it hasn’t yet been announced publicly.

The election came after Argentina withdrew its own candidate to back Goldfajn, according to the people. An Argentine official said that the nation’s government worked out an agreement to have Argentines in several high-ranking positions at the bank, including one of its vice presidents, and negotiated with the US, Canada, Brazil and Argentina to give Goldfajn the majority.

The winner needed a majority of the voting shares of the IDB, as the Washington-based lender is known, and backing from more than half of a group of 28 nations that includes the bank’s regional borrowers plus the US and Canada.

The support of the Biden administration was pivotal, with the US controlling 30% of the bank’s voting share, almost triple the amount of second-place Brazil and Argentina. The five candidates interviewed for the job with representatives of the IDB’s member governments, giving presentations and answering questions, one week ago.

The IDB is a key lender in the region for countries that borrowed more than $23 billion last year. The election came after a turbulent era for the bank, with nations in September removing President Mauricio Claver-Carine after a probe found that he probably broke ethics rules in a romantic relationship with a top aide.