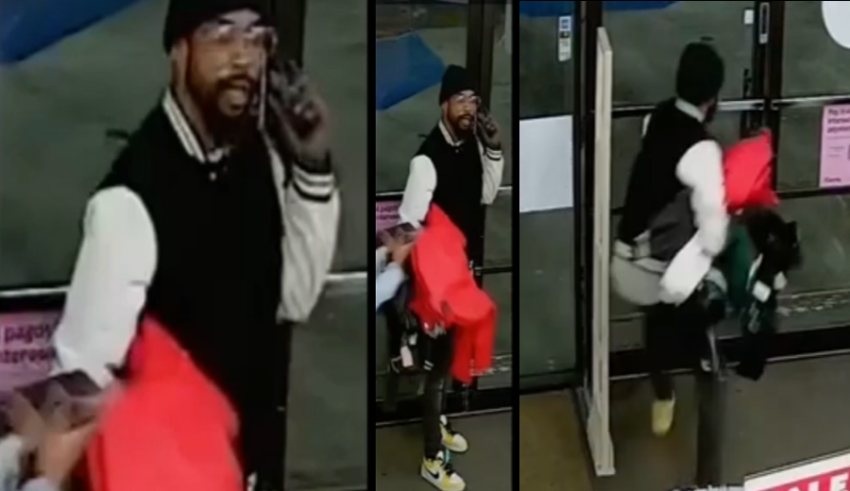 LAUDERDALE LAKES, FL – A shoplifter with his arms full of clothing loses his cool and kicks a door when he realizes he is locked inside a Lauderdale Lakes store. Now, Broward Sheriff’s Office robbery detectives released video of the strong-arm robbery in the hopes of identifying this impatient thief.

According to authorities, at approximately 8:15 p.m., on Wednesday, December 7, a man wearing a black and white jacket, black pants, black hat and glasses entered the Rainbow clothing store located at 3021 North State Road 7 in Lauderdale Lakes. He browsed through the store for about thirty minutes until he abruptly attempted to leave the business with his hands full of the colorful merchandise. Unbeknownst to him, the store was minutes from closing and the door was locked.

Once the thief attempted to open the door, it would not budge. He became enraged and yelled for the stunned employees to open the door. He dropped the clothing that was in his hands and forcefully kicked the door. As one of the employees was about to unlock the door so the thief could leave, he realized he could unlock the bolt himself. Before he left though, he pushed one of the employees to the ground, then picked up the clothing and fled in a red truck that was waiting outside. Detectives say he got away with nearly $200 in merchandise.

Anyone with information on this incident or who can identify the thief, is asked to contact BSO Det. Armando Enrique at 954-321-4233 or submit a tip through the SaferWatch App. If you wish to remain anonymous, please contact Broward Crime Stoppers at 954-493-TIPS (8477), online at browardcrimestoppers.org, or dial **TIPS (8477) from any cellphone in the United States.