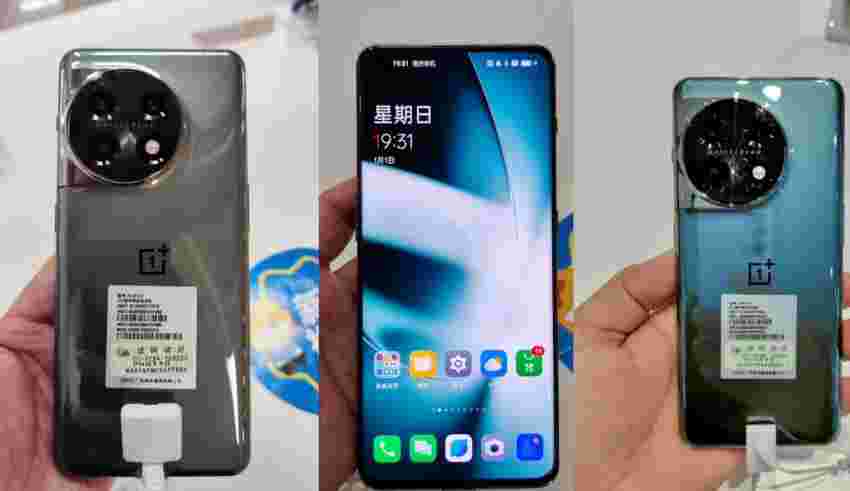 With the OnePlus 11 scheduled to make its first appearance in China tomorrow, January 4th, in-store images of the flagship have already surfaced on Chinese social media platform Weibo.

As expected, the images reveal that the OnePlus 11 sports a hole-punch selfie camera positioned on the display’s top left with thin bezels and curved edges. On the rear, the flagship’s camera module is circular, and fuses with the edge of the device almost seamlessly.

Interestingly, the rear has a glossy look to it, in contrast to its predecessors OnePlus 10 Pro and OnePlus 10T, both of which featured a textured glass back. The top of the device has two holes, one for the phone’s microphone, and the other is likely a speaker. On the bottom, the phone features a SIM card slot, another microphone, a speaker grille, and a USB-C charging port.

Further, while the flagship’s leaked specs have already made the rounds, here’s a recap. From what we know so far, the OnePlus 11 will feature a 6.7-inch 2K AMOLED display with a 120Hz refresh rate and runs on Qualcomm’s new Snapdragon 8 Gen 2 chip. The device is reported to weigh 205g and will come in either 12GB or 16GB RAM configurations with either 256GB or 512GB of UFS 4.0 storage. The OnePlus 11 will also sport a 5,000mAh battery and support 100W fast charging.

On the rear, the OnePlus 11 will sport a primary 50-megapixel Sony IMX890 sensor, a 48-megapixel ultrawide camera and a 32-megapixel telephoto shooter with 2x optical zoom. On the front will be a 16-megapixel selfie camera, and the device will IP54 certification, a downgrade from the OnePlus 10 Pro’s IP68 water and dust resistance.

The device will release worldwide on February 7th.

Check out the in-store images of the OnePlus 11 below: