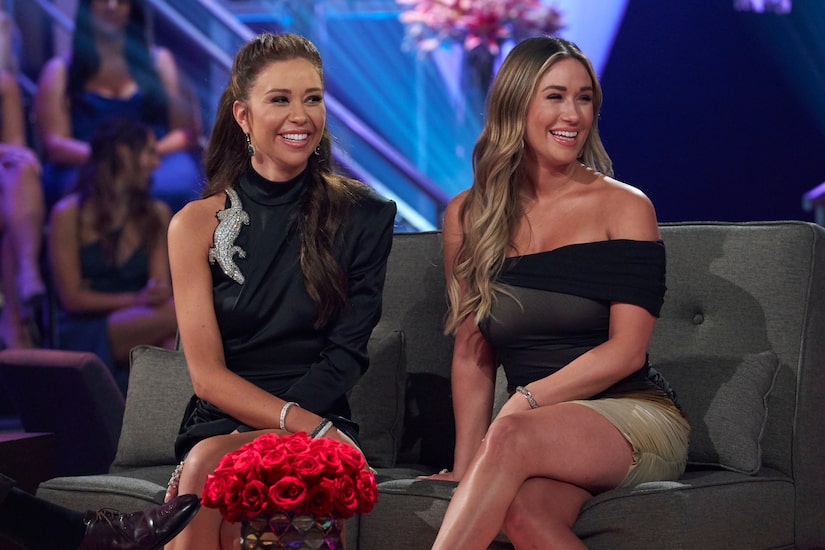 On Monday, “The Bachelorette” stars Rachel Recchia and Gabby Windey reunited with many of the guys from this season of the ABC hit.

The first guy to sit in the hot seat with host Jesse Palmer was Logan, who was called out by the other guys for deciding to explore his relationship with Gabby over Rachel.

Logan insisted that it was “unintentional” when he left Rachel to pursue Gabby. He told Jesse that he doesn’t regret pursuing Gabby, but that he would change how he handled the tough situation.

During the episode, Nate also sat down with Jesse to discuss his breakup with Gabby.

Holding back his emotions, he said, “There are no hard feelings between us.”

Nate also addressed his controversial past after being accused of infidelity prior to his time on “The Bachelorette” and keeping his daughter a secret from past relationships.

Nate admitted that he went through a “traumatizing” divorce, so he put up walls to protect his daughter.

He apologized for not being “communicative,” insisting that he is a changed man.

While some question his feelings for Gabby, Nate also insisted that his emotions for her were “real.”

Nate also opened up about being a father to his daughter, who he calls his “heart.”

Rachel apologized to Jordan for following her heart and not pursuing their relationship.

When Jacob spoke to Gabby, he acknowledged his past mistakes, adding, “I’m truly and deeply sorry.”

During the season, Jacob raised eyebrows when he told Gabby, “If you were the only person here, I don’t think I would have the heart to continue. At the end of the day, we’re trying to find someone to spend the rest of our lives with. Obviously, you’re smoking, though.”

As for Logan’s decision to pursue Gabby, Rachel admitted that she was “hurt” when he did that, but she understood.

After the episode, “Extra’s” Katie Krause spoke with Logan, who opened up about his regrets about how things played out.

Logan also teased his “wild” time on “Bachelor in Paradise,” revealing that he found a connection. Watch!

During the episode, Rachel also revealed that it felt “good” to see Nate again.

Nate also thanked Gabby for giving him the chance to explore their relationship.

James Clarke aka Meatball also reenacted the famous scene where he poured tomato sauce over himself. He even tackled guest Billy Eichner to the floor. Billy was there to promote his new movie “Bros.”

Rachel and Gabby expressed that they had no regrets with how the season went down.

Jesse predicts that the audience will be “shocked” by the “twists and turns” of what’s to come.

“The Men Tell All” ended with a sneak peek of the “craziest ending ever.”