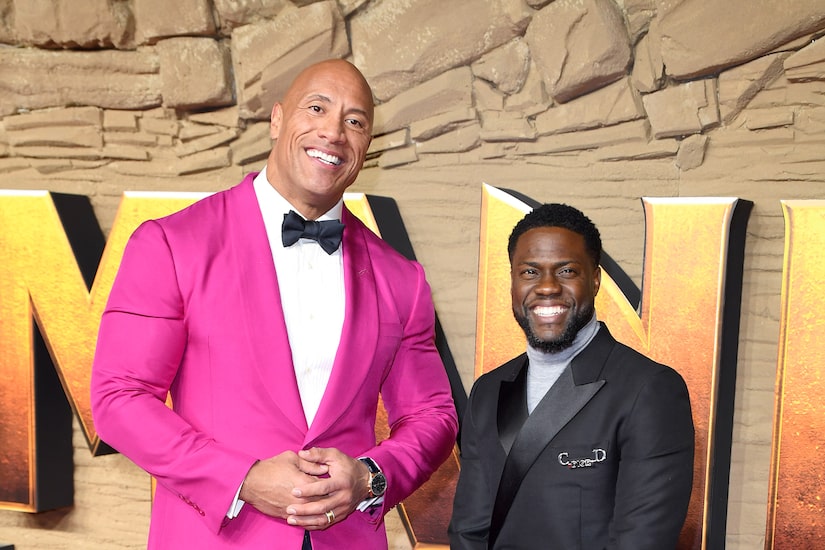 “Extra’s” Jenn Lahmers spoke with the duo about their new movie and their families.

In real life, the two have a bromance and share a deep love of their families.

The proud dad shared, “She had her debut in NXT, And she did a great job. Nice and composed, which is always a key in that world.”

When Kevin asked him if it was “the biggest compliment” to have his daughter go that route, he answered, “Of course. I love that world. That was and will always be — it’s like for you and comedy standing on that stage, me in a wrestling ring. It’s my passion.”

Kevin, the father of four, quipped, “My kids want nothing to do with what I do. “

He elaborated, “They want absolutely nothing. ‘You guys thinking about becoming comedians?’ No!”

They might not be comedians like Hart, but he has a feeling that his daughter “will probably end up acting.”

Dwayne joked, “It’ll be great to finally have an actor in the family.”

Hart’s “creative” daughter is “learning a lot” about the business while interning for him.

On a serious note, Dwayne is buying a new house for his mom!

Kevin busted Dwayne’s chops, saying, “A billion dollars later, he finally bought his mom a house. Should we clap for that? I think the whole room right now is thinking the same thing. It’s about f**king time. ‘Hey, Mom, look what I got you!’”

Dwayne responded to the jab, “Listen, I have been lucky enough to buy her homes over the years after she got divorced from my dad, thank you very much. You happy now? Happy to bring that up?”

Johnson recalled, “It was a beautiful moment. We were away, we went to Hawaii, and then when we were in Hawaii I told my team just completely decorate the house. So when she came in, she hadn’t see anything.”

Kevin revealed that he bought his mom a home with his “first check.”

Kevin and Dwayne have worked together on five movies, with Dwayne joking that it “feels like forever.”

When asked how many more movies they’ll do together, Johnson quipped, “Moving forward, it will be zero.”

The two guys also trolled each other while discussing pets and what they would do if they were each other’s pets for a day. Watch!