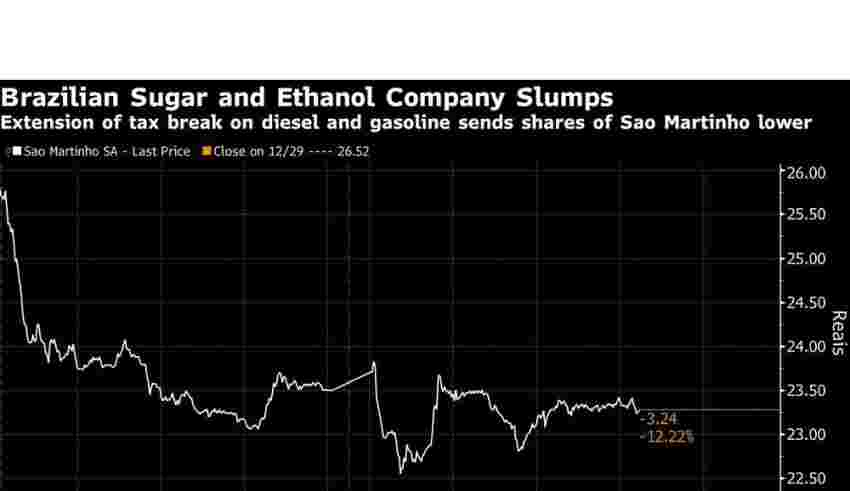 (Bloomberg) — Shares of Brazilian sugar and ethanol producers are getting pummeled at the start of the year after President Luiz Inacio Lula da Silva decided to extend a tax break on a variety of fuels.

Sao Paulo-based Sao Martinho SA has plunged 12% to become the worst-performing name on the 89-member Ibovespa equity index in January, while Raizen SA, a joint venture between Royal Dutch Shell and Brazilian conglomerate Cosan SA, is down over 9% in the first two sessions of 2023.

The weakness has been fueled by the president’s move to extend the tax break for gasoline and ethanol for two months, in a nod to consumers. The exemption has the majority of local mills selling ethanol below production costs, according to an industry group. The decision also reduced to zero certain taxes on diesel, biodiesel, liquefied petroleum gas and natural gas until Dec. 31.

Adecoagro, the US-listed agricultural company that operates across Argentina, Brazil and Uruguay, slumped as much as 10% in New York on Tuesday.

Last month, Morgan Stanley downgraded shares of Sao Martinho to a sell-equivalent rating, in anticipation of a sugar surplus. Brazil’s sugar output could rise to a near-record 40 million metric tons for 2023-2024, according to the bank.

More than the tax exemption itself, analysts are concerned about the potential for further intervention in fuel prices after Energy Minister Alexandre Silveira said the government needs to protect consumers from fuel-price volatility.

The risk is that ethanol prices in Brazil would be capped, potentially hurting mills’ cash-flow generation and restricting their ability to invest, said Ana Zancaner, an analyst at commodities trader Czarnikow.

—With assistance from Tatiana Freitas.