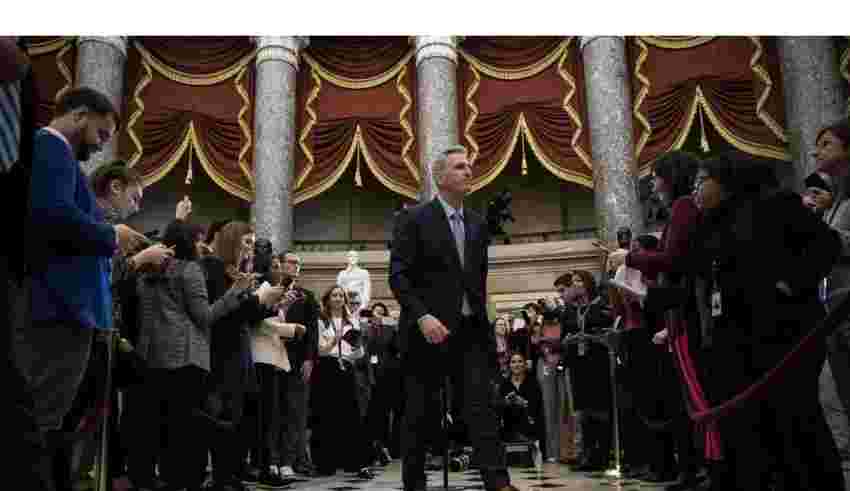 Fresh from a leadership struggle that lasted more than four days and raised questions about his party’s capacity to fulfill basic functions of governing, McCarthy now confronts a Democratic-controlled Senate and White House at the helm of a slender, fractious House majority.

The ideological divisions, distrust and grievances that flared over 15 ballots to pick a House speaker — usually a formality at the opening of a new Congress — signals difficulties ahead in mustering votes for essential tasks such as keeping the government open and avoiding a US credit default.

McCarthy, 57, secured election only because six GOP dissidents switched from opposing him to abstaining. That puts him on notice that any five can block legislation not supported by Democrats — or oust McCarthy if they disagree with a compromise he strikes.

One thing is certain: President Joe Biden will face a squeeze on funding for Democratic priorities and two years of scrutiny of his administration from congressional investigations.

While McCarthy offered a customary nod to hopes of cooperation with political opponents, he concentrated on unifying Republican populists by taking aim at common enemies: the Internal Revenue Service, the Chinese Communist Party and “America-Last energy policies.” He promised one of the new House majority’s first hearings would be held at the US-Mexico border.

The agenda largely reflects midterm election campaign pledges McCarthy made as a GOP “Commitment to America,” a branding that evokes a high point for congressional Republicans — when they swept into a commanding House majority in 1994 running on Newt Gingrich’s “Contract with America.”

Congressional Republicans’ disappointing performance in the November election is at the core of McCarthy’s problems. He can’t afford to lose even five Republican votes if all Democrats are present and voting against him, hemming in his ability to deliver results from the start.

McCarthy promised a rule change to allow a single member to call for a vote to oust the speaker. His other commitments include doling out plum committee assignments, such as giving members of the far-right Freedom Caucus three of the GOP’s nine seats on the committee that determines which bills can make it to the House floor. Also, any member would be allowed to offer almost any relevant amendment to bills.

“There will be a lot less legislation written in the speaker’s and leadership offices,” said House Rules Committee Chairman Tom Cole, an Oklahoma Republican. “So, we’ll see how it works.”

McCarthy also gave in to demands from GOP hard-liners to use the federal debt ceiling as a bargaining chip to force spending cuts and to cap fiscal year 2024 spending across the government at 2022 levels, which would mean significant cuts to many programs.

Both concessions heighten the risk of a market—rattling showdown with the Senate and White House.

Some of the populists aligned with former President Donald Trump who were strengthened by the rules changes have criticized continuing military aid to Ukraine against Russia’s invasion. However, a broad House majority supports that funding.

A long-standing safety valve in the House rules could be pivotal in the next two years in overcoming internecine Republican fights: a so-called discharge petition which allows a bipartisan majority of the House to force a vote on legislation that the majority party’s leadership won’t allow to reach the floor.

With Democrats in control of the Senate and White House, most of McCarthy’s agenda has little chance of becoming law in the next two years. But the legislative record of a Republican House will demonstrate to the public and GOP activists what the party has to offer going into the 2024 presidential election.

In addition, House probes into the Biden administration provide a chance to focus and amplify GOP criticism of the president, who says he intends to run for re-election.