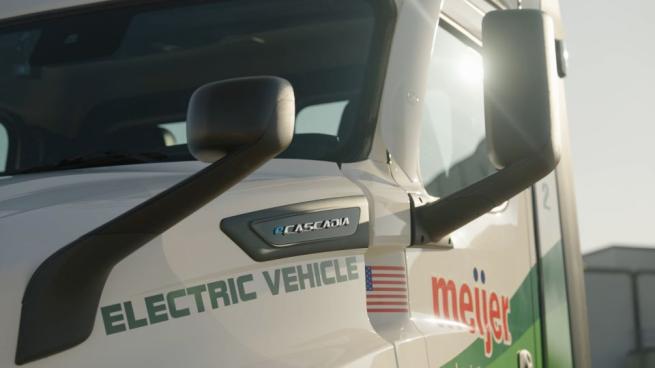 Michigan-based Meijer was one of the first retailers in North America to implement the EPA’s near-zero emissions standards in 2009, and is now expanding its efforts by deploying two of the first all-electric semi trucks in cold weather.

Additionally, as part of a grant from the U.S. Department of Energy, the company will be tracking the performance of its Freightliner eCascadia semi-trucks in these environments. Meijer will be reviewing temperature impact on mileage, charge times, battery life optimization, and driver comfort on a daily basis.

[More: Amazon Rolling Out Electric Delivery Vehicles Across the U.S.]

“Our company’s earliest beginnings were marked by doing what’s right while keeping an eye toward innovation. That philosophy still guides us today and is exemplified by our company’s commitment to lessening our carbon footprint,” Meijer president and CEO Rick Keyes said in a statement. “We’re excited to continue our longstanding partnership with Freightliner to pave a sustainable future for the industry.”

The two trucks will operate out of the company’s Lansing distribution center, which is now equipped with charging stations. While Meijer received the battery electric trucks earlier this month, they will now make multiple deliveries daily to Meijer supercenters within a 200-mile radius of the distribution center.

They are a zero-emission version of Cascadia, suited more for short-haul routes with depot-based charging. They have a typical range of 230 miles, depending on the truck’s configurations, and can recharge 80% in about 90 minutes. The trucks are also equipped with Active Side Guard Assist technology, which detects when a pedestrian or moving cyclist is on the passenger side of the truck.

Meijer became a test fleet for Freightliner in 2009 and was selected in 2019 to test the manufacturer’s battery electric semi-trucks. Following the successful test period, Freighliner will be rolling out several trucks to customers in addition to Meijer.

“Through this partnership, we can help accelerate the industry’s transformation to electrification by applying valuable insights from data collected and real-world applications in a cold climate environment and make a meaningful difference when it comes to reducing greenhouse gas emissions,” said Mike Graham, senior vice president of supply chain and manufacturing for Meijer.

Other Brands Jumping on the EV Trend

Walmart partnered this summer with electric vehicle startup Canoo to purchase 4,500 all-electric delivery vehicles with the option to purchase up to 10,000 units. They will be used to deliver online orders in a sustainable way, contributing to Walmart’s goal to achieve zero-emissions by 2040.

This is part of Walmart’s plan to overhaul its transportation strategy, moving away from diesel and toward compressed natural gas, using liquid hydrogen to fuel its forklifts across its grocery distribution centers, and exploring how it can can leverage more electric technology in its own fleet.

Also this summer, Amazon announced the rollout of “thousands of Amazon’s custom electric delivery vehicles in more than 100 cities by the end of this year — and 100,000 across the U.S. by 2030.” Amazon customers will first see the electric vehicles in Baltimore, Chicago, Dallas, Kansas City, Nashville, Phoenix, San Diego, Seattle, St. Louis, and other cities.