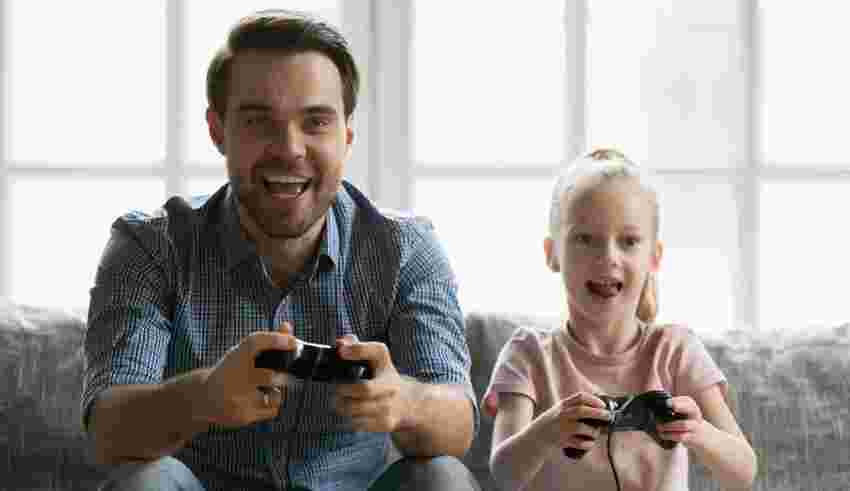 The Entertainment Software Association of Canada (ESAC) has released its latest biennial ‘Essential Facts’ survey, which reveals a variety of statistics related to Canadian gamers.

Canadians have been playing a bit less now that COVID restrictions are down.

For Jayson Hilchie, ESAC president and CEO, this isn’t exactly a surprise, given how many more COVID-19 restrictions there were two years ago.

“People have just wanted to get outside, and people want to do things they couldn’t do during COVID. I don’t think it was a huge surprise for us that we were going to see a drop,” he says. “I think what we’re seeing people temporarily deciding that they want to do things they couldn’t do, and gaming filled such an important part of their lives during the pandemic that for many people, they wanted to go and do something else. And that’s okay. I totally expect that these people are going to continue to game, but it’s okay to take a break, and it’s okay to do something else.”

That said, the interest in games remains consistently strong across Canada. While there are some standouts, like Manitobans playing the most at nine hours per week (above the overall 7.9-hour average) or B.C. having the highest gamer population at 59 percent, the number of gamers per province is uniformly above 50 percent, which Hilchie says he’s happy to see. 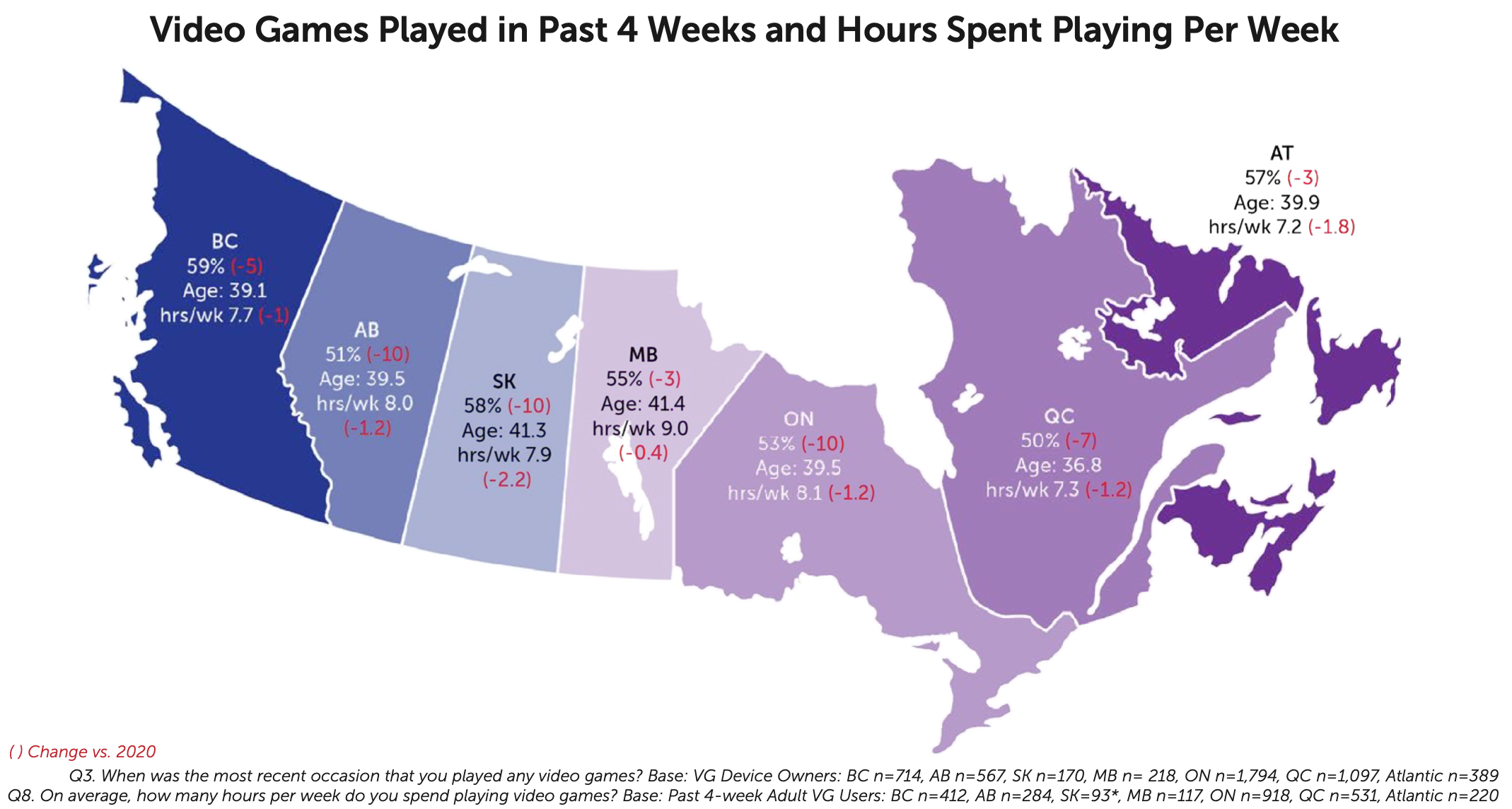 All provinces were gaming less overall, but some have been playing more than others.

“We have a balanced population of people who play video games. It doesn’t matter if you live in Newfoundland, or if you live in Manitoba or British Columbia. I think that’s what’s important,” he says. “If there was one province that was off, compared to some of the others, I would be asking [why], but for the most part, what I see is a balanced country of a very similar demographic playing video games from coast to coast.”

Games as a form of connection

Across the board, the ESAC also wants to highlight games’ unique ability to bring people together. Indeed, the top two reasons respondents provided for playing games were the ability to socially interact with others (35 percent) and play/compete against others (34 percent). Tied for third place with 25 percent, meanwhile, were cooperating with others through games and collecting trophies and achievements. 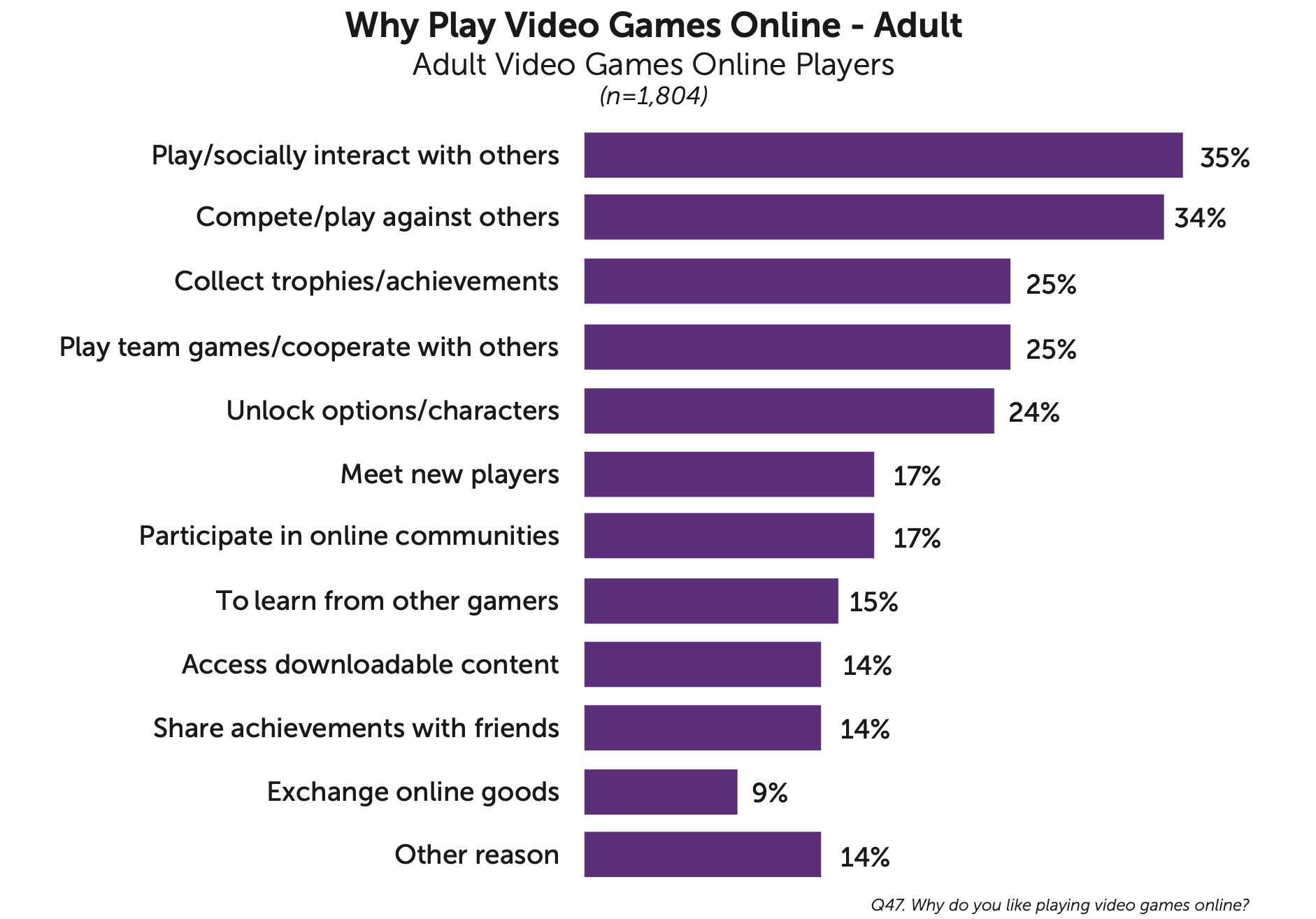 Canadians have many reasons for gaming, but some of the top ones are to connect with others.

“Video games are playing such an important part of people’s lives. It’s really moving a lot more to online gaming, people seeing games, both as a form of entertainment, but also as a place to hang out with their friends to meet new people,” says Hilchie. “One of the cool statistics is 38 percent of people have either met a really good friend or a spouse through video gaming. 38 percent of people — that’s a lot. That’s more than one-third of people doing something I would consider to be really significant.”

Companies are clearly looking at this, too, with big multiplayer games like Fortnite and Call of Duty bringing in millions of players per month. A number of popular social-focused games are even made in Canada, including Rainbow Six Siege (Ubisoft Montreal), Warframe (London, Ontario’s Digital Extremes) and FIFA 23 (EA Vancouver), all of which help contribute to the national games sector’s $5.5 billion annual contribution to Canada’s GDP.

Thrilled to welcome @HavenStudiosInc and @PlayStation to Montreal this morning. This is PlayStation’s first internal studio in Canada and we can’t wait to see what @ibjade and team are working on! Congratulations! #cdnpoli #haven #playstation pic.twitter.com/te6YiMuSxp

Perhaps the biggest testament to this broader push for online games can be found at PlayStation, a company best known for blockbuster single-player experiences like Marvel’s Spider-Man, Horizon Forbidden West and God of War Ragnarök. The gaming giant plans to launch more than 10 live service games by 2026, and as part of those efforts, it recently acquired its first-ever Canadian studio, Montreal’s Haven, to develop an ambitious cloud-based title.

Hilchie, who was at the launch of Haven, says he has “a lot of respect” for studio founder Jade Raymond, a veteran of the industry who co-created Assassin’s Creed and helped found Ubisoft Toronto (Far Cry 6) and Montreal’s EA Motive (Star Wars: Squadrons).

“Just the name of the studio, Haven — it’s a haven for game developers that wants to do something different,” he says. “But at the end of the day, the majority of video game players are playing online, because they want to connect with others, they want to immerse themselves in worlds, they want to see themselves represented. And anything that video game companies can do to cater to those needs, I think is going to be reasonably successful […] I’m optimistic about what they’re going to do — not just Haven, but just across the entire industry, of being more representative of the players.”

Parents are playing more with their kids.

The 2022 survey also found that games continue to reach older audiences. In particular, 74 percent of parents who play games say they do so with their children, an increase of nine percent over the past two years. Hilchie says part of this is just due to the number of kids who continue to become interested in games, but another factor is that modern parents themselves have grown up with games. 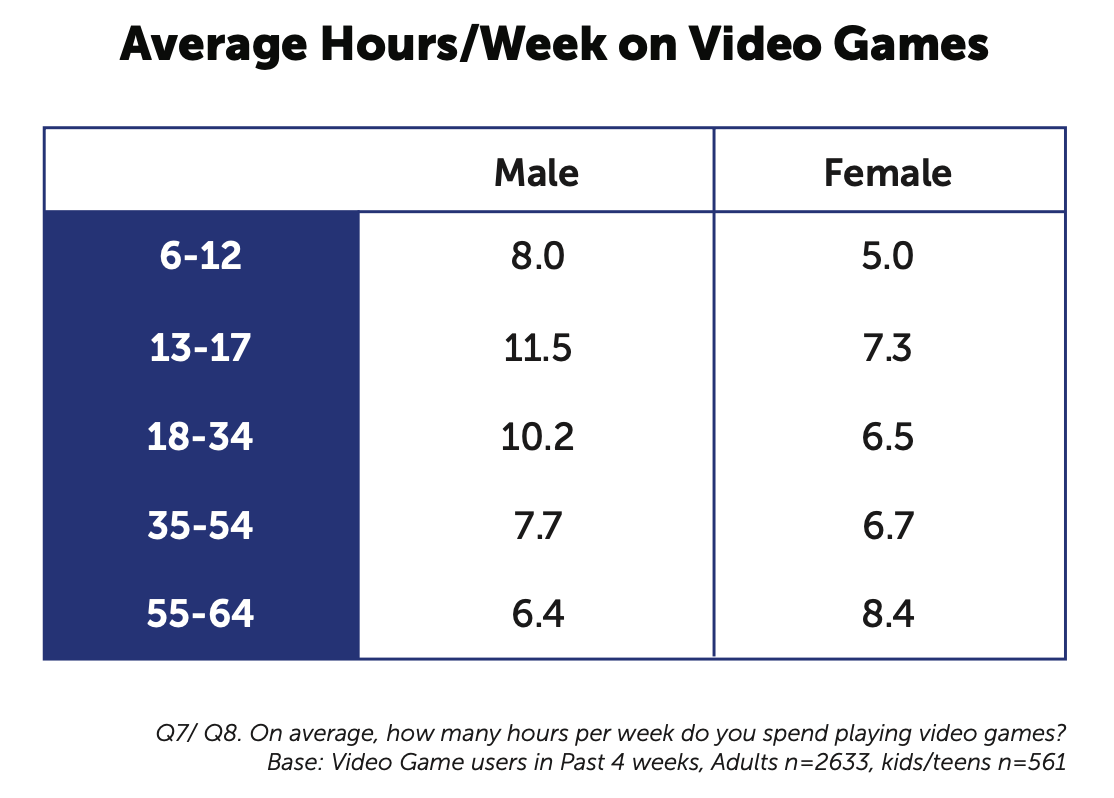 Older women are taking to games more than men in the same age groups.

What we also see in the survey is that more women in older demographics are turning to games. While the overall split of gamers once again is about 50-50, and more males in the 6-12, 13-17 and 18-34 age groups spend significantly more time playing games, this disparity, on average, shifts significantly in the older demographics. Among those aged 35-54, males spent an average of 7.7 hours per week versus 6.7 per week for women, a much smaller gap than in the other age groups. What’s more, women aged 55-64 actually played more than men — 8.4 hours versus 6.4 hours per week, respectively.

While Hilchie notes that it isn’t easy to pull a larger narrative from this, he says he thinks it points to how popular mobile games have become, and how their accessible nature appeals to older demographics.

Looking ahead, there are two areas that Hilchie says the ESAC is focusing on.

The first is the recently launched Global Video Game Coalition (GVGC), a collaboration between the ESAC and its counterparts in the likes of the U.S., Europe and Asia to raise awareness about the benefits of gaming. That includes working with the likes of the United Nations and World Health Organization (WHO), the latter of which controversially added “gaming disorder” to its list of illnesses a few years ago.

Launching the Global Video Game Coalition in Geneva. Our VP, Policy & Government Affairs @PMFogolin along with representatives from K-GAMES, the Korean trade association for the video game industry. #gvgc pic.twitter.com/Vne1fh0i1Z

Part of that is the latest Essential Facts survey, which he says raises a lot of points the GVGC brought up to the WHO. “We’re pushing a narrative right now of video games being a social, community-building, relationship-making place for people to go that is positive in people’s lives. It’s improving people’s well-being, their mental health — people are happier, they have more joy, when they play video games.”

While he notes that the gaming disorder isn’t going to change, there does seem to be an “openness and a willingness from the WHO” to explore the positive impacts of games.

“Because they’re not mutually exclusive. One can be true along with the other at the same time. And I think that’s really where the industry is trying to go, which is, ‘Okay, gaming disorder is over there, we realize that a small number of people may excess in video game play and they need to get the treatment they need to get. But over here, video games are improving so many more people’s lives by helping well-being, helping them connect, and so on.’”

Our industry needs to lead on diversity, equity and inclusion and @2K is doing just that! A great initiative! https://t.co/XjNSd4mCXm

The other area that Hilchie singles out, as he’s mentioned before, is continuing to work to get more women interested in games.

“There is evidence out there that girls who play video games are three times more likely to get into STEM curriculum programs and get into making them. And so the more girls, especially younger girls at early stages of their lives, get interested in video games and interested in technology and computer programming and animation, hopefully, the more we will have entering the programs that allow them to then get into the industry […] We do need to be able to get more and visible minorities into the industry and be more representative of the players who play our game, but also being more representative within the people who are making them, because obviously that’s going to make the games better for everybody.”