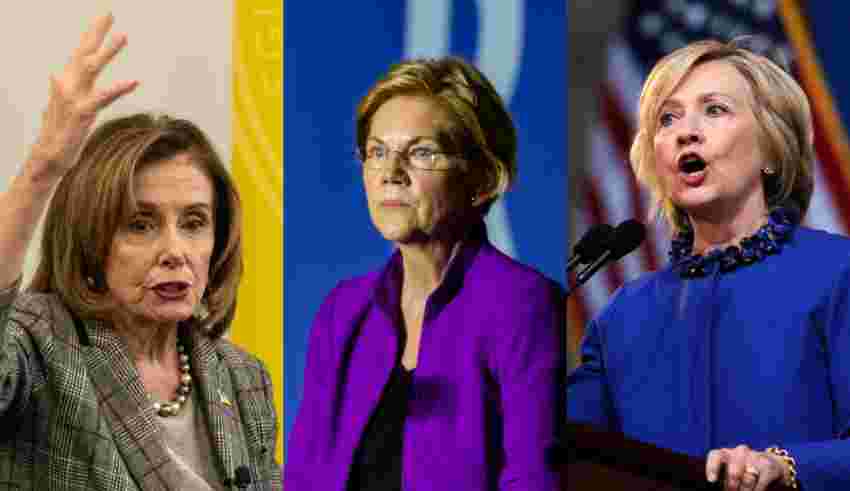 PORTSMOUTH, OH – With the invention of synthetic and plant-derived glue in the commercial industries, the animal glues (made from elderly horses) disappeared from the factories. Whew – these three nags are spared from being bottled and sold across the nation.

Now it’s time for the toxic trio to turn in the towel – they’ve done enough damage to the U.S. Republic via fearmongering, temper tantrums, and socialist policies. These quacking queens of covert communism need to ride off into the sunset – destination pasture of repentance. They can graze on the grassland of guile and guilt. (un-huh)

Nauseous Nancy. “Rumors have swirled for weeks that Pelosi, who turns 82 in March, will leave Congress at the end of this term — especially if Democrats receive the walloping forecast by most polls,” according to the New York Post. Hurrah! Please let the rumors ring true. Here’s hoping naughty Nancy will lose the speaker’s gavel ASAP.

What does the future hold for fancy Nancy? An orange jumpsuit or a book tour.  CRIMINALS R US – a title for her future memoir.

A recent commentary in The Western Journal asked, “Will Nancy Pelosi Finally Be Dethroned?”

Loutish Lizzy. In a recent op-ed in the New York Times, (aka NY Slime) Sen. Elizabeth Warren (D-MA) whined, complained, and called on Democrats to get “aggressive” towards Republicans due to midterm results and the close race for the Senate. Living in la-la land, fizzy Lizzy praised czar Biden for saving democracy. Argh. WHINERS R US should be her new slogan.

Let’s take over look at her pompous public meltdown on YouTube. “Elizabeth Warren SCREAMS like a Banshee over Supreme Court Opinion on Abortion!”

Hypocrite Hillary. Don’t go away mad – just go away. No doubt, the liberal history books will heap praise upon Hildebeast. But the burning question remains: Will Frau Clinton run for president in 2024 if bumbling Biden is cast aside?

A 2020 opinion piece in the Washington Examiner asked the question: “Why won’t Hillary Clinton just go away?” The commentary continues, “The former secretary of state’s many public appearances over the past three years have served the sole purpose of allowing her to name and blame persons, places, and things she believes caused her to lose in 2016. Many of them, she says, robbed her of her rightful spot behind the Resolute Desk. Clinton lives now to mourn her failed candidacy and to lash out at anyone she deems to have been insufficiently loyal.”

Fast forward to 2022. Hell-bent Hillary, still out to ravage revenge upon President Donald Trump and MAGA supporters, continues to hurl her hatred – before, during, and after the midterm election. HATERS R US is her mantra.

Time to put the three twisted sisters out to political pasture. Can we vote on it?

By the way, being a female over 60 years of age allows me the privilege of poking fun at other aging ladies. So woke women need to cool their jets – because all of us will be put out to pasture someday.