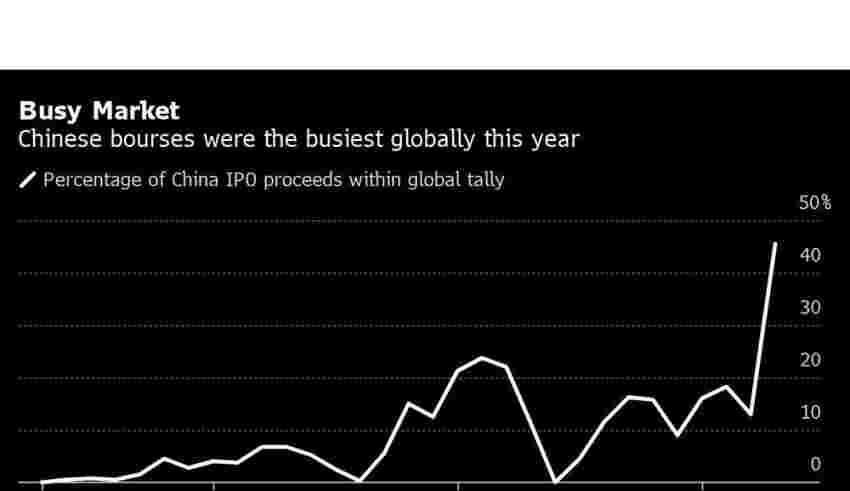 (Bloomberg) — Chinese companies raised a record amount in initial public offerings at home this year, defying a global slump. And with the end of Covid Zero in sight, 2023 could be set for another strong showing.

Listings in Shanghai, Shenzhen and the recently inaugurated Beijing exchange brought in $92 billion this year, according to data compiled by Bloomberg. That’s propelled China’s share in the global tally for IPO proceeds to 46%, nearly four times the US, from just 13% at the end of last year.

After a push by local authorities in recent years, a slew of factors have enabled the feat. Policy easing in the Asian country have been a key catalyst just as rising borrowing costs deterred listings in traditional venues such as Hong Kong and London. At the same time, China’s crumbling real-estate market forced many investors to look for an alternative to put their money to work.

“The pipeline of high-quality Chinese companies with ambitions of an IPO has only grown during 2022, and will continue to do so throughout 2023,” said James Bean, an ECM portfolio manager at Myriad Asset Management. “Many of these will look to raise capital as soon as there is further evidence of success in the transition to a post Covid-Zero economy and support for the domestic labor market,” among other reasons, he said.

Past performance has also played a role in luring buyers. Newly listed shares in China tend to fare much better on average than the overall market due to valuation rules that regulate IPOs.

Overall, there have been 391 debuts in China this year. Nine of them raised above $1 billion, accounting for about 40% of all deals of that size or bigger globally. New York bourses hosted only two IPOs of that magnitude, Hong Kong had three and Europe had just one, in Germany.

China’s domestic pipeline for next year is solid. About 376 companies have announced IPO plans over the past six months that are now under pending status, data compiled by Bloomberg show, meaning they could go public in 2023.

Some of the largest deals early in the year were a consequence of Sino-American tensions. Telecom provider China Mobile Ltd. and energy producer CNOOC Ltd. both listed at home after being kicked out of the US market following their inclusion on a blacklist created during Donald Trump’s administration. In China, they raised $8.6 billion and $5 billion, respectively, and are trading well above their listing prices.

Changes to a registration system for listings over past years helped boost the interest of issuers, as they simplified the overall procedure. The reform was first tested in Shanghai’s Star Board for tech companies, and then introduced in Shenzhen’s ChiNext Board in 2020. There were expectations it would be expanded to the entire onshore market this year, but that has yet to materialize.

Yi Huiman, the chairman of the China Securities Regulatory Commission, said during a forum in November that reforms should be deepened going forward.

Activity also picked up for additional share sales after the government in November ended a ban on listed companies selling more shares at home. Some 17 listed Chinese property developers or firms with real estate businesses announced plans to raise more equity funds since Nov. 28, the Financial News reported on Thursday. Thirteen of them are expected to raise a combined 90 billion yuan ($12.9 billion), according to the report.

For potential first-time share sales, Hu highlighted sectors tied to China’s reopening story, including consumer goods and hotels. “Additionally, EV/battery-related and solar is an important theme that people have been talking about for some time,” she said. “That includes carbon neutral and new energy companies.”

Shares of mainland IPOs are up by a weighted average 29% this year over their listing price, versus a 5.5% increase in New York and a 6.2% drop in Hong Kong.

Investors should become selective as more companies go public, potentially leading to a decline in returns by IPO stocks, according to Aoping Zhang, dean of privately-run Zengliang Research Institute in Beijing.

“The number of companies to trade below their IPO level will increase in the future, as the more companies list, more investors focus on the quality and valuation,” Zhang said. “But as you can see, some of new stocks can still provide investors with great returns. Meanwhile, regulators are paying more and more attention to protect individual investors.”

To be sure, the domestic market cannot entirely fulfill funding needs for Chinese companies. Valuation rules are strictly set by regulators, the investor universe is not nearly as diversified as in Hong Kong, and the time needed ahead of a listing is much longer than abroad.

With the US market almost entirely shut for Chinese issuers, many of those listed in the mainland chose to sell shares in Europe, particularly in Switzerland, a trend that is also seeing continuing next year. More large-size listings could also return to Hong Kong once market sentiment improves.

Meanwhile, local banks have vastly dominated the underwriting of Chinese onshore IPOs this year, according to data compiled by Bloomberg. Citic Securities Co. Ltd., China International Capital Corp. Ltd. and China Securities were the top bookrunners, with a combined market share of about 42%, the data show.

“The momentum is likely to continue due to companies’ fundraising needs as well as the anticipated uptick in the overall economic activities as a result of the eventual relaxation of Covid-related restrictions,” said Meng Ding, a partner at Sidley Austin LLP in Hong Kong.

—With assistance from Pei Li, Swetha Gopinath and Julia Fioretti.