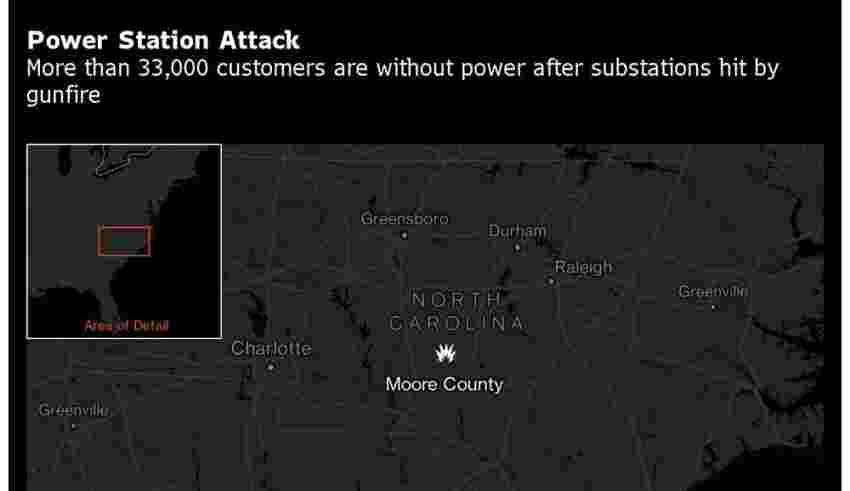 (Bloomberg) — The attacks that left two electrical substations in North Carolina riddled with gunfire and knocked out power to about 45,000 homes and businesses underscores the fragility of US grids, experts said Monday.

The FBI is investigating the assault which left “extensive damage” to the substations in Moore County, North Carolina. The destruction was discovered around 7 p.m. Saturday evening, county sheriff Ronnie Fields said in a news conference Sunday.

“From this incident, it appears that the electrical grid continues to be extremely vulnerable,” said Jon Wellinghoff, chief executive officer of GridPolicy Consulting Inc. and former chairman of the Federal Energy Regulator Commission.

Wellinghoff added that grid experts like himself have raised the alarm for years and that the high-voltage North Carolina substations should have been better protected. “Here we are in 2022, and these vulnerabilities still exist.”

“FBI Charlotte is investigating the willful damage to power facilities in Moore County,” a representative from the Federal Bureau of Investigation said in an email Monday afternoon. The FBI is in contact with local law enforcement and the private sector, the official added. The two substations are about 10 miles from one another, according to the power company.

“It was targeted. It wasn’t random,” sheriff Fields said at the news conference. “I call them cowards.” A county-wide 9 p.m. curfew was implemented to protect citizens and businesses.

There are several reforms that would protect the grid, said M. Granger Morgan, an engineering professor at Carnegie Mellon University. First, install walls or visual barriers so gunmen can’t aim directly at transformers and circuit breakers. And second, create a coherent national strategy to protect the grid instead of leaving the task to state regulators.

“We have substations sitting out in the open all across the country,” said Morgan. “We’re still very vulnerable.”

While such attacks are rare, they have happened before. Three men pleaded guilty in February after planning to attack substations in different US regions to incite civil unrest. About 13,000 customers lost power when gunfire damaged a Utah substation in 2016, while a California substation was damaged by gunfire in 2013, forcing the state grid operator to call for conservation in the area.

The Biden administration is watching the North Carolina investigation and monitoring the situation closely, National Security Council spokesman John Kirby said Monday. “I think the President would be the first to admit that there’s a lot of work left to be done when it comes to infrastructure security,” he said.

Fields said authorities were investigating if there was a link between the attack and protesters of a local drag queen show, though no evidence had been found tying the two.

—With assistance from Ari Natter, Will Wade and Justin Sink.

(Story updates with additional quotes and information throughout.)