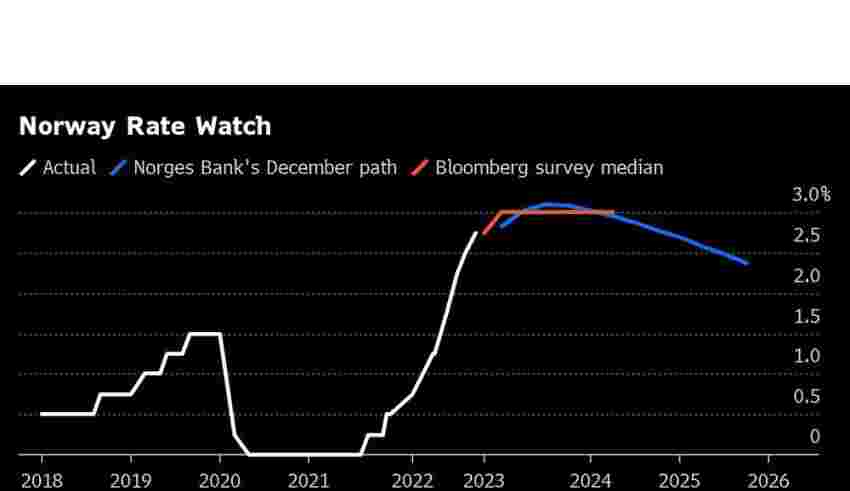 (Bloomberg) — Norway’s central bank will probably pause its monetary-policy tightening this week after inflation slowed from a three-decade high.

Officials are poised to keep the benchmark interest rate unchanged on Thursday at 2.75%, according to 10 economists out of 18 surveyed by Bloomberg. The rest predict a quarter-point hike that would take borrowing costs just below the level projected by the central bank as the peak.

Norges Bank was the first institution from the G-10 group of major currency jurisdictions to start raising rates, back in September 2021. Officials have signaled in past months that tightening may be close to concluding after the outlook for the fossil-fuel-rich economy worsened and inflation eased.

“We are very confident that Norges Bank will stay put this Thursday and rather increase the key rate to 3% in March,” said Dane Cekov, senior macro & FX strategist with Nordea Bank Abp in Oslo. “Norges Bank has really changed gears now and will tread more carefully.”

He expects rates to stay on hold at 2.75%, along with all forecasters in the Nordic region, while only a few global institutions have joined their projection.

Central banks in Australia and Canada have also signaled they are nearing an end to rate hikes. While the European Central Bank has signaled more increases in borrowing costs, its officials are pondering whether to start slowing down in due course.

In Norway, Governor Ida Wolden Bache said last month the key rate will be “around 3%” in 2023 if the economy develops as expected. The central bank’s peak projection of 3.11% suggests the door hasn’t been shut for one more quarter-point hike.

No new economic forecasts or projections for rates will published on Thursday, as this week’s meeting is a so-called interim one. Forward-rate agreements, used to speculate on borrowing costs, signal 55 basis points of rate hikes by June.

Officials will have been encouraged by a drop in headline inflation to its lowest level in seven months in December. Even so, core price growth defied their forecasts by slightly picking up pace. Norges Bank expects underlying inflation to peak this month and next after food retailers flagged price-hike plans and with rents seen rising.

The government has indicated it’s determined to do all within its powers to stem inflation, including a probe by competition watchdog into grocers’ price hikes.

Finance Minister Trygve Slagsvold Vedum said earlier this month that, for the first time in a generation, Norway will have to use less money to resolve a crisis instead of boosting funding.

Other economic data have supported the case for more rate hikes beyond the current quarter. The economy defied Norges Bank’s forecast and kept expanding in October and November. Unemployment has been stronger than anticipated and a drop in house prices unexpectedly halted.

Nordea’s Cekov said policy makers may want to wait before deciding on the level of peak rate until an outcome is reached in centralized wage negotiations.

Labor unions are due to decide on demands at the end of next month, with an end-March deadline for an agreement with employers. Last year’s wage accord set a pay increase of 3.7%, while the government anticipates an increase of 4.2% for this year.

“All the while Norges Bank knows higher rates will eventually bite, there are signs that core inflation could stay high for longer,” Kjetil Martinsen, Swedbank AB’s chief economist in Oslo, said in a report. “This should imply Norges Bank also should lean toward a higher terminal rate – potentially hiking again in June.”

—With assistance from Zoe Schneeweiss.