Pentiment is the next project from Microsoft studio Obsidian Entertainment, the developer behind the likes of RPG heavyweights Fallout: New Vegas, South Park: Stick of Truth and The Outer Worlds is taking a sliver of its team to focus on a more intimate passion project.

Branching off from working on Grounded, The Outer Worlds 2 and the upcoming Avowed, a small team is focusing on the historically-driven experience known as Pentiment. Rather than lean on its expertise in RPGs, Pentiment exercises the team’s narrative and artistic abilities. Throughout the bulk of development, only 10 developers were working on the title, although that’s risen to 13 in the past year.

Pentiment is set in 16th-century Upper Bavaria during the Holy Roman Empire. The game covers the Reformation, the Revolution of 1525, and the introduction of Copernicus’ heliocentric model of the solar system. Players take on the role of Andreas Maler, who is described as a clever artist. Andreas becomes entangled in a series of murders across a 25-year span. MobileSyrup had the privilege of sitting down with Josh Sawyer, Pentiment’s game director and Hannah Kennedy, the game’s art director to hear more.

While Obsidian Entertainment has a penchant for deep RPG mechanics, Pentiment is instead described as a narrative adventure. As Andreas, players interact with various characters in two core communities. The first is the Keirsau Abbey, which is described as a “secular community,” and Tassing, a “religious community.” Andreas moves between them, navigating relationships and exploring this world. 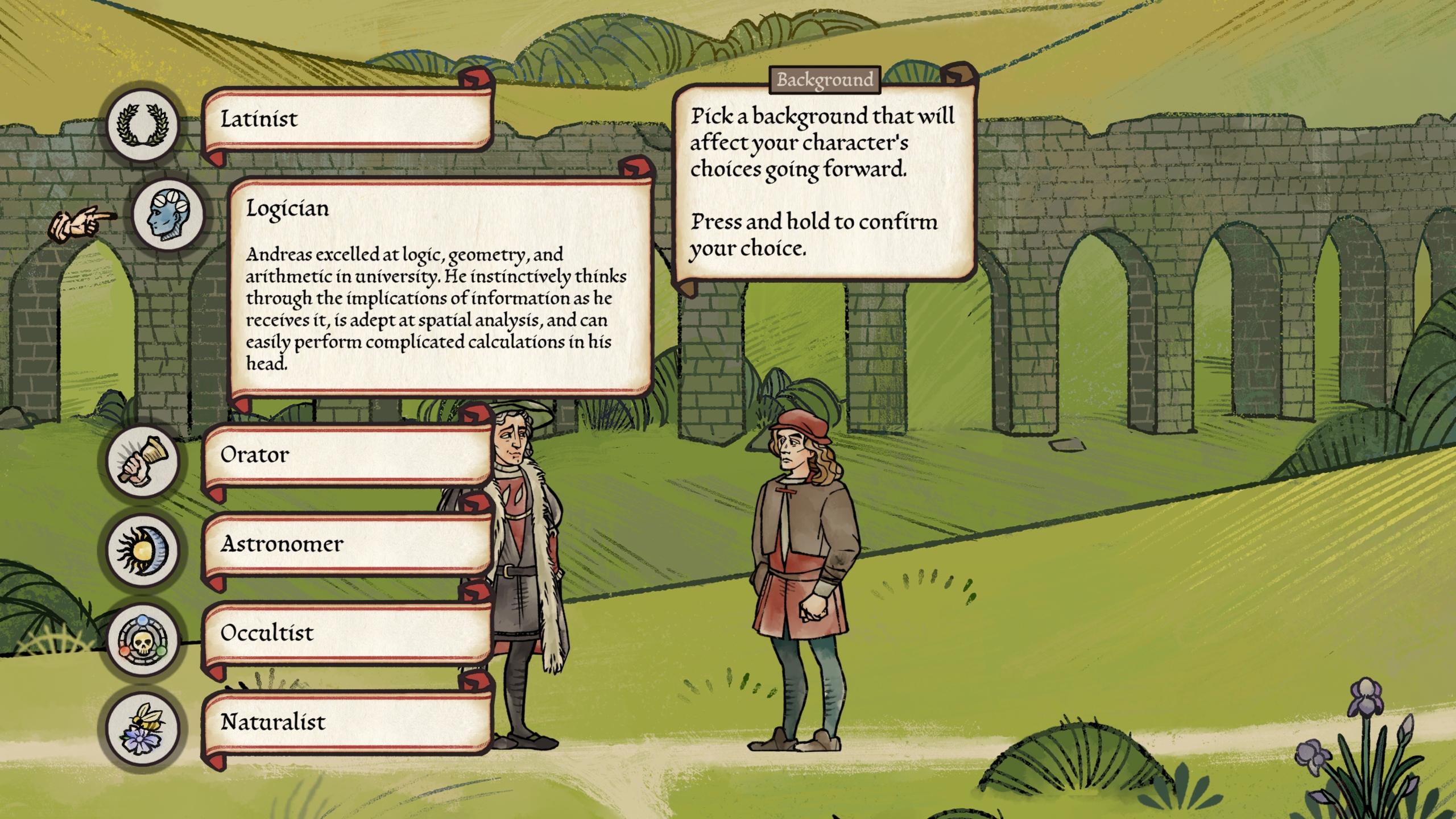 While not a traditional RPG, Pentiment does feature some light RPG systems, including dialogue options. For example, early on in Pentiment, players are asked about Andreas’ university education. At the time, it is quite unusual for an artist to possess a high level of education. Nonetheless, players are able to choose from a shortlist including Orator, Naturalist, and Astronomer. The choice made in this conversation is not only reflected immediately but also affects Andreas’s decisions moving forward throughout the game. Sawyer explains that players have access to Andreas’ journal. Here, players see a breakdown of the character’s backgrounds that are selected and the ways in which they influence the gameplay.

Obsidian Entertainment aims to make Pentiment a game that is accessible to a wide variety of players. Perhaps the setting and art book-page aesthetic aren’t what will immediately attract a player. However, given that it is launching day one on Xbox Game Pass, the team hopes to accommodate players of all nature. “Our focus with this game was really to make it quite simple and easy to play. It’s not a game that’s really super challenging,” Sawyer tells us.

Pentiment offers a minimalist control scheme and is said to be forgiving. Minigames are implemented for “vibes and immersion” and not to be challenging for the player. For instance, Andreas is asked to arrange a series of paintings. It’s a very simple task where players approach it almost like a point-and-click game. Afterward, Andreas is asked to remove a religious cross from the wall. Players can then choose what to do, accepting any ramifications. 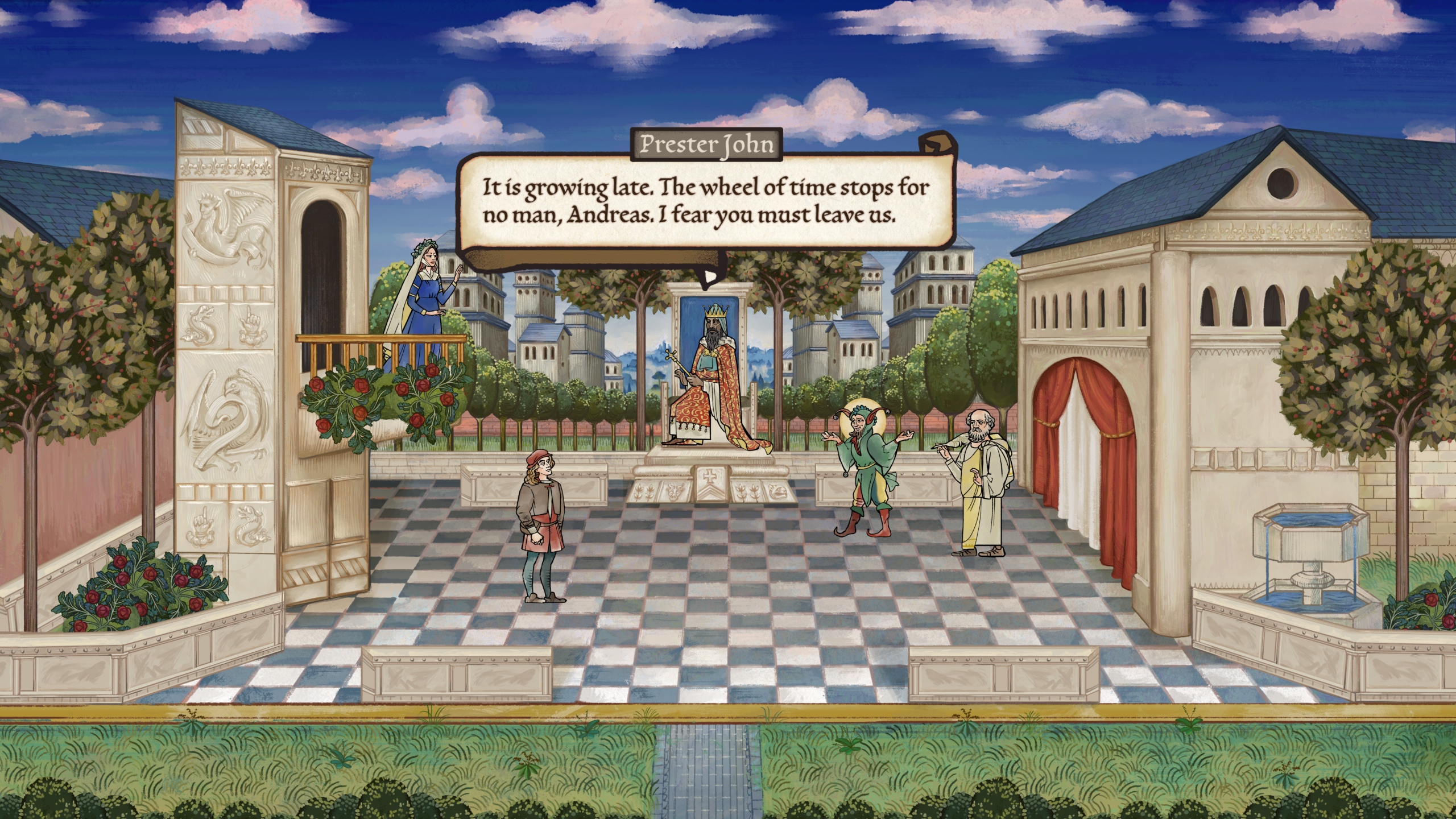 Many fonts in the game are inspired by the historical setting. In a traditional sense, dialogue and other text are directly inspired by handwriting from the 16th century. This extends into the first instance of printed typeface print. The Pentiment team has gone so far into replicating text that each stroke that appears on screen bleeds into the parchment backdrop. This effect simulates the look of ink flowing and drying on a page. Additionally, some characters will make slight errors and those get corrected in real-time during interactions. Depending on the character’s background, their dialogue bubbles reflect different styles of handwriting. Based on the limited gameplay shown, this enhanced level of detail adds to the overall aesthetic. Additionally, it demonstrates the dedication and love Obisian has for the historical setting of Pentiment.

It’s worth noting that from an accessibility standpoint, fancy fonts can be disabled for easier legibility and readability. Pentiment also supports other accessibility features. For instance, the game includes a thorough glossary that includes factoids and terms from the 16th century. Additionally, characters are included in the glossary in case you forget anyone.

The Pentiment team is driven by its passion for the history and art of the 16th century. Sawyer graduated with a history degree and it seems clear that his team shares a similar love of the setting. Pentiment’s “book pages” are inspired by late Medieval illumination and early modern woodcuts. Obsidian Entertainment pulls from examples such as the Guild of Saint Luke and the team looked at art from the era. Obsidian Entertainment used works of art to pull character designs, furnishings, clothes, and how to interact in a 2D plane. 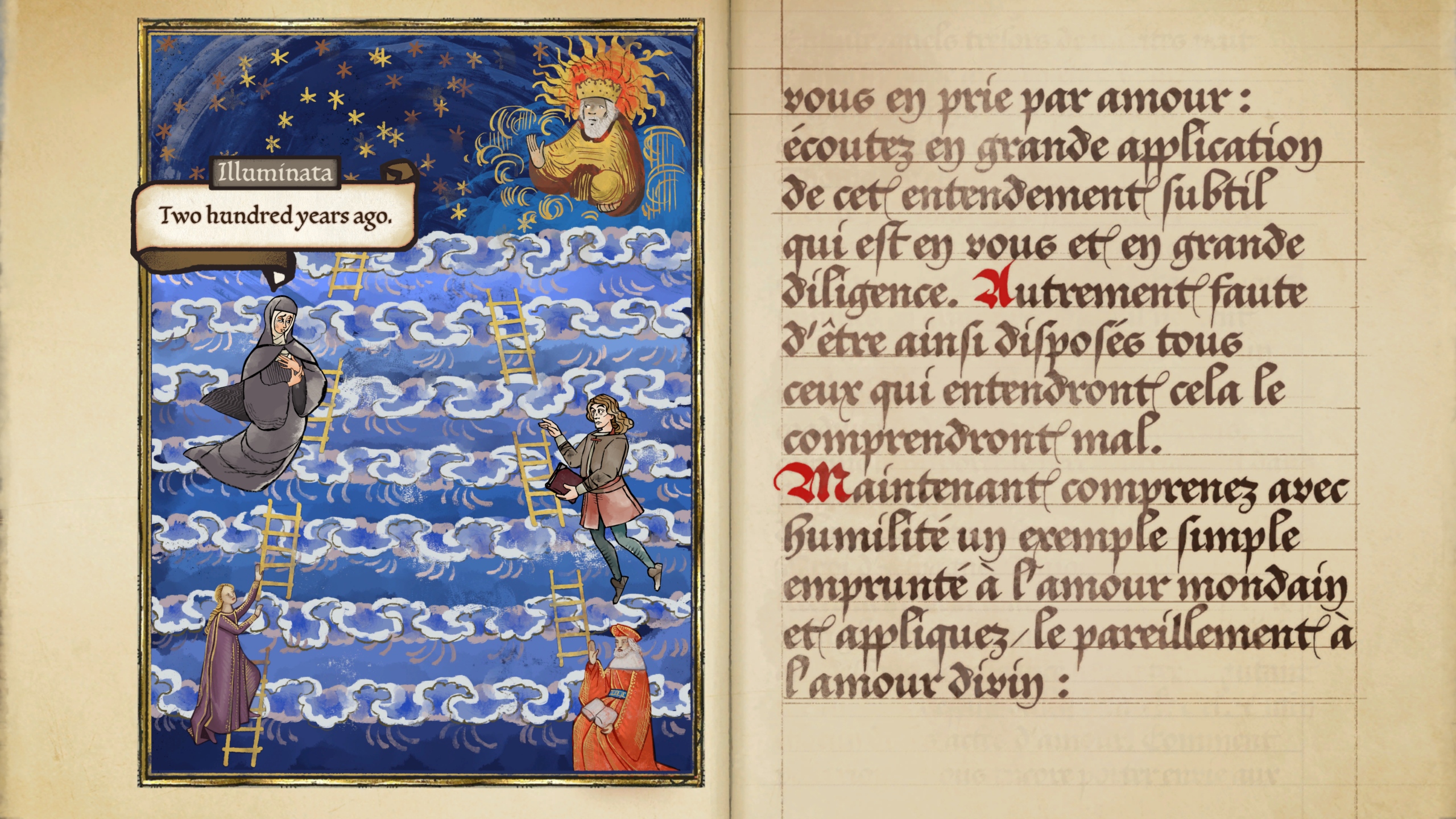 “The Nuremberg Chronicle was a really influential piece, both in identifying how woodblock mark making looked different that we could pull from to reflect in the way that our characters are designed,” Kennedy told us.

Pentiment is a game that Sawyer believes “people who are super into history can get a lot out of, but [they] don’t need to be a history expert to play it.” To maintain a certain amount of accuracy, Obsidian Entertainment worked with a number of researchers including Dr. Christopher De Hamel, Dr. Edmund Kern, and Dr. Winston E. Black. The team also partnered with Alkemie Music, an ensemble musician group focusing on Renaissance music with a modern twist on historical pieces.

Much of what’s gone into Pentiment is brand new for the studio. Thus, there have been challenges to overcome throughout development. “I think that there are some advantages and disadvantages to making something so different,” Sawyer explains. “We are doing a lot of things with animation that is not like what our animators normally have to do. So, we’ve had our animators really flexing muscles they haven’t had to flex in a long time to do a 2D game in this style. I think that having a small team that works within a larger company, which works with a much larger umbrella studio, has been beneficial for us.” 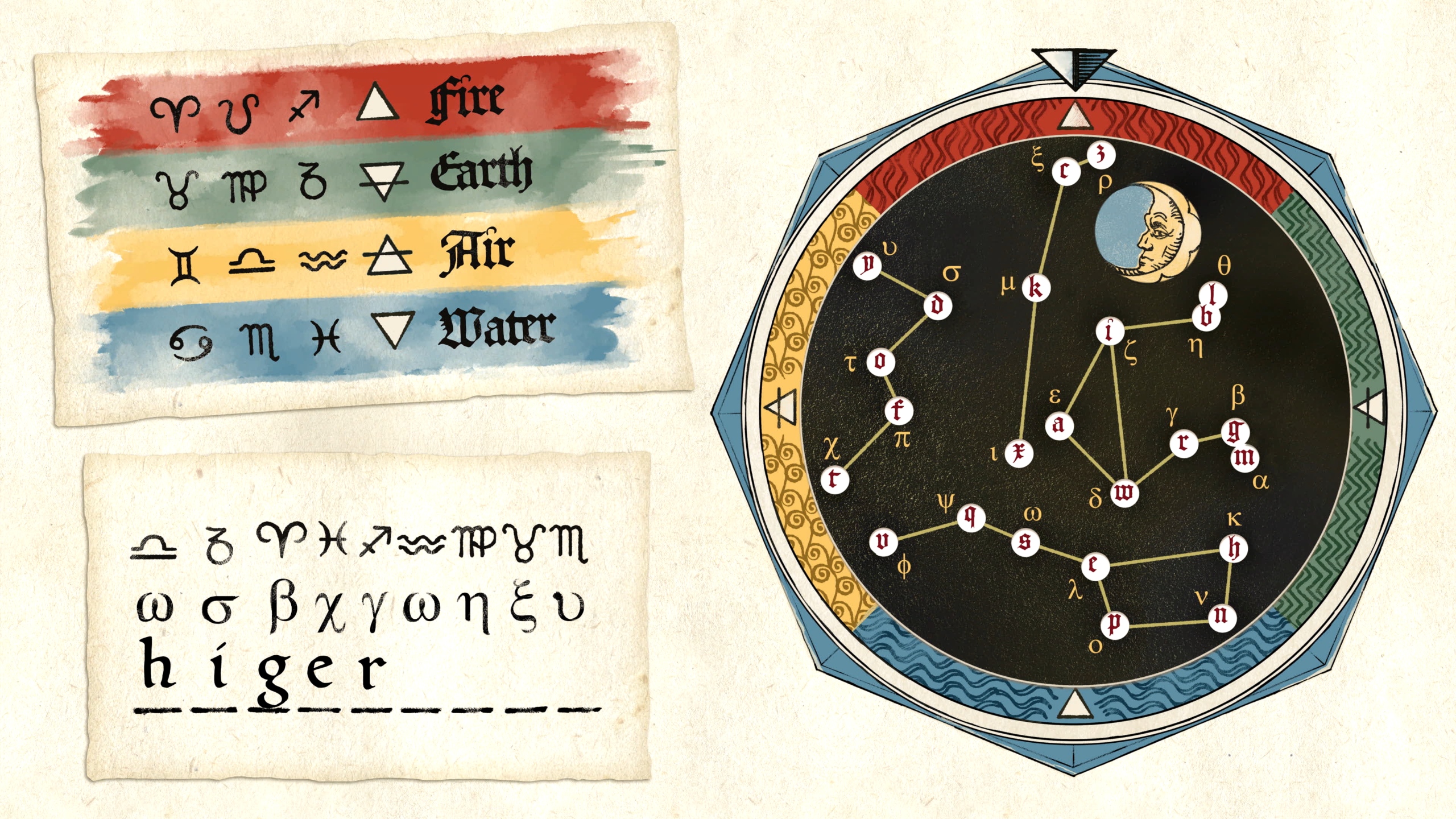 The team also notes how Microsoft has been supportive of the game throughout. Obsidian Entertainment’s acquisition enabled the team to really delve into the development of Pentiment. Also, having the game land on Xbox Game Pass sounds like it provided a huge boost in confidence in the game. “I think [the acquisition] is really what made it possible,” says Sawyer.

Pentiment will be available on Xbox One, Xbox Series X/S, and PC on November 15th, 2022.