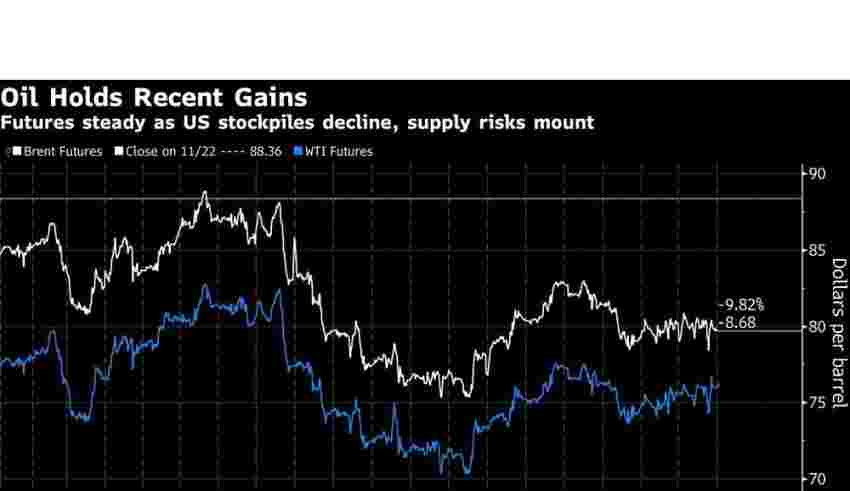 (Bloomberg) — Oil held a two-day gain as a report showing a drop in US stockpiles and threats to supply countered concerns about a slowdown.

West Texas Intermediate for February delivery traded above $76 a barrel after rising more than 2% in the week’s first two sessions amid declining liquidity. The American Petroleum Institute said US crude inventories shrank by 3.1 million barrels last week, according to people familiar with the data.

Russia’s seaborne oil shipments collapsed in the first week of Group-of-Seven sanctions targeting Moscow’s petroleum revenues, a potential source of alarm for governments around the world. In North America, meanwhile, TC Energy Corp. pushed back the full return of its Keystone pipeline by a week.

Crude remains on track for the first back-to-back quarterly decline since 2019 as further tightening by leading central banks risks tipping the US and European Union into recessions. Traders are also tracking the impact of China’s easing of harsh virus restrictions, and a warning from Saudi Arabia that the Organization of Petroleum Exporting Countries and its allies would remain proactive and pre-emptive in managing the global oil market.

Oil’s gain on Tuesday was aided by a drop in the dollar following a hawkish shift by the Bank of Japan. The Bloomberg Dollar Spot Index remained lower on Wednesday, making commodities priced in the US currency more attractive.