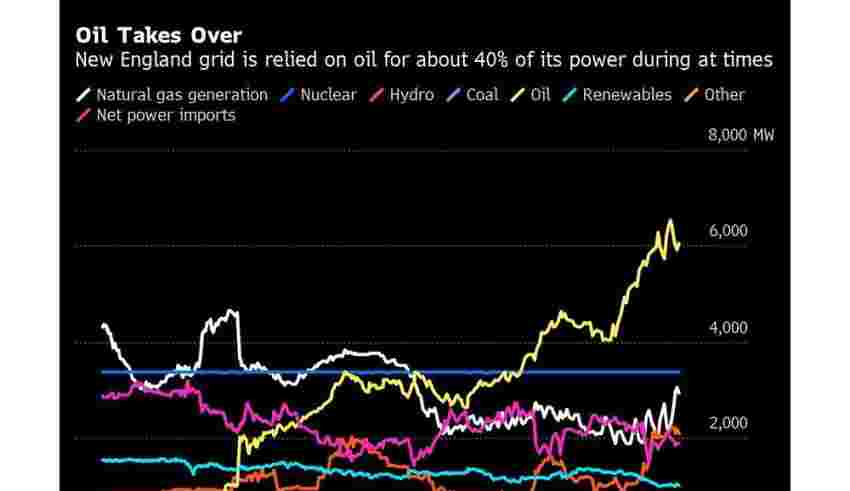 (Bloomberg) — Oil took over from natural gas as the leading fuel for power plants in New England, a significant switch that signals how the grid is desperately trying to keep the lights on in the face of a winter massive storm.

The six-state grid relied on oil for at least a third of its power generation and for as much as 40% at times on Saturday, ISO New England data show. Natural gas provided as little as 15% by mid-afternoon.

The region typically only uses oil to meet demand on the hottest and coldest days of the year as back up. Heading into the peak evening hours, New England issued a series of grid alerts warning of a possible shortfall of power reserves and asked market members to voluntarily conserve electricity.

The operator later said it’s trying to buy emergency supplies from market participants or neighboring regions. The situation is so tight that prices jumped to more than the $2,000 a megawatt-hour price cap on Saturday evening. This time last week, spot power was in the $30 range.

While New England was always likely to be operating on tight supplies this winter, the fact that oil overtook gas, nuclear and hydro — typically the cheapest and biggest sources of power on this grid — shows a level of severity perhaps expected later in the season.

The storm is already stoking up a debate about the energy transition: how to ensure there are enough power plants online to meet heating needs in extreme conditions. And when an operator resorts to a fossil fuel as dirty as oil to stave off outages, that adds another level of tension to the debate.

On the 13-state Eastern US grid operated by PJM Interconnection, gas was king but supply constraints also contributed to an unexpectedly large number of outages that prompted warnings of rotating blackouts.

Fossil fuels gained share on other grids. After the wind died down in Texas on Friday, gas accounted for 73% of power generation that night with coal making up the bulk of the rest. Coal also gained share in the Central US grid operated by the Midcontinent Independent System Operator.

—With assistance from Brian Eckhouse.