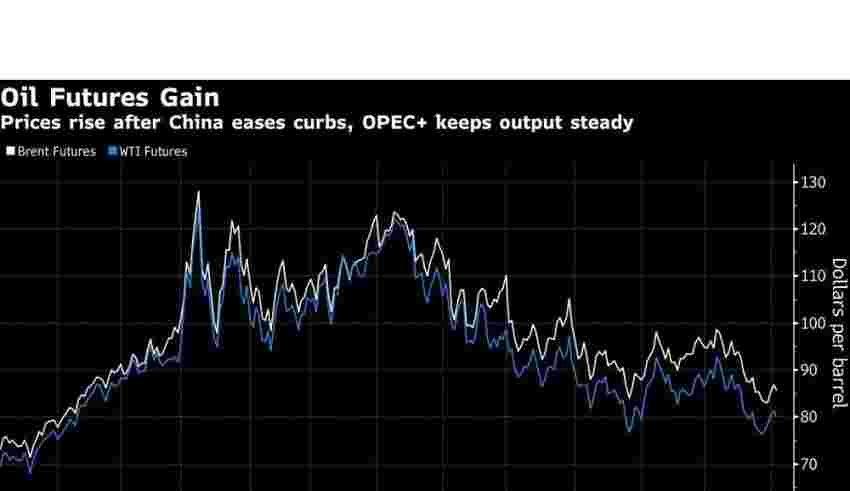 West Texas Intermediate rose above $80 a barrel after rallying almost 5% last week as Beijing loosened strict virus curbs that have stymied energy consumption. The Organization of Petroleum Exporting Countries and its allies including Russia agreed to maintain production at current levels on Sunday, pausing to take stock of the global market in a state of flux.

To further punish Moscow for the invasion of Ukraine, the European Union, in tandem with the Group of Seven, agreed to impose a cap at $60 a barrel on Russian crude, while banning most seaborne imports from Monday. The initiative is meant to penalize Russia financially, while keeping that nation’s oil flowing to other states. Russian Deputy Prime Minister Alexander Novak again rejected the cap, saying the country was willing to cut output if needed.

Oil’s gain is the latest twist in what’s been an extraordinarily volatile year for the world’s most important commodity, with markets roiled by Europe’s largest land conflict since World War II and an aggressive round of central bank tightening to fight runaway inflation. After hitting the lowest level since December early last week, US benchmark prices have since rebounded.

“It remains uncertain whether the plan will ensure the smooth flow of Russian barrels to Asian markets or if there will be a material disruption because of deliberate supply action from Moscow or risk aversion by international compliance departments,” RBC Capital Markets analysts including Helima Croft said in a note.

Oil traders have been fixated in recent weeks on China’s rapidly-shifting approach to handling Covid-19. Following a rare round of protests, authorities are moving to ease restrictions, aiding the outlook for energy demand as well as other commodities. Major cities including Shanghai, Shenzhen and Guangzhou have relaxed curbs in recent days, accelerating the shift toward reopening.

OPEC+’s agreement came after an online gathering, which replaced what was initially meant to be an in-person meeting at the group’s Vienna headquarters. The Joint Ministerial Monitoring Committee, which oversees implementation of production cuts, will meet again on Feb. 1, according to delegates. Most analysts had expected no change in supply policy at the weekend’s session.

The price-cap deal for Russian crude was months in the making as the US expressed concern that the EU’s bar on Russia’s oil and related insurance and financing services would lead to a damaging price spike. Still, the level now agreed upon is about $10 above the Russia’s key Urals grade, suggesting its impact on those flows may be limited. In Asia, however, the ceiling is below the price for ESPO crude, which is loaded from Russia’s far east.