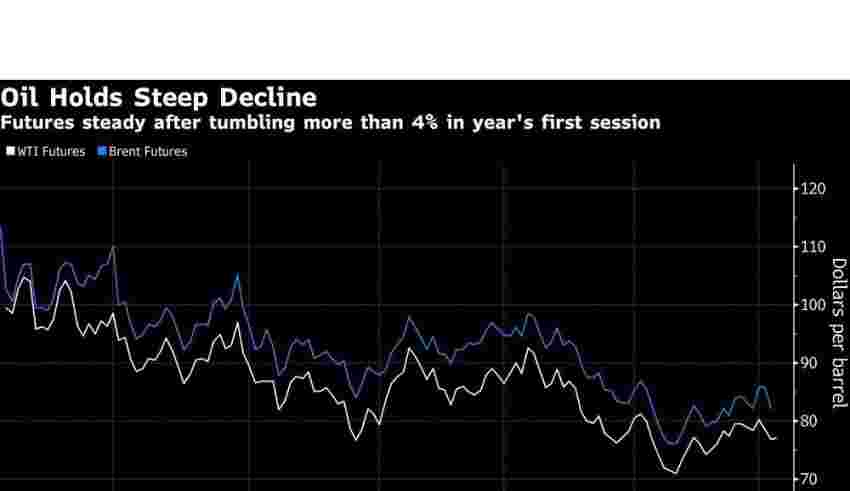 (Bloomberg) — Oil steadied after a miserable start to the trading year as a deteriorating demand outlook came to the fore, buttressed by predictions for a US recession, milder winter weather, and China’s struggles with Covid-19.

West Texas Intermediate held near $77 a barrel after sinking 4.2% on Tuesday in the biggest drop since November. A rising death toll in China from the swift easing of virus curbs is overwhelming crematoriums, and there are warnings of a heavier toll heading into the Lunar New Year. Above-average temperatures in the US and Europe, meanwhile, are easing fears of an energy crunch.

With the Federal Reserve raising rates to quell inflation, a US recession is on the cards, according to former New York Fed President William Dudley, who said it probably won’t be severe. Former Fed Chair Alan Greenspan also said a recession is the “most likely outcome” for the world’s largest economy.

Crude eked out a small gain last year as thinning liquidity exacerbated volatility. After surging in the wake of Russia’s invasion of Ukraine in February, it then lost ground as concern over a global slowdown grew. Sanctions against Moscow over the conflict have dragged its oil flows to 2022 lows, and traders are tracking further possible retaliatory actions from Russia.

“Rising Chinese Covid infections could weigh on demand in the immediate term,” said Warren Patterson, head of commodities strategy at ING Groep NV in Singapore. However, the country’s easing of virus curbs “should be constructive for the demand outlook in the medium to longer term,” he added.

Crude output from the Organization of Petroleum Exporting Countries edged higher last month as Nigeria partially reversed a long-term slump by cracking down on oil theft. The country effectively provided the entire gain, as other members stuck to production curbs.