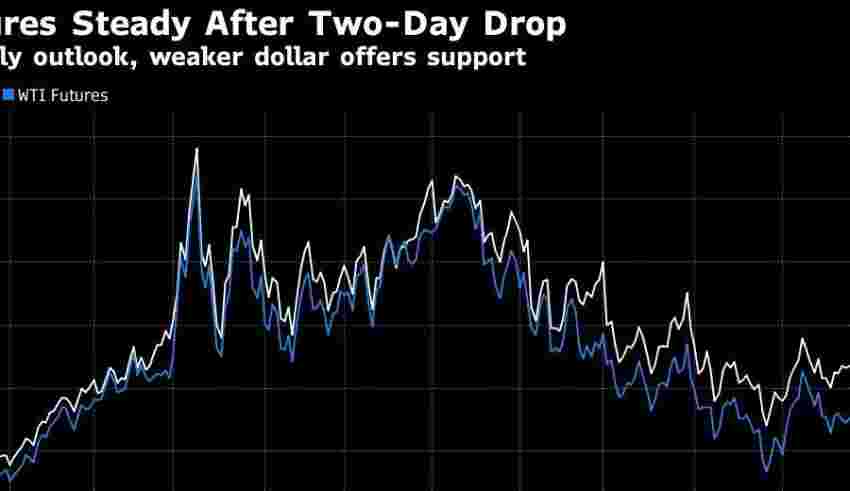 (Bloomberg) — Oil steadied after a two-day decline as support from a weaker dollar was offset by a challenged Chinese demand outlook and an industry report that pointed to rising US inventories.

West Texas Intermediate held below $89 a barrel after sliding 4% over the first two days of the week as investors fretted that China’s persistence with its Covid Zero strategy would hamstring energy demand. Still, a Bloomberg gauge of the US currency has retreated to the lowest level since September, making raw materials such as oil and copper cheaper for overseas buyers.

Crude rebounded in October after the Organization of Petroleum Exporting Countries and its allies agreed to cut supplies to counter the impact on consumption from slowing global growth. Tighter European Union curbs on Russian oil flows next month amid the war in Ukraine could also add more upward price pressure. Dated Brent — the world’s most important physical oil price — rose above $100 a barrel this week for the first time since August.

Swelling virus outbreaks in China show the strain the Covid Zero strategy is facing, with even harsh lockdowns and mass testing failing to bring them under control. In the capital, Beijing, cases have jumped to the highest in more than five months, with 78 new infections reported for Wednesday.

“A fresh surge in China’s Covid cases further sparked concerns on how soon China will part ways with its Zero Covid policy,” said Charu Chanana, market strategist at Saxo Capital Markets Pte. “While China’s virus restrictions, along with a large build in US oil inventories, are weighing on prices, there still remains structural supply concerns which are supportive instead.”

Traders were also tracking results of the US midterm elections. A change in the balance of power in the Senate and House of Representatives could derail President Joe Biden’s legislative agenda and impact the greenback, with a potential knock-on for crude and other commodities.

In the US, the industry-funded American Petroleum Institute reported oil inventories increased by 5.61 million barrels last week, according to people familiar with the figures, which also showed higher gasoline stockpiles. Official data from the Energy Information Administration follow later Wednesday.

Separately, the US has cut its forecast for 2023 oil output, the latest sign that world crude markets can’t rely on American shale fields to ramp up supply quickly enough to reduce high prices. Output next year is estimated at 12.31 million barrels a day, according to a report from the EIA released Tuesday.