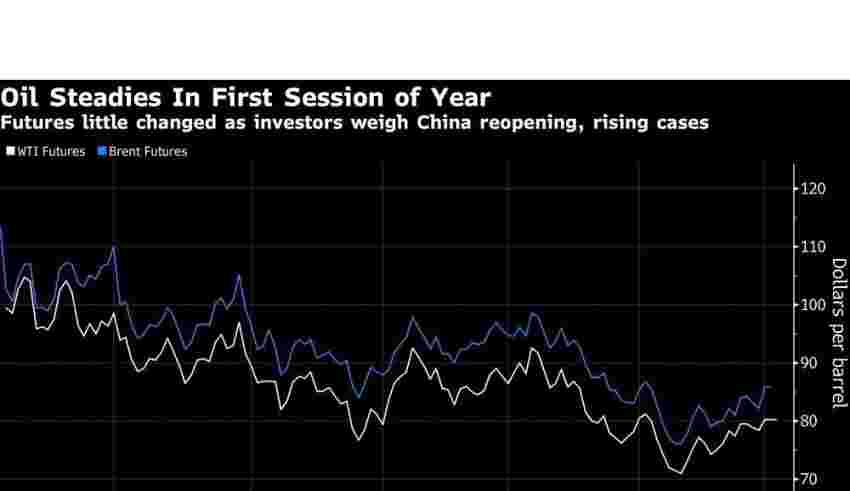 (Bloomberg) — Oil steadied in the year’s first session as challenges to near-term demand from a global slowdown were offset by the prospect that more sanctions on Russia may curb supply.

West Texas Intermediate was little changed above $80 a barrel after closing 2.4% higher on Friday to cap a modest annual advance. In China, President Xi Jinping said that tough challenges remain in the nation’s fight against Covid-19, with cases surging after anti-virus curbs were abandoned. Official data showed that the country’s economy ended the year in a major slump.

International Monetary Fund Managing Director Kristalina Georgieva warned that the global economy faces “a tough year, tougher than the year we leave behind,” according to an interview broadcast on Jan. 1. One-third of the world economy is expected to be in recession as the three big economies — the US, EU and China — are all slowing down simultaneously, she said.

Crude endured a volatile ride in 2022 after Russia’s invasion of Ukraine upended commodity trade flows, and top central banks including the Federal Reserve aggressively raised interest rates to cool rampant inflation. As 2023 gets under way, investors are tracking Russia’s reaction to sanctions on its energy exports, and the odds that the Organization of Petroleum Exporting Countries and its allies may opt to rein in production further.

WTI’s prompt spread — a widely-watched market metric — suggests ample near-term supply, with the front-month contract trading at a discount to the next in sequence. The differential was 13 cents a barrel in contango on Tuesday, compared with 7 cents in contango about a month ago.