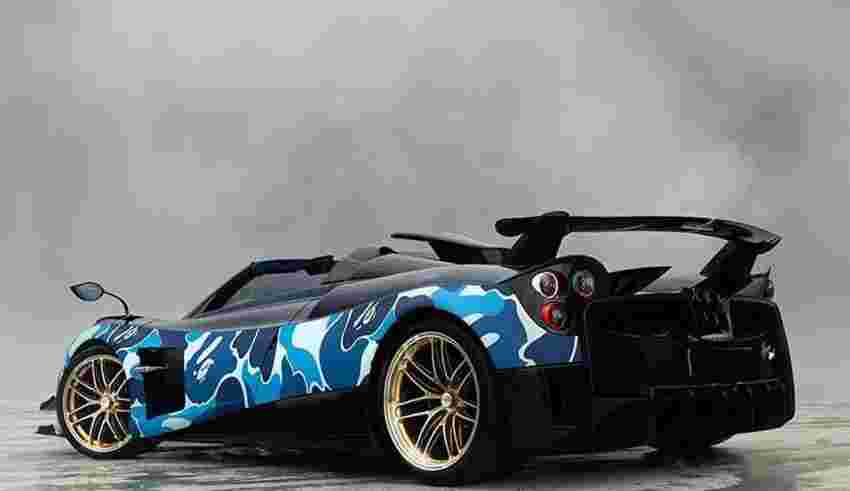 BAPE’s color palette and style have been used at the request of a client to “dress” a bespoke version of this hypercar.

As luxury streetwear brands grow and showcase their talents alongside world-renowned fashion houses, cross-pollination between other industries invites new collaborative projects that push traditional boundaries. The automotive world caught a glimpse of that back in 2019 when the hypercar specialists at Pagani Automobili teamed up with A Bathing Ape (BAPE) to celebrate Zonda’s 20th anniversary. Since breaking the internet with photos of a BAPE-inspired Pagani Zonda wrap, the dynamic duo is back to officially announce its partnership with another astonishing design. Pagani is proud to unveil the streetwear-inspired Huayra Roadster BC, featuring a BAPE ABC Camo wrap in unique shades of blue.

The one-of-a-kind Pagani Huayra BC Roadster already stands out as one of the most powerful hypercars on the planet. The creative team at A Bathing Ape chose to take things to the next level by utilizing its most iconic pattern, which flows throughout the exterior into the interior of the multimillion-dollar car. The Pagani x BAPE Huayra made its first appearance at the BAPE store in London, with the founder of Pagani Automobili, Horacio Pagani in attendance. Although the two leading brands have worked together in the past, both are happy to announce new and exciting upcoming projects to come. View all current Pagani examples for sale on duPont REGISTRY by clicking on the link below.