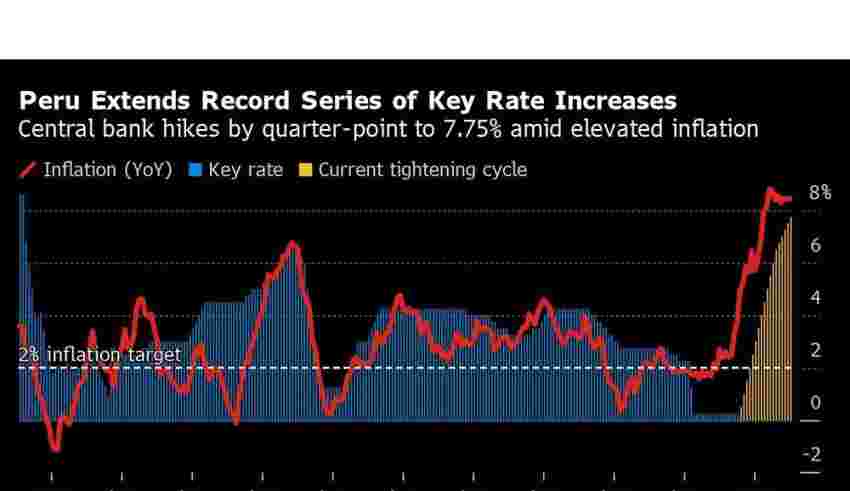 (Bloomberg) — Peru extended its biggest-ever phase of monetary tightening Thursday in a bid to curb a spike in inflation that is now being aggravated by anti-government protests and road blockades.

The central bank raised its benchmark rate by 0.25 percentage points to 7.75%, the highest level in more than two decades. The decision was in line with expectations, and was the bank’s 18th straight rate increase.

Policymakers are struggling to get the biggest inflation surge since the 1990s back under control, but their task is being complicated by the mass unrest roiling the nation. Even after slowing slightly from its June peak, annual inflation is still more than four times the midpoint of the bank’s target range.

“The forecast is for annual inflation to start to slow from March, and to return to the target range in the fourth quarter of this year,” the bank said in its policy statement.

Moderation in global food and energy prices, and falling inflation expectations, will help this trend, the bank added.

The violent turmoil of recent weeks has blocked key highways and left at least 40 dead. Demonstrators are demanding the resignation of President Dina Boluarte’s, who took office just a month ago, and for new elections to be called immediately.

Annual inflation was little changed at 8.46% in December, surprising analysts who had expected it to slow. Consumer price rises have cooled slightly from a 25-year high in June, but remain far above the central bank’s target range of 1% to 3%.

The protests have disrupted economic activity in Peru’s impoverished but copper-rich rural south, where they have been concentrated. Still, congress this week confirmed Boluarte’s cabinet, potentially reducing the instability in the short-term.

Central banks in Colombia and Mexico have also raised interest rates at recent meetings, while Brazil and Chile have halted a series of hikes.

Peru’s economy will grow 2.3% this year, according to analysts surveyed by Bloomberg, down from an estimated 2.8% in 2022.

In the meantime, the country’s currency has strengthened 1% since Boluarte took office last month after her predecessor President Pedro Castillo was impeached.

—With assistance from Rafael Gayol.