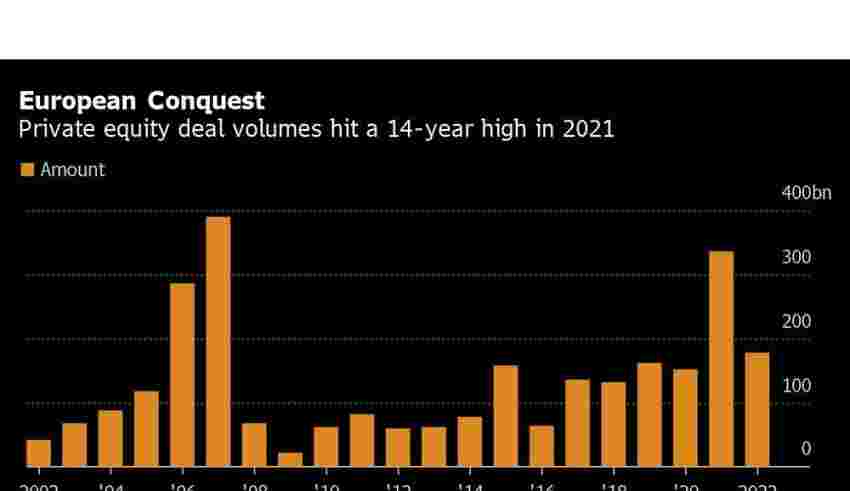 (Bloomberg) — The surge in private equity activity in Europe in recent years has loaded hundreds of companies up with debt, eroded their credit ratings, and left many of them vulnerable to bankruptcy as an economic recession approaches.

There were 762 private equity buyouts last year in Western Europe for a total of $336 billion, according to data compiled by Bloomberg, the highest since 2007. Higher borrowing costs will put pressure on firms, according to Moody’s Investors Service, especially since those backed by private-equity tend to be funded with floating-rate debt, with only partial hedging at best. Around 70% of European junk-rated companies are at risk of default, the ratings agency said.

This is a turnaround from recent years, in which accommodative monetary policy and low interest rates flooded buyout companies with capital and gave them access to cheap acquisition funding, fueling a record run of dealmaking. Activity peaked in 2020 and 2021, as central banks poured money into the global economy to cushion the impact of the Covid-19 pandemic.

Now, as the European Central Bank begins to unwind this policy to relieve decades-high inflation, investors worry that a private equity-heavy corporate sector is not equipped to deal with economic stresses.

“The highly-levered companies that compose the European high-yield market face a difficult horizon in this current context of higher rates and restricted liquidity,” said Alexandre Deneuville, a credit investor who manages $1.2 billion of assets at Carmignac Gestion.

With capital becoming more expensive and profits falling, Deneuville said that Europe may experience a much higher default rate than numbers currently suggest. “As we enter into next year, weaker companies are set to run out of runway.”

Interest from private equity doesn’t always increase risk, and can even be a boon to financial stability. When the UK’s FTSE 100 Index underperformed relative to peers following Britain’s departure from the European Union, for example, private equity interest in British companies soared, creating a natural floor for British stock markets.

Such investment can also allow companies to grow more than they might otherwise have been able to, observed Thomas Friedberger, deputy CEO at alternative asset manager Tikehau Capital. “Private equity provides partnership capital for companies,” he said, as well as “expertise and access to a network of companies in the sector.”

These perks, however, come at a price. Some private equity debt is generated through the bond market, but the majority happens via leveraged loans, which has swelled to €350 billion ($363 billion) in Europe, according to investment manager Ares. These risky loans have contributed to the uptick in European companies with a Moody’s junk-rating of B2 or lower, which the ratings agency considers vulnerable territory.

In a cautionary note about companies holding debt issued without investor protections, Moody’s analysts observed that in the event of a downturn, “most carry high financial leverage, large exposures to floating rate covenant-lite debt and are owned by private equity, increasing the likelihood of defaults.”

To be sure, private equity firms aren’t the only ones loading up companies with debt to their detriment. Gambling firm 888 Holdings Plc said its buyout of gaming peer William Hill International left the combined firm with a much greater debt structure than anticipated due to deteriorating macroeconomic conditions.

Whatever the source, companies are starting to strain under these debt loads. Gym owner David Lloyd Leisure Ltd., supermarket Asda Group Ltd. and Norwegian cruise line Hurtigruten Group AS. — all owned by private equity giant TDR Capital — have seen their bonds trade at or near distressed levels in recent weeks.

In the last year, British grocer WM Morrisons Supermarkets Ltd saw its Moody’s credit rating drop from Baa2 — comfortably investment grade — all the way down to B1, one notch above what the agency deems unsafe, after CD&R’s leveraged buyout. Given the company’s high-net leverage ratios, Moody’s has warned that further cuts may be in the offing.

With energy prices spiking in response to Vladimir Putin’s invasion of Ukraine and European countries facing gas shortages as they transition away from Russian supplies, pressure is mounting. Corporate costs have already risen sharply, and companies in consumer-facing, packaging, and industrial sectors have been particularly hard hit.

At the same time, rising inflation and a cost of living crisis are also having a notable impact on consumer demand: at the end of November, a European consumer confidence index was at -25.8, hovering slightly above September’s record low of -29.3.

Investors predict that things will get worse before they get better.

“Next year, credit quality is going to deteriorate significantly, most of these companies are going to get hurt by demand and higher costs,” said Nicolas Jullien, a high-yield portfolio manager at Belgian fund manager Candriam.  “My real concern is if rates stay where they are today, if inflation is more permanent, many companies will then have to restructure.”