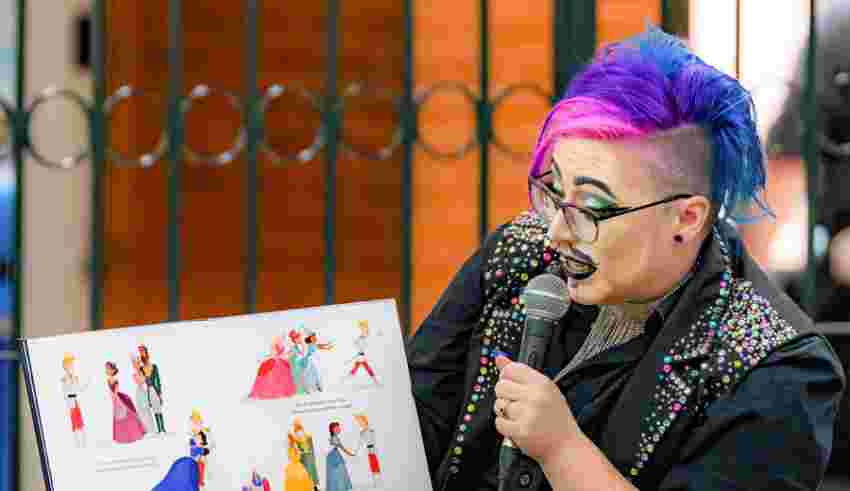 PORTSMOUTH, OH – Let me attest to the following upfront: Drag queens (DQ) that entertain adults (no children present) in adult places and spaces would not be affected by legislation. Furthermore, these bills are not about the rights of LGBTQ citizens – whether a drag queen is heterosexual, gay, or transgender is not the issue at all – the issue is the sexual exploitation of children.

DQ’s are hip-hopping mad over politicians and parents standing up to protect kids from sexual exploitation. Why can’t adult men in salacious and skimpy attire understand the sexual abuse allegations of children stuffing dollars in G-strings, thongs, and fancy panties as DQ’s provocatively twerk and jerk to music?

DQ’s absolutely do understand – the response is to play the confused victim by spouting scripted rhetoric. Being organized and trained on propaganda, groomers and pedophiles know how to push back. But it’s not working as parents, politicians, and others push back against the simulating of sex acts in front of children – a form of sexual abuse.

It’s not about homophobia, transphobia, hate and misinformation as the DQ soldiers accuse their opponents in order to upset the LBGTQ community by resorting to falsehood. Moreover, children don’t need to engage with DQ’s for ‘artistic expression’ as there are myriad opportunities for creativity without being hypersexualized by grown men pretending to be women. Children would much rather play and experience fun with other children – just ask a child development expert.

Gays Against Groomers. “We are a coalition of gays against the sexualization, indoctrination and medicalization of children.”

As a former credentialed child therapist, I’ve provided counseling services for child victims of sexual abuse. I know what sexual abuse is – I know what the law says about child sexual abuse – And simulating sex acts in front of children while they touch an adult’s body with dollar bills is a form of sexual abuse. Exposing bare bums with bulges covered only by a piece of fabric for sexual arousal by an adult is sexual child abuse.

For example, at an event in Dallas, Texas, drag queens accepted cash tips from young children while engaging in sexually suggestive body movements in front of a neon sign that read, “IT’S NOT GONNA LICK ITSELF.”

Sara Gonzales, host of The News and Why It Matters at BlazeTV, attended the DQ event in Plano, Texas, and told “Tucker Carlson Tonight” that the drag show was part of a growing disturbing trend she called “sexual abuse of children.”

My questions: How can any sober and sensible adult believe the above activity is appropriate for children? What motivates a man to do this type of behavior in front of a child? Why would any adult herald the sexualization of kids? Why don’t we see scantily dressed females pretending to be males while calling themselves drag kings with twerking in front of kids?

The following is quoted from the Centers for Disease Control and Prevention (CDC) website:

“Child sexual abuse refers to the involvement of a child (person less than 18 years old) in sexual activity that violates the laws or social taboos of society and that he/she: does not fully comprehend, does not consent to or is unable to give informed consent to, or is not developmentally prepared for and cannot give consent to.”

“Child sexual abuse is defined as an adult or older child’s sexual contact with a child, which may or may not involve physical contact.”

“Child sexual abuse includes a wide range of sexual behaviors that take place between a child and an older person. These behaviors are meant to arouse the older person in a sexual way. In general, no thought is given to what effect the behavior may have on the child. For the most part, the abuser does not care about the reactions or choices of the child.”

“From a behavioral standpoint, child sexual abuse is often preceded and accompanied by “grooming.” The abuser will try to gain the confidence and affection of the child through special attention and gift-giving, with gradual escalation to sexual activity. This mixture of affectionate and abusive behavior can be confusing for the child. It can also make it difficult for the child’s family to recognize abuse, since they typically see only the affectionate behavior.”

Tennessee Senate Majority Leader Jack Johnson, a Republican, has introduced legislation to prohibit drag entertainers from performing on public property or at private functions where their performance may be viewed by a minor, according to a recent article in The Hill.

“I don’t want to ban a theater company from doing a production of Mrs. Doubtfire in a public park,” Johnson said. “Most people have seen that movie where Robin Williams was dressing up as a woman. We don’t have an issue with that. We do have an issue with men dressed as women simulating sex acts in public parks in front of kids.”

In TN, first-time offenders would be guilty of a Class A misdemeanor, punishable by jail time of up to a year and a fine of $2,500. Repeat offenders would be charged with a Class E felony, which carries a prison sentence of up to six years and fines totaling up to $3,000.

Matt Walsh explains the “anti-grooming” bill in Tennessee on his podcast at YouTube.

A bill that would ban drag performances in all public venues will be introduced in the Idaho Legislature in January, Idaho Family Policy Center President Blaine Conzatti told the Idaho Capital Sun. “No child should ever be exposed to sexual exhibitions like drag shows in public places, whether that’s at a public library or a public park,” he said.

The drag queen performance of a 9-year-old boy at a bar in Fairfield County prompted a state legislator to propose a law aimed at closing what he says is a “loophole in child exploitation laws.” Legislation (House Bill 180) proposed by Rep. Timothy Schaffer in 2019 would update child endangering laws to prevent performances by children that simulate sexual activity and appeal to “the prurient interest,” as reported by Fox 8.

“Stop the Sexualization of Children Act”

More than 30 House Republicans signed a measure to prohibit federal funds from being used for programs or events for children younger than 10 that contain “sexually-oriented material,” which the bill defines as “any topic involving gender identity, gender dysphoria, transgenderism, sexual orientation, or related subjects.”

What can you do? Contact state representatives for legislation in your area. Parents, politicians, childcare educators, medical professionals, social workers, mental health professionals, and others need to unite to protect children from indoctrination, grooming, sexualization, and sexual abuse by adult males drag queens dressed like women.