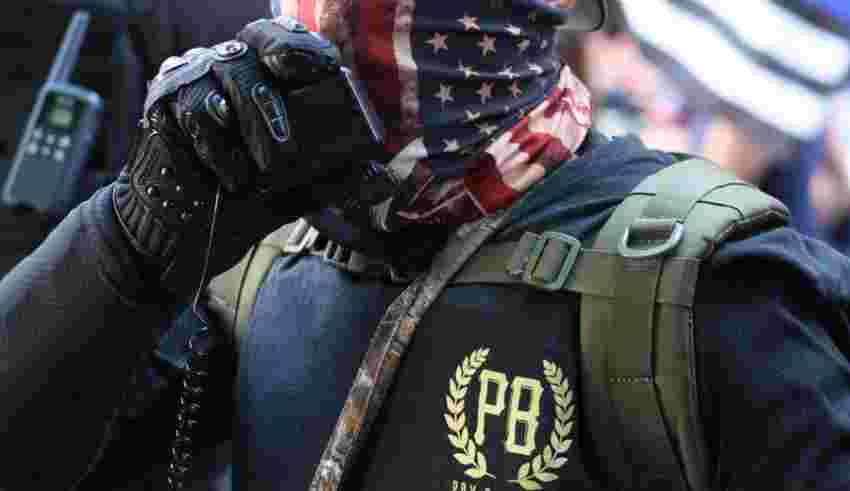 PORTSMOUTH, OH – Adult drag queens can entertain each other ‘til the cows come home. That’s their own adult business. But when children are invited to attend or participate in adult entertainment – that’s the business of all sane and sensible adults. And any adult that disagrees has a hidden agenda; is a clueless moron; or is a woke weirdo. Furthermore, that includes parents and guardians.

Why would an adult encourage, support, or promote an innocent child being exposed to a costumed man simulating sexual acts on a stage? Children do not belong in bars, strip clubs, or at adult entertainment venues. Why in the world is this concept so difficult to comprehend?

Who will stand up and speak out to defend and protect the children against perverts, predators, and pedophiles in Florida?

Enter the Proud Boys of North Florida.“ A Fraternal Brotherhood Of North Florida Men. We Are Dedicated To The Greatest Nation That Has Ever Existed, And To Each Other. We are stand-alone autonomous local club. The Proud Boy chapters associated with this website start and end in North Florida.”

On February 3, 2021, the Proud Boys in North Florida formally seceded from the national political and organizational structure of the fraternity, restoring the original autonomy that existed before 2018. We were among the first across the planet to do so.

On September, 2021, after evidence became overwhelming that the Proud Boys national governing structure had been hijacked by federal informants, grifters, and other nefarious elements, the fraternity officially abolished all national governance. All authority and responsibility now exists only at the local level.

So, the Proud Boys of North Florida (aka Bold City Proud Boys) are no longer associated with the national movement. They are concentrating on Northern Florida.

The Florida Standard penned a recent article on the Proud Boys. “The Proud Boys are frequently labeled as a far-right extremist group by legacy media outlets. The Anti-Defamation League (ADL) describes them as “violent, nationalistic, Islamophobic, transphobic and misogynistic.” Proud Boys founder Gavin McInnes has called the group a “pro-western fraternity” and even sued the Southern Poverty Law Center (SPLC) for defamation after the SPLC labeled the Proud Boys a hate group.”

The local Proud Boys posted a rebuttal on their website to a First Coast News (FCN) [Hate group threatens holiday drag show in Jacksonville] article referring to them as a hate group.

The FCN noted, “The messages call on organizers to change the event from open to all ages to 18+, or they’ll have members from across the country arrive to protest.” However, Tepeyolot Cerveceria (Tepey’s) in East San Marco refused.

The Proud Boys aren’t trying to shut down or stop drag queen entertainment, but instead call for a restriction on ages – in other words, no children allowed.

My question: Why would any business venue give drag queens (aka heterosexual, homosexual, bisexual, transsexual men in thongs and pasties) access to children for adult entertainment?

Proud Boys wrote: “On that note, nice headline First Coast News. The editor and the author need to be fired. A quick public records search could have landed FCN a meaty story about a pack of druggies and criminals using this PC trash to get access to kids in order to abuse them…A journalist should have ethics and report the truth. You just ran interference for child abusers and molesters…  The men you demonized are actually just local businessmen and patriots who would rather be having a cold one but our sense of duty will not allow us to sit on the couch when society fails to protect kids at every level… To be smeared by journalists too lazy to run a 1 minute check to see who wants to dress little boys like girls and do sexual themed shows…complete with bottomless drink specials on a Sunday morning ….that is our great honor.”

“This action on Sunday is not a virtue signal against some random drag queen show for kicks, or because we are homophobes. We have found a core of dangerous criminals preying on local children. Across the globe at these child friendly drag events, there is always a core of dangerous criminals lurking just below the surface, and Jacksonville is no exception. Before we go any further, we want to commend our local LGBT community. There is a very significant portion of them joining us in questioning the motives of the organizers and asking why he does not just leave the kids out of it…Seeing an LGBT community that gets it, and proactively tries to police itself, makes us Proud Of Our Queers.”

So, the Proud Boys of North Florida thank members of the LGBT community for speaking out to protect children from predators.

Proud Boys of North Florida ask for help from community:

“We cannot be everywhere all the time. We are calling on local churches, child advocates, charities, and all men of faith and honor in the community to stand up for our youth. We need ordinances and laws banning sex themed shows for minors. They are so brazen now it is in the open, and they will push back against an outraged community. The arrogance is scary. First they want the right to their body, OK we can accept that. Next the right to murder the unborn inside of their body. Now they are asserting a right to sexually use the bodies of children…”

Folks, I support peaceful groups that defend and protect children from drag queen child predators. From where I sit, the Proud Boys of North Florida genuinely care about kids.