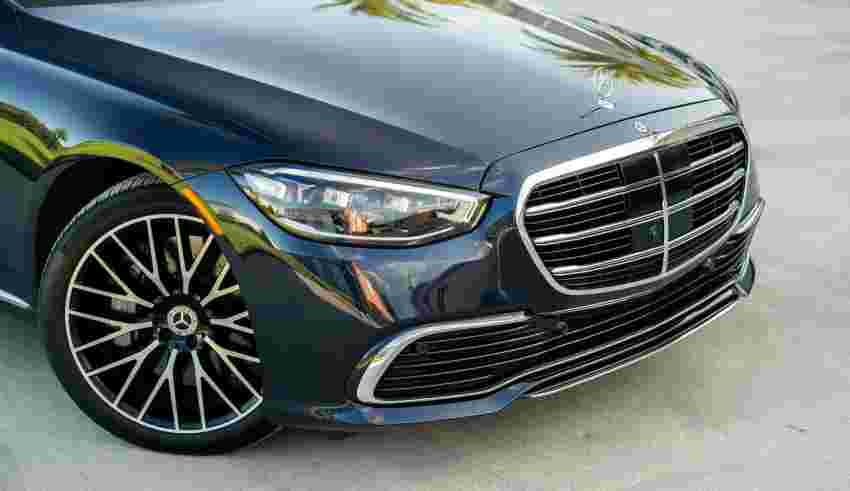 Since its introduction in the 1970s, the Mercedes-Benz S-Class has made a name for itself through its innovations. By debuting now-common features like stability control and adaptive cruise control, this plush sedan often gave us a glimpse of what the rest of the auto industry would implement over the coming decade.

The 2022 Mercedes-Benz S580 4MATIC is no exception. However, this seventh-generation model doesn’t just use tech to impress its driver. It implements it to create a segment-defining driving experience. While the luxury car market has exploded over the last decade with options that cost deep into the six figures, the S-Class’ elegance, comfort, and clever interior design now make it a top pick that offers tremendous value.

Although streamlined for the modern era, the 2022 Mercedes-Benz S580 counts on elegant proportions that pay tribute to its 1950s ancestors. Its long hood and tall grille with vertical slats pay homage to its roots, while its sleek headlights, retractable door handles, and sloping roofline embraces modern styling. Thanks to its 203.9-in length and 76.9-in width, it’s also a sizable sedan whose footprint translates to substantial road presence.

2023 Rolls-Royce Phantom Review: A Step Above The Rest

The seventh-generation W223 just looks expensive. My tester featured a Nautical Blue exterior finish with a complementing Macchiato Beige interior. With a restrained use of chrome trim and sleek lines that seamlessly transition from the car’s front, side, and rear, the S580 comes across as more stylish and elegant than gaudy and flashy. It’s a one-percenter car that doesn’t need to yell its price tag to be heard.

It’s worth pointing out that the current-gen S-Class looks as good as it does because an internal combustion engine powers it. Take its electric counterpart, the EQS, as an example. It may represent the future with its new proportions and aero-focused design, but it loses the subtle elegance that the S-Class exudes.

Unlike previous S-Class generations, the W223 offers up a surprising dual personality. Driving through Miami, FL’s straight, monotonous roads, the S580 and its plush air suspension easily made road imperfections disappear without delivering a floaty experience. However, on the odd corner, it proved surprisingly athletic. Its dampers are stiff enough to remain planted in the bends.

The S580 counts on the german carmaker’s well-known twin-turbocharged 4.0-liter V8, delivering 496 hp and 516 lb-ft of torque. Thanks to a quick-shifting nine-speed automatic transmission and standard all-wheel-drive system, the S-Class rips off the line, despite its nearly 4,800-lb curb weight suggesting that it might not. With peak torque coming in at 2,000 rpm and little turbo lag, the S580 remains agile even while already at speed.

While its straight-line performance is impressive, how well its powertrain fades into the background makes the driving experience. While puttering around town, its nine-speed box shifts nearly imperceptively while its engine delivers its power without intruding into the cabin with unwanted noise. Thanks to its integrated starter generator and 48-volt electrical system, the S580’s start-stop works seamlessly in the background without unwanted vibrations and jerkiness when setting off.

Its steering is incredibly light and disconnected in Comfort mode. However, it weighs considerably in Sport mode, sometimes a bit too much considering the luxury ethos of the S-Class. The same goes for its suspension. While in Sport and Sport+ mode, the S580 stiffens considerably, significantly reducing its ride quality. With Comfort mode already having plenty of composure, it makes its more aggressive modes superfluous.

If there’s anything somewhat lacking in the S580 driving experience, it’s its braking system. Although plenty strong to slow down this heavy sizable sedan, you’ll need to press the pedal considerably to get the desired performance. However, once you pass a certain point, you get all more stopping power than you bargained for, making stop-and-go traffic a delicate dance.

Inside is where the 2022 Mercedes-Benz S-Class punches way above its class most. From its stitching, finishing, and material choices, it feels like a car that costs way more than the S580’s as-tested $140,930 base price. It starts in the tech department, where a highly-configurable 12.3-inch 3D instrument cluster sits in front of the driver and displays a customizable suite of gauges.

A squared-off 12.8-inch touchscreen with both Apple CarPlay and Android Auto connectivity seamlessly blends the dashboard and center console. While Mercedes-Benz, unfortunately, traded off most of its buttons and switches for this sizable display, all of the AC controls and infotainment functions live precisely where you’d expect them to. Given the height and orientation of the screen, it lives close to where your arm naturally rests, making quick changes a breeze.

The S-Class’ front seats deserve a deep dive of their own. They offer a whole suite of options with 19 small motors, heating, and cooling functionality. From hot massages to its Energizing settings that help benefit circulation on longer drives, these could be one of the most comfortable seats in the industry. The same goes for the rears, which offered those aforementioned features but have the added benefit of reclining with the optional Chauffeur Package as part of the Executive Line.

As far as internal combustion luxury cars go, the S580 is among the quietest. Thanks to great sound deadening, a quiet powertrain, and a powerful Burmester sound system, it’s easy to drown out the outside world. The only way the S-Class can improve is by replacing its engine with electric motors.

As you look around while getting a hot massage, it dawns on you that the S580 offers, at $140,00, the same or better features than cars that cost twice as much.

The 2022 Mercedes-Benz feels like a product that has been refined through multiple decades. From its elegant styling that pays homage to its history to its quiet but powerful engine and world-class interior, the S580 is a segment-defining product.

Like its predecessors, the seventh-gen S-Class counts on plenty of tech in its powertrain and interior. But instead of purposing these to show us the future, the S580 focuses on delivering the best driving experience possible. With its price tag that undercuts many of the luxury segment’s priciest options, this plush sedan offers value without cutting any corners.