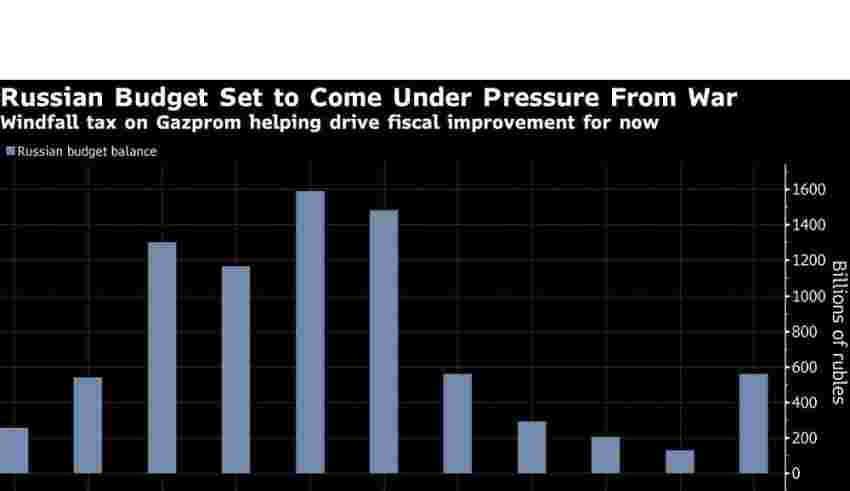 (Bloomberg) — President Vladimir Putin said Russia has “no limitations” on military spending for the war in Ukraine, as he urged the army to deliver on his declared goals with the invasion approaching its 11th month.

“The country and government is giving everything that the army asks for — everything,” Putin told top military officials at the Defense Ministry’s annual meeting in Moscow on Wednesday. “I trust that there will be an appropriate response and the results will be achieved.”

Russia should expand its armed forces to 1.5 million troops from the current 1.15 million to ensure its security, Defense Minister Sergei Shoigu told Putin. The total should include 695,000 professional contract soldiers, he said, without explaining where the additional recruits would be found.

The commitment to spare no expense on the war will be a strain on government finances as the proceeds from energy exports come under pressure from price restrictions imposed by the US and its allies. While Russia is running a record current-account surplus this year, the flow of money is expected to weaken in 2023 as sales of gas to Europe plunge and Group of Seven sanctions curb Russia’s oil revenue.

The budget is expected to run a deficit of 2% of gross domestic product by the end of this year, despite recording a wider surplus in recent months thanks largely to dividends and a windfall tax paid by Gazprom PJSC.

The Kremlin leader addressed his military chiefs as Ukrainian President Volodymyr Zelenskiy prepared to meet US counterpart Joe Biden in Washington on his first trip outside Ukraine since Russia’s Feb. 24 invasion began. Biden will unveil almost $2 billion more in assistance and announce moves to deliver a Patriot missile battery to help Ukraine build up its air defenses against a campaign of Russian strikes aimed at knocking out heat, power and water supplies during the winter.

In a largely low-key address devoid of forecasts of imminent success, Putin sought to deflect blame for what he called the “shared tragedy” of the war that he began, repeating claims that the conflict was unavoidable even as Ukraine and its US and European allies had repeatedly made clear before the invasion that there was no threat to Russia’s security.

Putin spoke a day after he conceded in a message to Russia’s spy agencies that the situation in four partly-occupied regions of southeastern Ukraine was “extremely difficult.” A successful Ukrainian counteroffensive is wresting back control of an increasing amount of the territory including the city of Kherson, the only regional capital Russia seized during the war.

He said Russia needed more drones to support military operations. US intelligence alleges Russia has turned to Iran for supplies of drones and is seeking munitions from North Korea to cover equipment shortages, something the Kremlin denies.

After abandoning earlier efforts to seize Kyiv and topple Zelenskiy, Putin has focused on the southeast of Ukraine, including on securing a land bridge from Russia to the Crimea peninsula he annexed in 2014. Bolstered by billions of dollars in US and European military supplies and financial aid, Ukrainian authorities have sounded increasingly confident that they can defeat Russia’s invasion and regain all of the territories taken in the war.

Even as he promised a blank check for spending to achieve victory, Putin insisted Russia won’t emulate the Soviet Union’s experience of militarizing its society and economy to service the army.

“We will not repeat the mistakes of the past, when in the interests of increasing defense capability where necessary and where it was not really necessary in fact, we destroyed our economy,” he said. “We simply don’t need this.”