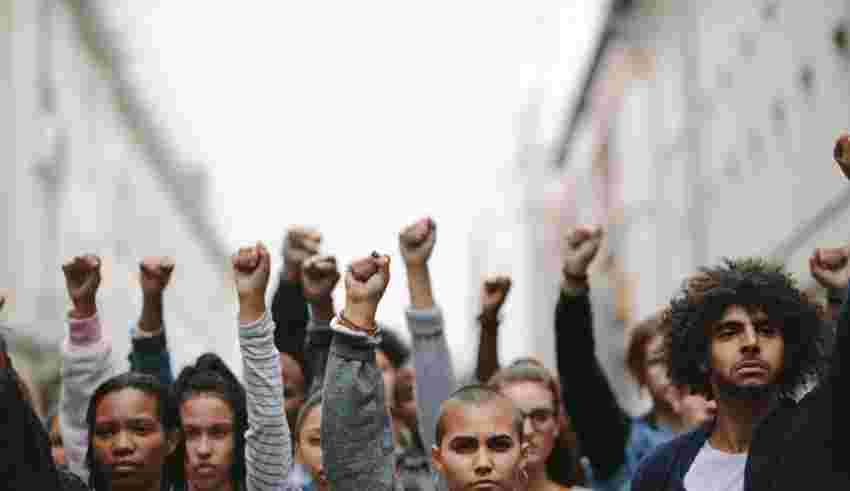 “The goal of socialism is communism.” –Vladimir Lenin

PORTSMOUTH, OH –  From the get-go of this column, let me applaud alternative media for standing up and speaking out for freedom. Unending deep-felt gratitude for the personal and political patriots in our great land of liberty for their courageous words and deeds before, during and after – the coronavirus crisis, the erosion of the education, the stolen election of 2020, the corrupt BLM movement, gun control legislation, the open border fiasco, the gender ideology debacle, the climate change hoax, and all the other distractions used by the Deep State regime to destroy the U.S. Republic and our Constitution.

But folks, the issue underneath the issue is a socialist, fascist, communist, Marxist agenda. And that’s what freedom-loving citizens and the alternative press need to continue to focus on and hammer home.

In reality, the radical Lefty liberals wanted socialist Bernie Sanders as leader, but trained in tyrannical tactics they chose Joe Biden instead. In-your-face fascism would have alarmed the citizens – and the oligarchs knew it.

In 2021, Florida Republican Senator Rick Scott penned an opinion piece for Newsweek about the slippery slope of socialism. “Over his first 100 days, Joe Biden embarked on a mission to fundamentally change America…Unfortunately for the American people, Biden’s “new New Deal” is taking our country down a path all too familiar to those who study history. While Democrats talk incessantly about supposed “systemic racism” lurking around every corner, the real enemy we face is the systemic socialism that Joe Biden and his Democratic allies on Capitol Hill and in state capitols around the country are foisting upon us.”

The Biden regime initiated one smoke screen after another to cover their totalitarian agenda. And the traitors instigated chaos and calamity in the economy with inflation and beyond inflation via the Federal Reserve cabal. What do you think a digital dollar and a one-world currency is all about?

Scott continues, “Joe Biden has proposed more than $6 trillion in new spending this year alone, funded by trillions of dollars in new taxes and trillions added to the national debt. It’s redistribution of wealth, pure and simple. His plan is to create a system in which some Americans are forced to surrender half of their income to the government, where taxes are levied not simply on income, but also on investments, transactions, capital gains and of course death.”

Scott hit the socialist nail squarely on its fascist head. Remember what projection is – whatever the radical rats accuse the Republicans of doing – is exactly what they are doing.

“Joe Biden and the Democrats are also attacking the First and Second Amendment rights of Americans. Socialists worldwide always cancel free speech and take away guns from their citizens. They’re working with woke CEOs, Hollywood, Silicon Valley and academia to tell us what we can say and even believe. They see themselves as the new arbiters of truth. No longer is the family, the church or the community at the center of our culture. Democrats and their allies are creating a new town square where they know what’s best, and there’s no room for the values that made America the world’s greatest superpower and the envy of all nations.”

The mainstream media mafia attack Freedom of the Press, while the autocrats in the Oval Office attack Freedom of Speech. A civil war without militia or bullets is being fought in the USA with the end goal being a nation of socialism and beyond.

At the end of his commentary, Scott proclaims, “Make no mistake; if we allow Democrats to take us down this path, the American people will suffer, just as people have in every socialist experiment. We have to fight Joe Biden’s systemic socialism with everything we’ve got.”

I agree with Senator Scott.

Fox News lists several articles about the dangers of socialism and the regime of the Democrats.

In a 2020 article for The Federalist, Helen Raleigh asserts “Rather than repeating always failed socialist experiments, Americans ought to remember the powerful lessons early settlers learned in the 1620s: Socialism is incompatible with free people. It always leads to failure and misery. The United States of America must never become a socialist country.”

In a 2019 article for The Federalist, Alexander Zubatov purports “The newfound openness of large numbers of Americans to socialism is, by now, a well-documented phenomenon. According to a Gallup poll from earlier this year, 43 percent of Americans now believe that some form of socialism would be good thing, in contrast to 51 percent who are still against it. A Harris poll found that four in 10 Americans prefer socialism to capitalism.”

The New American explained socialism in several articles (Vol. 35, No. 17 – 2019). “There are different flavors of socialism, to be sure; communism, Marxism, and progressivism are all socialist movements…But all of them share one cardinal feature: the belief that the role of government is to plan, manage, control, and regulate all aspects of human activity, since personal liberty cannot be trusted to promote social order and equality. This, the central thesis of modern socialism, has come to replace in many people’s minds the belief in the power and superiority of liberty that most Americans used to embrace. Put otherwise: If you believe that individual liberty is a nice idea in theory but won’t work in practice, you’re sympathetic to socialism,” notes Charles Scaliger as he further explains the misconceptions of socialism.

“Many Americans, especially young people, want to get rid of capitalism — because of its inequality — and install socialism as a replacement. But such a plan has been tried all over the world, with disastrous results,” declares Dennis Behreandt as he further explains the deadly history of socialism.

“Socialism’s dirty secret: It’s not a share-the-wealth scheme, and it’s not enacted for your benefit. It’s a control-your-wealth and control-you scam,” asserts William F. Jasper.

In a 2019 opinion piece in The Published Reporter, Chuck Lehman explains, “Before we can begin the discussion, let’s define the terms. Capitalism is an economic system in which investment in and ownership of the means of production, distribution and exchange of wealth is made and maintained chiefly by private individuals and corporations. Socialism is a theory or system of social organization in which the means of production and distribution of goods are owned and/or controlled collectively or by the government. In a simplified nutshell, capitalists want less government ownership, and socialists want more government ownership.”

A 2018 commentary in The Western Journal asks, “What are the costs of adopting socialism? It’s a good question, and one not asked frequently enough. But a new report by the Council of Economic Advisors at the White House does ask the question. The answer? Socialism destroys lives and societies.”

If the 2022 midterm is stolen, we must stand up and speak up because a socialist system is around the corner. Moreover, we must work towards bigger and better election integrity and reform for the 2024 presidential election. And pray that God will bless America – again. Citizens, unite.

“In practice, socialism didn’t work. But socialism could never have worked because it is based on false premises about human psychology and society, and gross ignorance of human economy.” –David Horowitz