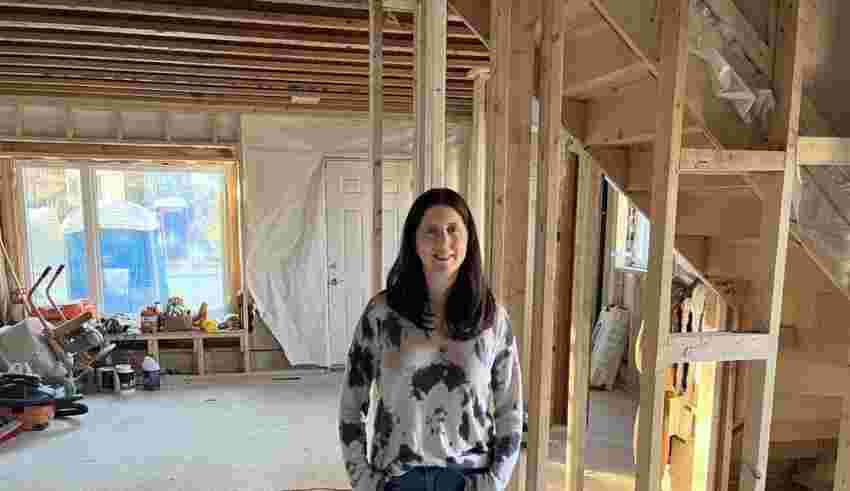 Susan Lambert is in the process of having her entire home renovated and is hopeful it will be completed by early next year.

After going through plans with an architect last year, getting the necessary approvals and some pandemic-related delays, the project officially started this past spring.

Lambert said her and her husband were motivated to upgrade their house after realizing a lot of smaller fixes were needed.

“We needed new windows, we needed a new roof. Our kitchen was falling apart — the cabinets were all broken, our fridge was broken, our stove. So we were kind of needing to do a bunch of things,” she said.

The renovation industry saw quite the boom in the first two years of the pandemic as people spent more timein their homes, and that momentum has continued despite heftier costs and rising interest rates.

Dave Kenney, who runs BroLaws Construction with his brother-in-law, said a kitchen renovation might cost between $15,000 and $20,000 more than it did just a couple of years ago.

“A job two years ago and a job now aren’t comparable, which is a little hard as a business owner when you get callbacks for other jobs that people have used you for before,” he said.

Jordy Fagan, co-founder of Toronto-based interior design firm Collective Studio, said projects are more expensive overall right now, which she attributes largely to labour costs. She said prices for materials, such as lumber, have somewhat stabilized in comparison to big fluctuations over the last two years, but still remain higher than pre-pandemic levels.

“It’s easier to give a quote now, and not be like, ‘OK, this quote is only valid for five days, because anything can happen in five days.’ At least now it’s a bit more stable, and it feels a bit more comfortable to dive into a renovation,” she said.

Coming out of the first lockdown, Collective Studio saw demand skyrocket in the summer of 2020.

“That summer felt a little bit more normal even though we were pre-vaccine. I feel like that ignited interest in getting ready for that next fall wave in terms of setting up work-from-home situations and understanding that kids weren’t necessarily going back to school come September,” Fagan said.

“The volume started to get insanely large, which was amazing.”

Fast forward to 2022 and declining consumer confidence has impacted some of that volume, but the demand is still very much there, said Fagan.

“I think people have some money saved away now,” she said.

Meanwhile, BroLaws’ Kenney said one of the challenges over the past couple of years has been around quality labour, especially as demand remains hot and workers are stretched.

He said his company is working to foster interest in the trades and give young people the proper training and experience.

“I think we need more advocates or people who can showcase that the trades can be a good place to work, and that you can be just as successful as any other job,” he said.

Kenney added that he has raised his employees’ wages as the cost of living goes up, and has consequently increased prices in order to maintain that.

In September, average hourly wages for construction workers were up 7.5 per cent year-over-year, a $2.36 increase to $33.79, accordingto Statistics Canada.

While Kenneyhas been able to keep up with the demand, he said getting projects to 100 per cent is still an issue sometimes due to ongoing delays.

“So we’ve finished a kitchen, for instance, but they didn’t have their stove for another two months, because the stove was backordered and delayed getting shipped over to them,” he said.”Or we’ve finished other projects and we’ve been waiting on a countertop that’s now been backordered just because of the demand getting it in from overseas.”

Homeowners spent on average about $13,000 between March 2021 and February 2022 renovating the inside of their home, while an average of $6,600 was spent on outdoor projects, based on data from home improvement company HomeStars.

HomeStars also found that homeowners expect to spend an average of more than $25,000 for home renovations from March 2022 to February 2023.

So what have people been asking for this year? Dedicated spaces for kids to do work, home offices and spaces to entertain, Fagan said.

Kenney said there are also a lot of requests for kitchen overhauls, outdoor projects and improvements to indoor air quality.

Looking ahead to 2023, some industry experts say there could be a bit of a cooldown on the way.

Kevin Lee, CEO of the Canadian Home Builders’ Association, has already noticed a slight slowingin demand in the second half of 2022.

“A lot of people when they’re doing especially major renovations are financing it through things like their lines of credit. So as the cost of borrowing money goes up as quickly as it has, a lot of people are now putting off some of their renovations,” he said.

However, RenoAssistance, a general contractor business that is part of Desjardins, sees the renovation market remaining strong next year.

That is because more homeowners are choosing to stay in their current property and improving it rather than trying to find a new property in a cooling housing market, it said.

Lambert said the renovation process has been a stressful one, as she and her husband balance mortgage payments, rent and financing the renovation itself, but noted that having a good contractor and architect has made a big difference.

“I went in expecting this, of course, is going to be the most stressful thing we’ve done. That’s what everyone says. I feel like we’ve been managing it pretty well.”

This report by The Canadian Press was first published Nov.13, 2022.