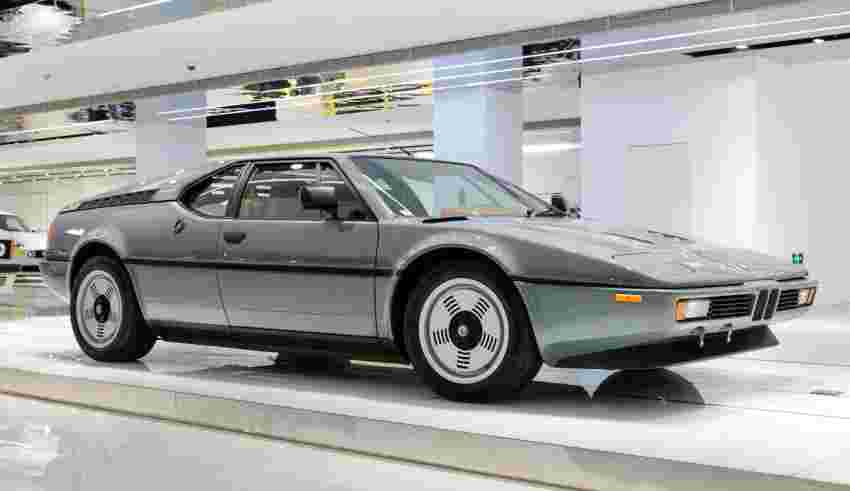 The M1 holds a special significance for BMW, being not only the firm’s first bona fide supercar, but also the first model to be solely developed by the M Division. The driving force behind the project was Jochen Neerpasch, then head of BMW Motorsport, who wanted to create a track-focussed machine that could fly the flag for the company in top-flight competition.

In order to challenge the all-conquering Porsche 911, Neerpasch called for the new car to be mid-engined. Lacking the capacity to produce the 400 examples required to meet homologation rules, BMW approached arguably the experts in mid-engine design—Lamborghini. A tubular steel space-frame chassis was duly created by mastermind of the Miura, Gian Paolo Dallara, but with economic headwinds proving a challenge for the ailing firm, the M1 project was taken in-house in April 1978.

Despite parting company with Lamborghini, the M1 remained an international affair, with the sleek, wedge-shaped glass fiber body being designed by Giorgetto Giugiaro and built by Trasformazioni Italiana Resine, and the chassis assembled by another Modena firm, Marchesi. Both were made whole at Ital Engineering, a company founded by former Sant’Agata engineers and based just 10 miles from the Lamborghini factory. The partially finished cars were then sent to Germany, where Baur installed the engine—a hand-built 3,453 cc double overhead cam, fuel-injected straight-six designed by Paul Rosche.

Some 56 BMW M1s built between 1978 and 1981 would go on to fulfill Munich’s motorsport ambitions, among them a one-model race series dubbed the BMW M1 Procar Championship. The remaining 399 examples were in road-going trim, built to homologate the model for competition.

Chassis 4301218 is one of the most significant road-going BMW M1s. It was first owned by none other than Jochen Neerpasch, the head of BMW Motorsport and the M1 project’s greatest exponent. Bought by the motorsport chief as a parting gift to himself after leaving BMW in 1980, the car is uniquely specified in Grey over a Brown leather and cloth interior and was one of just four examples to leave the factory wearing Grey paintwork. The car was signed off in Italy on 21 February 1980, and by 31 March it had been completed by Baur. It was first registered in Neerpasch’s name on 27 July 1980. He would use the machine as his private car until taking a position at International Management Group, after which the BMW was sold. ‘And this was one of my mistakes in life,’ he told RM Sotheby’s in October 2022.

The car is believed to have next been owned by marque specialist and co-founder of the BMW M1-Club, Reinhard Kleißler, from 1990. Said by Mr Kleißler to have had around 24,000 kilometres on the odometer at time of purchase, he reportedly had the car repainted in the Dachau workshops of BMW master painter Walter Maurer. The car was eventually sold to a collector in 2013. Its new owner exhibited the car at that year’s Concorso d’Eleganza Villa d’Este, where it was awarded the coveted Trofeo ASI for the best-preserved post-war car. Following its concours success, the car was sold back to Mr Kleißler, prior to joining the consigning owner’s private collection, where it formed part of an automotive museum exhibition. As a result of its time spent on static display, this car will require mechanical inspection prior to returning to road use.

First owned by the father of the BMW M1 project and finished in a unique in-vogue colour combination, this beautifully preserved supercar is surely one of the most desirable examples in existence.