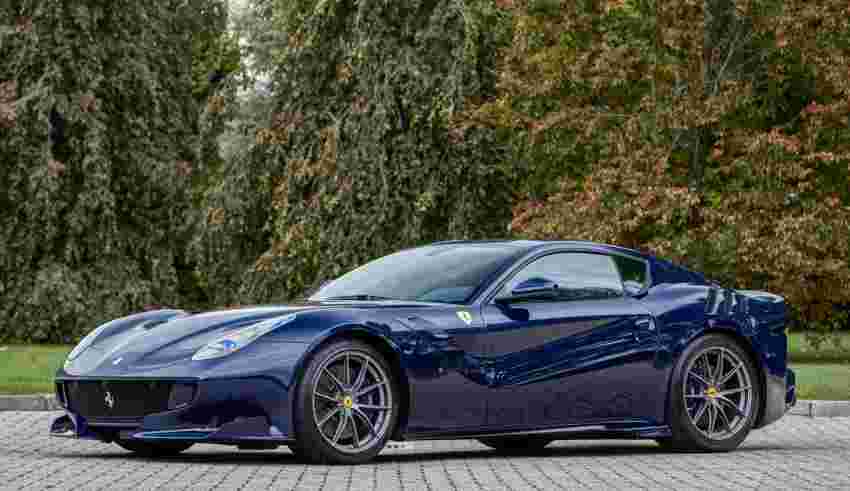 Launched in 2015, the F12tdf was the most extreme version of the F12berlinetta, which had arrived three years earlier as a replacement for the outgoing 599 GTB. The F12 carried the flame for the muscular, front-engined, V-12 powered gran turismos that had built the Ferrari legend since the 1960s, and the Tour de France was its most powerful expression.

Designed as a track-focussed variant, the F12tdf featured many improvements over the already technologically advanced F12berlinetta. The 6.3-liter V-12 was retuned to produce 780 PS, making it more powerful than any Ferrari that had come before—with the exception of the LaFerrari. To rein in that power, carbon ceramic discs and one-piece callipers were borrowed from the firm’s mid-engined flagship. Extensive use of carbon fibre reduced the kerb weight by 110 kilograms, while the gearbox featured shorter gear ratios and quicker changes. The F12tdf was also the first ever Ferrari to feature four-wheel steering.

The result of these modifications is a machine that is visually more aggressive than the standard F12berlinetta, with wider side sills and an “Aerobridge” that directs airflow along the sides of the car. Thanks largely to the longer, taller rear wing and active rear diffuser, the Tour de France boasts an 87 percent increase in downforce compared with the standard F12. It’s also one of the most ballistically quick cars Maranello has ever produced, with 0-100 km/h achieved in just 2.9 seconds and an eye-opening top speed of 340 km/h.

With just 799 examples built between 2015 and 2017, any F12tdf is a rare machine. Chassis 226351 is more special still, having been ordered in the Extra Campionario color of exposed carbon Blu Scozia over a Grigio Alcantara interior; it is also one of only five examples of the F12tdf made in Blu Scozia. This striking and deeply appealing combination was further augmented by body-colored door mirrors, blue brake callipers, and liberal application of exposed carbon fibre. The interior was specified with “Daytona” racing seats—sized large—with matching grey carpets, seatbelts, and Alcantara steering wheel; even the boot is trimmed in luxurious Alcantara.

Furthermore, the Ferrari was ordered with adaptive headlamps, Bluetooth-enabled infotainment system, insulated windscreen, and parking cameras. Owned by the consignor since taking delivery from the Milanese dealer Rossocorsa on 11 May 2017, this F12tdf has been serviced every year since 2018. The most recent service was carried out on 9 June 2022 at 2,867 kilometers, and at time of cataloging the odometer reads just 2,945 kilometers.

The Ferrari F12tdf is one of the greatest gran turismos of the modern era, and a worthy successor to the game-changing Prancing Horse-badged V-12s that came before. The example offered is one of the best, with low-mileage, single ownership, and a dream specification in one of Maranello’s rarest finishes of exposed carbon Blu Scozia, a request reserved for Ferrari’s most cherished customers.