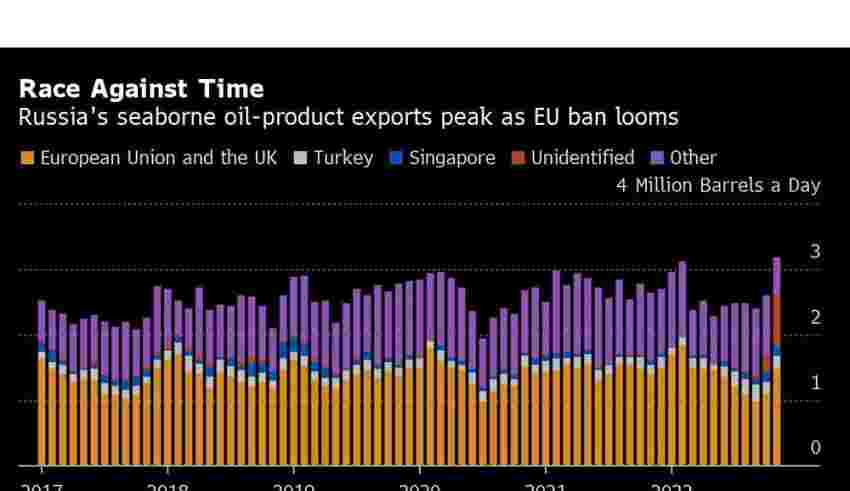 (Bloomberg) — Russia’s seaborne fuel exports have risen to the highest since at least 2017 this month as the nation’s refiners rush to do deals before European Union restrictions on imports and shipping come into force.

The nation’s average daily exports of oil products from Nov. 1 to 10 jumped 22% from the prior month to around 3.17 million barrels, according to estimates from data and analytics firm Kpler.

EU restrictions on importing most Russian crude oil and refined products come in force on Dec. 5 and Feb, 5, respectively. The alliance will also prohibit EU-flagged tankers from shipping the cargoes and ban the provision of maritime service, including insurance, to third-party vessels involved in the trade.

The restrictions, imposed in condemnation of the invasion in Ukraine, will force Russian producers to find new markets for at least 1.6 million barrels a day of crude and 1 million barrel a day of oil products, according to October estimates from the International Energy Agency. The restrictions will create supply risks for the continent because alternative fuel sources may not be enough to fill the gap.

“Shipping and insurance is still in limbo, so for many it’s best to stock up now before all of it comes into effect,” said Kpler analyst Viktor Katona.

As Russia’s fuel exports grow, processing by the nation’s oil refineries in the first nine days of November was roughly flat compared to the October average at around 5.46 million barrels a day, data from the CDU-TEK unit of the Energy Ministry show.

Seaborne flows of key clean oil products from Russia, mainly diesel and naphtha, averaged around 1.73 million barrels a day from Nov. 1-10, the highest level since the start of Russia’s invasion in Ukraine and an increase of more than 20% from October, the data show.