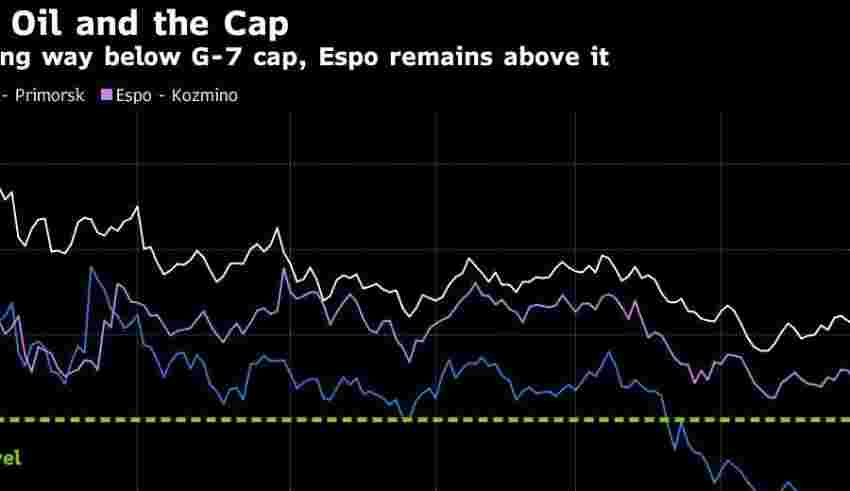 (Bloomberg) — Russia’s flagship oil is selling at less than half international prices — and way below a Group of Seven imposed cap — following sanctions targeting the Kremlin’s revenue from petroleum sales.

The nation’s Urals grade, a far bigger export stream than any other crude that Russia sells, was $37.80 a barrel at the Baltic Sea port of Primorsk on Friday, according to data provided by Argus Media. Global benchmark Brent settled at $78.57 on the same day.

It’s hard to know how Russia might respond to such low levels. On the one hand, it needs all the revenue it can get to fund the war in Ukraine. But dropping too far could prompt Moscow to respond with production cuts, something it hasn’t ruled out in the past.

On Dec. 5, the European Union all but halted seaborne crude imports from the country, killing what was historically Russia’s top export market. Simultaneously, the bloc joined with the G-7 industrialized nations in imposing a cap on the price of Russian supply. Anyone wishing access to Western services — in particular industry standard insurance, but also an array of other things — could only do so if they paid $60 of less.

A key driver of prices has probably been the lost European market, because it put Russia at the mercy of a tiny pool of large buyers, most notably China and India. And with tankers having to sail thousands of miles further to get cargoes from western Russian ports to those buyers, freight costs soared. That forced barrels to be discounted to compete with shipments from the Middle East.

Argus provides data to the International Energy Agency, an adviser to developed countries that is monitoring Russian prices for the G-7. The group is reviewing its cap and will also impose one for refined fuels from Feb. 5. Argus’s figures have also been used in the past to help Moscow calculate duties for oil exports.

Russia’s ESPO crude, named after a pipeline from eastern Siberia, continues to trade slightly above the cap, the Argus figures show. The distances involved in delivering it to buyers is far shorter, likely making it easier to find tankers willing to send it to nearby purchasers outside of the G-7 imposed cap.