Home Entertainment Salman Rushdie Stabbed in N.Y. Ahead of Lecture, Governor Confirms He Is Alive

Acclaimed Indian-born author Salman Rushdie, who has lived under a death threat issued by Iran’s supreme leader over 30 years ago, was attacked onstage Friday in Chautauqua, New York, just as he was about to give a lecture.

The New York State Police told Variety in a statement, “On August 12 2022, at about 11am, a male suspect ran up on to the stage and attacked Rushdie and an interviewer. Rushdie suffered an apparent stab wound to the neck, and was transported by helicopter to an area hospital. His condition is not yet known.” 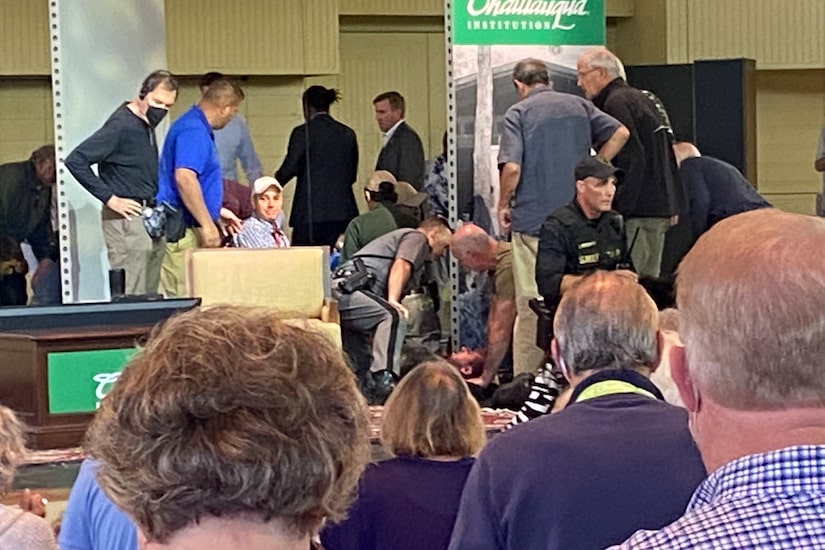 The statement continued, “The interviewer suffered a minor head injury. A State Trooper assigned to the event immediately took the suspect into custody. The Chautauqua County Sheriff’s Office assisted at the scene. More information will be released when it is available.”

Rushdie was scheduled to give a lecture at the Chautauqua Institution. The audience was evacuated after the attack.

New York Gov. Kathy Hochul said, within an hour of the attack, “He is alive. He has been transported to safety.” Praising the controversial author for “speaking truth to power” even under the threat of violence, she went on to commend a state police officer who “stood up and saved his life, protected him.” She said Rushdie is “getting the care he needs at a local hospital” and promised to identify the perpetrator soon.

After Rushdie published his novel “The Satanic Verses” in 1988, which offended fundamentalist Muslims, Iran’s Ayatollah Khomeini issued a fatwa calling for his assassination and offering a seven-figure reward.

In 2012, it was reported that the 15 Khordad Foundation of Iran had raised the amount of the reward to $3.3 million from $2.8 million.

Three years ago, Ayatollah Khamenei, the current supreme leader of Iran, tweeted that the fatwa was still valid. Twitter locked the account and forced the tweet to be deleted.

Rushdie has written a dozen novels, the most celebrated of which is 1981’s “Midnight’s Children.” He published the memoir “Joseph Anton” in 2012 about living underground with a price on his head, titling it with the false name he used to conceal his identity.

After the attack, Suzanne Nossel, CEO of PEN America — Rushdie is a former president of the nonprofit devoted to free expression — said in a statement to Variety, “Salman Rushdie has been targeted for his words for decades but has never flinched nor faltered. He has devoted tireless energy to assisting others who are vulnerable and menaced. While we do not know the origins or motives of this attack, all those around the world who have met words with violence or called for the same are culpable for legitimizing this assault on a writer while he was engaged in his essential work of connecting to readers. Our thoughts and passions now lie with our dauntless Salman, wishing him a full and speedy recovery. We hope and believe fervently that his essential voice cannot and will not be silenced.”