Home Business ‘Scared the Hell Out of Me’: NYSE’s Wild Start Rattles Traders 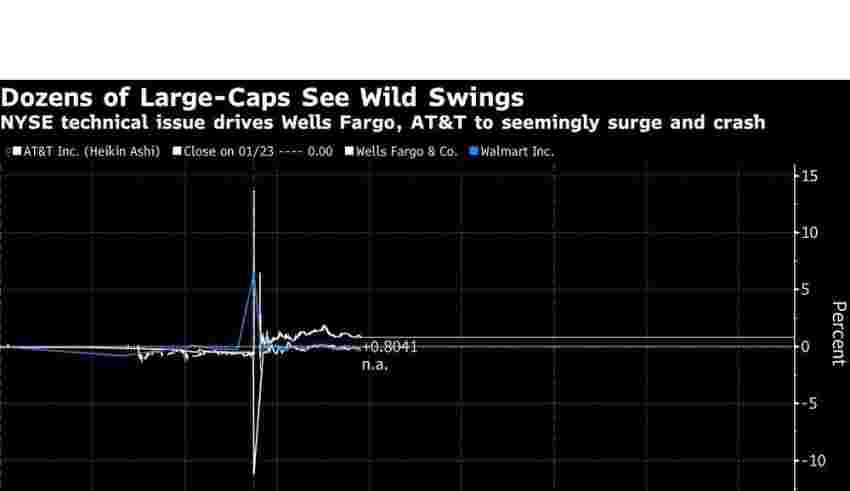 (Bloomberg) — A chaotic open for some stocks listed on the New York Stock Exchange sent chills across Wall Street as dozens of the largest companies in the US seemed to erase billions of dollars in market value for no apparent reason, leaving some investors frustrated and others clamoring for an explanation.

Trading was halted for dozens of big-cap stocks within the first 30 seconds of Tuesday’s session after they appeared to post wild swings that puzzled investors. The NYSE’s operations were back to normal less than 20 minutes later.

Still, traders and portfolio managers were shocked by the magnitude of the apparent moves. Wells Fargo & Co. appeared to have crashed 15%, Walmart Inc. looked like it wiped out $46 billion, and AT&T Inc. seemingly swung between a 20% gain and a 21% tumble in a matter of seconds.

“It scared the hell out of me when I first saw it, one of my biggest holdings was down 12.5%,” said Matt Tuttle, CEO of Tuttle Capital Management. “I would be surprised if some people didn’t end up getting hurt in this. Yes they halted the stocks, but there were trades before the halt and I don’t know what you end up doing about that.”

Ken Mahoney, CEO of Mahoney Asset Management, said he was trying to sell stocks like AT&T Inc. and Exxon Mobil Corp. on the initial pops. “We also thought maybe there were some arbitrage opportunities within the ETFs that hold the affected stocks,” he said in a message to Bloomberg News.

Meanwhile, Jonathan Corpina, senior managing partner at Meridian Equity Partners who is usually on the exchange trading floor but was working remotely on Tuesday morning, frantically relayed information to customers and traders.

“My traders on the floor are getting pummeled,” he said. “All of our phones are lighting up. All of our customers are calling asking what happened.”

The NYSE is investigating the opening auction and why it did not occur for some stocks, the exchange said in a statement. Investment and trading firms can consider filing claims on trades that were affected by the glitch, according to the statement. The US Securities and Exchange Commission said it also is reviewing the trading activity.

“It was a bit of a scramble,” said Justin Wiggs, managing director in equity trading at Stifel Nicolaus. “We had quite a few names affected. But once it got to critical mass where more tickers were impacted, investors got less frantic since they realized it was a bigger problem than just the one ticket they had an issue with.”

Details remain scarce. But if there’s a lesson, it’s avoid market-on-open orders, according to Tuttle. “Theoretically if they don’t reverse these trades, those are the guys who lose the most,” he said by phone. “It’s making it hard for me right now looking at some of these stocks because there are some highs and lows that just aren’t a part of reality.”

Computer glitches that lead to erratic pricing and impact trading for a few minutes aren’t unheard of on American exchanges. Perhaps the most famous was in August 2012, when faulty software employed by one of the biggest market makers, Knight Trading, riddled exchanges with erroneous orders and drove swings across the market. Last year, Citigroup Inc.’s London trading desk was behind a flash crash that sent shares across Europe tumbling, while in Canada a software-issue caused a 40-minute outage at three stock exchanges.

“I can count on one hand ever since the advance of technology since the early 2000s that something like that has happened at NYSE,” said Kenny Polcari, senior market strategist at Slatestone Wealth who spent four decades at the NYSE. The issue likely affected day traders and those who use algorithmic trading, but not long-term investors, he added.

“If I happened to be in the middle of a trade with NYSE, it would have been rejected, so I would have sent it to a different venue,” he said. “If it had lasted for hours and affected other exchanges, that would be a different issue. But that didn’t happen.”

—With assistance from Matt Turner.