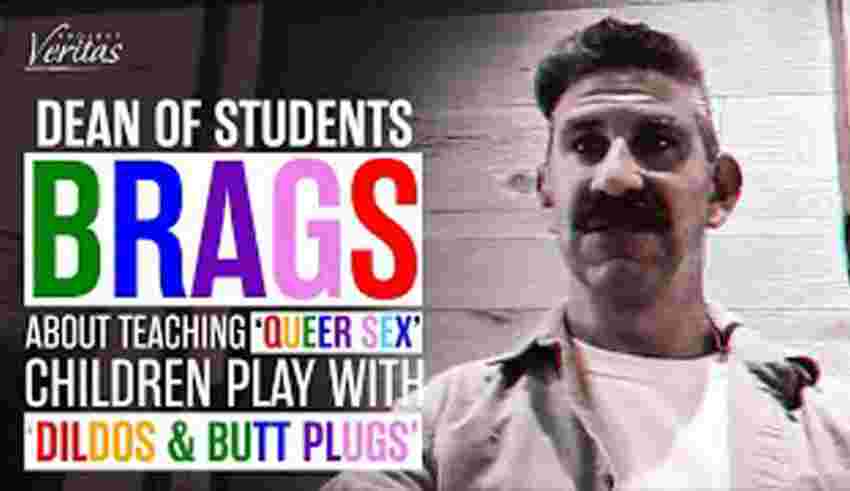 In the video, Joseph Bruno, 41, told an undercover reporter from the conservative news website Project Veritas that the school aims to teach students at the Francis W. Parker School in Chicago about “queer sexual intercourse.”

And of course, a drag queen was invited. What would a LGBTQ discussion about queer sex be without a drag queen (aka heterosexual, homosexual, bisexual, transsexual male dressed up like a female)? GROOMERS R US.

“The kids are just playing with ’em, looking at ’em…They’re like, ‘How does this butt-plug work? How do we do – like, how does this work?’ That’s a really cool part of my job,” Bruno told the undercover reporter.

I had no idea what a butt plug was, so I googled.

Excuse me while I vomit! Bruno is a depraved reprobate who has access to minors.

Folks, prior parental consent was not obtained. The radical Lefty LGBT militia operates in secret as the bypass parents and guardians. Pitting kids against parents is on their agenda of atrocity. Sickening immorality.

The video, shared to Project Veritas’ Twitter account, which has one million followers, has been viewed more than 3.5 million times.

Folks, here’s the disgusting kicker that made my head explode a second time:

The article continues, “Parker leaders sent a letter to the school community late Wednesday saying “we are heartbroken that one of our colleague’s words have been severely misrepresented for a malicious purpose.” The letter offered strong support for their faculty and staff and for the school’s “inclusive, LGBTQ+ affirming, and comprehensive approach to sex education.”

The letter tells the parents about the sex toys:

“In the video, Bruno described an event during the school’s annual Pride Week last May. During an optional lunchtime session for high schoolers, educators from Howard Brown Health presented a lesson on queer sexual health that included showing sex toys to students. Bruno also mentioned a storytime and photo-op with a drag queen.”

My question: What else has Bruno done that wasn’t caught on camera?

Sane and sensible parents should be outraged and picketing the school’s administrators and board members.