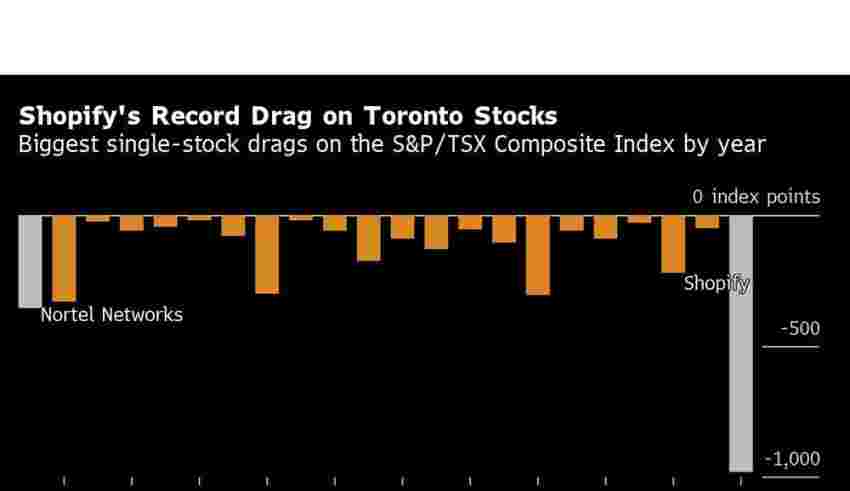 (Bloomberg) — Shopify Inc.’s 70% plunge has almost single-handedly dragged the Canadian stock market into the red this year, taking the shine off what would otherwise be one of the world’s top-performing major equity benchmarks.

The e-commerce software provider has lost C$161 billion ($118 billion) in market value in 2022, causing a 978-point drag on the S&P/TSX Composite Index. Without it, the index would be down less than 2% in Canadian dollars this year, rather than 6%.

It’s not the first time a single tech stock has been a huge anchor on the key Canadian index. Nortel Networks Corp.’s collapse was a 353-point drag in 2001, the index’s inaugural year. BlackBerry Ltd., then called Research In Motion, was the TSX’s biggest negative contributor in 2008, pulling the index down more than 300 points.

Despite Shopify, Canadian stocks have outperformed the S&P 500 Index by more than 11 percentage points this year. Unlike some European and US equity gauges, the S&P/TSX Composite did not enter an official bear market this year: its peak-to-trough decline was 17.6%.

Soaring oil and metals prices have lifted energy and mining stocks, which make up about a 30% weighting. At the same time, US megacap tech stocks have been pummeled by the relentless rise in interest rates: seven FANG+ stocks are responsible for about half of the S&P 500’s 17.5% decline in 2022.

“Concentration risk matters in an index,” said Craig Basinger, Purpose Investments Inc.’s chief market strategist. Shopify’s problems “sucked for Canada” but the tech sector makes up a smaller proportion of the index here, he noted. There’s only one other tech company on the TSX with a market capitalization of more than C$40 billion.

For longer-term holders of index funds, Shopify has had a less meaningful impact. In fact, the stock has had almost no influence on the benchmark over a three-year period, as this year’s losses have essentially given back two years of big gains. The TSX Composite is up 17.7% over three years, with banks, commodities and railways having the biggest upside impact.

“With Shopify being a smaller component, there’ll be more room to continue to outperform as long as we’re in a tightening cycle with rising interest rates,” said Martin Pelletier, senior portfolio manager at TriVest Wealth Counsel.