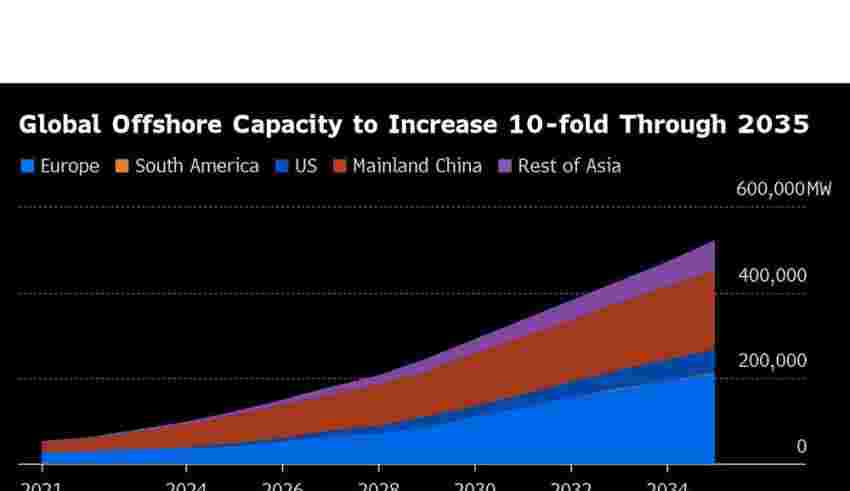 After counting shareholder votes, the German company controls 93% of the wind turbine maker with a plan to move to full ownership and a de-listing of the manufacturer, Siemens Energy said Monday.

Moving ahead with the €4 billion ($4.2 billion) offer for the 33% of outstanding shares caps a tumultuous period for the Spanish wind turbine maker. Repeated profit warnings have for years undermined its parent, instead of bolstering a soon-to-be—waning oil and gas-heavy business with a new profit center. By 2025, Gamesa is targeting a return to profitability.

“The new management put its focus on increasing gains rather than volumes, and that has made fixed manufacturing costs more difficult to cover,” said Angel Perez, a Madrid-based analyst at Renta 4 Banco SA. “Such focus on profitability should now pay off, with volumes expected to increase through 2030.”

Getting here has been a long slog and returning Gamesa to profitability will be challenging. The business, racking up €2.5 billion in losses during the past three years, is facing daunting hurdles from homegrown problems and an onshore wind industry in crisis due to crippling supply-chain issues, raw material cost increases as well as regulatory pressures in setting up new onshore wind parks.

European peers, like Vestas Wind Systems A/S and Nordex SE, are also loss-making due to intractably high costs for onshore turbines as no terrain is like another, erasing economies of scale, even as demand for wind power is rising rapidly. With Siemens Gamesa’s business concentrated in onshore solutions, the broader industry issues come on top of problems with one of its 5.X wind turbine.

After supply chain bottlenecks and commodity inflation heaped pressure on European manufacturers, a drop in the price of steel — one of the main raw materials for turbines — and policies in the US and European Union supporting renewable energy are now likely to boost profitability. Global wind capacity is expected to soar to about 190 gigawatts by 2027 from about 100 gigawatts this year, according to Bloomberg Intelligence.

“Key goals for the combined Siemens company will be the ability to fill out their order book and how are they are positioned to capture this upcoming demand,” said BI senior analyst Rob Barnett.

The onshore division, churning through three CEOs in the last five years, is still dealing with component failures and repairs that keep pushing up costs. The problems stem from rushing out the new turbine too early in 2019 to counter fierce competition, according to people with knowledge of the matter.

A spokesmen for Siemens Gamesa and Siemens Energy declined to comment.

Despite the troubles, the onshore pillar remains dominant. As of the end of fiscal 2022, Siemens Gamesa had an installed onshore and offshore wind generation fleet of almost 127,500 megawatts with the onshore business bringing in €4.8 billion in revenue — or 64% of the wind turbine generator segment.

Siemens Energy listed in 2020 with its controlling stake in Gamesa after being spun out of Siemens AG that sought to streamline its business and giving divisions more freedom to address issues such as the energy company’s underperforming gas turbine business. Siemens had aimed to substantially reduce its 35% stake within 18 months of listing but issues including Gamesa’s troubles have weighed on Siemens Energy’s stock, which is trading 23% below its initial public offering price.

Gamesa is Siemens Energy’s largest unit by revenue and the losses have raised questions about the company hitting medium-term profitability goals, even as efforts to improve the performance of its gas turbine business are increasingly show results.

“The current structure with our 67% share makes decisions extraordinarily complicated and slow in a market where you need to react quickly,” Chief Executive Officer Christian Bruch said last month during the company’s earnings call.

As turbine manufacturers grapple with protracted issues, demand is set to grow fast. Global offshore installations are expected to reach 521 gigawatt hours by 2035, a ten-fold jump from a current 53 gigawatt, according to renewable energy research group BloombergNEF. Getting on top of industry challenges is pivotal to outflanking new competitors from China.

Manufacturers based in the Asian country, where price dropped to a record low in the first half of this year are focusing on overseas markets. Export of Chinese wind turbines jumped 60% last year, reaching 1.6 gigawatts, according to BloombergNEF.

—With assistance from William Wilkes and Eyk Henning.