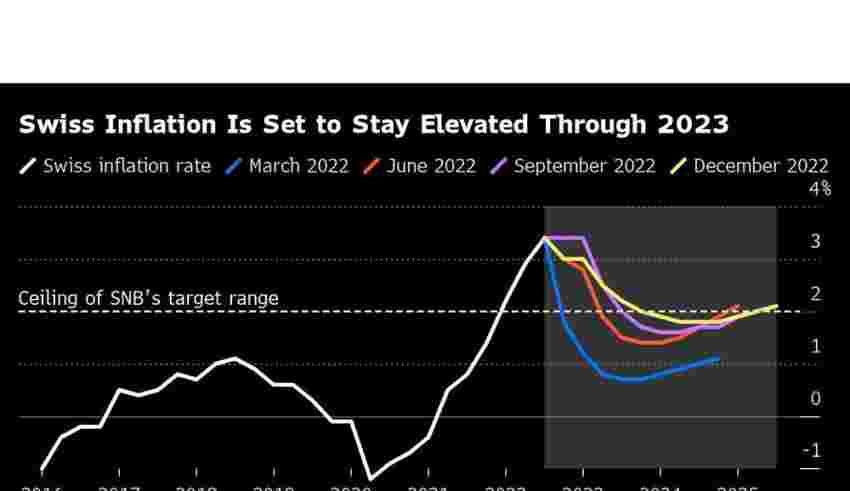 (Bloomberg) — The Swiss National Bank raised its interest rate by 50 basis points, a third salvo against inflation that narrows the gap with the borrowing costs of global peers.

Officials raised the benchmark to 1%, as predicted by a majority of economists surveyed by Bloomberg. Further increases can’t be ruled out, the central bank said.

“There is a danger that inflation could remain elevated in Switzerland in the medium term owing to second-round effects,” President Thomas Jordan told journalists in Bern. “The renewed tightening of our monetary policy is therefore necessary.”

The move on Thursday dials down Switzerland’s aggression while realigning benchmark borrowing costs toward higher levels in the surrounding euro zone and in the US, helping shore up the franc to contain imported price pressures. The country’s outlook remains more benign than elsewhere, with inflation at the lowest in the OECD and no imminent threat of a recession.

A lack of specific communication by SNB officials on the likely size of the hike left economists split on the outcome. While most predicted a half-point move, two anticipated a quarter point and five reckoned on 75 basis points transpiring.

The SNB’s increase follows the Federal Reserve’s hike on Wednesday, accompanied by Chair Jerome Powell’s comment that officials have more work to do to vanquish inflation. It precedes a likely half-point hike by the European Central Bank later on Thursday.

While those counterparts take decisions twice as often, Swiss officials with their quarterly meetings could still claim more progress in tightening monetary policy than in the euro zone.

That’s because rates in Switzerland are higher in real terms than in the surrounding region. Inflation is less than a third of the pace in the 19-nation currency area. Price growth — which reached 3.5% in August on a national measure — has already slowed from that peak and may keep weakening.

Officials warned that inflation is “still clearly above the range the SNB equates with price stability” and will stay “elevated.”

The strength of the franc has helped keep such pressures in check however, according to Jordan.

“This appreciation has helped ensure that less inflation has been imported from abroad, thus curbing the rise in inflation,” he said. The president added that officials will buy or sell foreign currency to support monetary policy as necessary.

Switzerland may escape a recession currently seen to be gripping the euro region. The central bank sees growth of around 0.5% next year, down from about 2% in 2022. Such forecasts are subject to “high uncertainty,” the SNB said.

“A stronger economic downturn abroad or a pronounced energy shortage in Switzerland would, in particular, have a negative effect,” Jordan warned.

(Updates with Jordan in third paragraph)