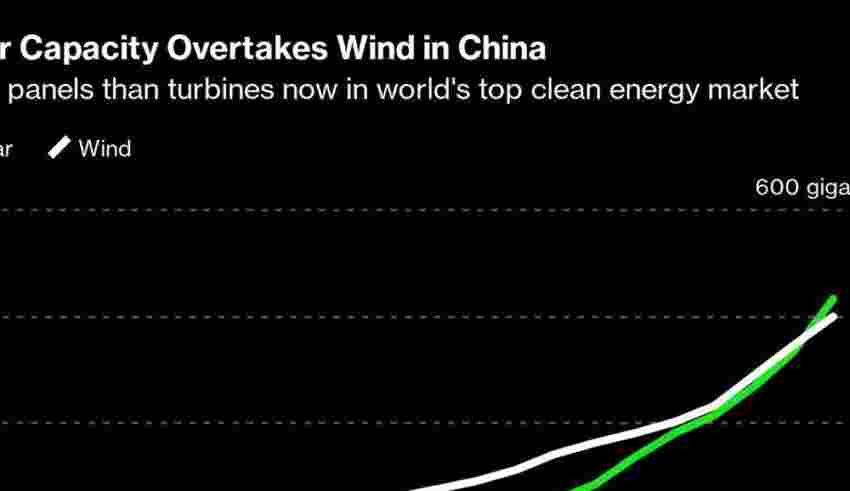 In some ways solar is having too much success in China.

Installing panels has become so popular that Chinese officials drafted regulations to make sure developers don’t put them on land needed for other uses. And new data suggests the solar frenzy has only just begun.

Solar panels have overtaken wind turbines in the world’s biggest renewables market as photovoltaic manufacturers ramp up output to lead the energy transition.

China’s solar capacity rose 1.9% to 349.9 gigawatts in August, surpassing wind, which grew by just 0.2% to 344.5 gigawatts, according to National Energy Administration data released last week. The country will have more capacity from panels than turbines on an annual basis for the first time by the end of this year, according to BloombergNEF forecasts.

It’s unlikely solar will relinquish that lead. Driven by a supply chain that has slashed costs and boosted efficiency while massively increasing the amount of panels it can produce, the technology is now the cheapest energy option in many places. In terms of capacity, solar overtook wind globally in 2019 and is expected to be twice as large by 2030, according to BNEF.

“Wind used to be much cheaper than solar, but solar caught up and in fact is even cheaper now in most sunny countries,” said Jenny Chase, BNEF’s lead solar analyst. “Plus you can build solar in more places.”

Both solar and onshore wind are cheaper on a new-build basis than gas and coal, according to BNEF. And turbines still generate much more power than panels over the course of a year because they’re in use far more often.

The main driver for solar’s dominance is larger and more sophisticated factories that increase economies of scale. Even with an uptick in the price of modules this year because of a shortage of key material polysilicon, the cost of solar power in China is about $44 per megawatt-hour, down from $183 in early 2014, according to BNEF.

The technology’s versatility is also a plus. While both wind and solar are benefiting from China’s plans to build massive arrays of panels and turbines in the country’s vast deserts, solar is getting an additional boost from a government scheme supporting so-called distributed generation.

More than 600 cities and counties are taking part in the program designed to boost rooftop solar by aggregating small projects into larger batches, luring bigger developers. More than half of all solar installations in China were on roofs last year.

Space for all of these panels is becoming a concern. The Ministry of Water Resources issued a rule in May banning projects on some waterways, lakes and reservoirs to protect ecology and prevent over-development that could disrupt flood control. A separate draft regulation is under consideration that would prohibit new solar projects on cultivated land or forests.

Still, that won’t be too large a speed bump for solar uptake. China could install as much as 100 gigawatts of panels this year, nearly doubling a record set in 2021, according to the country’s leading industry association.

Chelsea Handler ‘Didn’t Know’ She Was on Ozempic