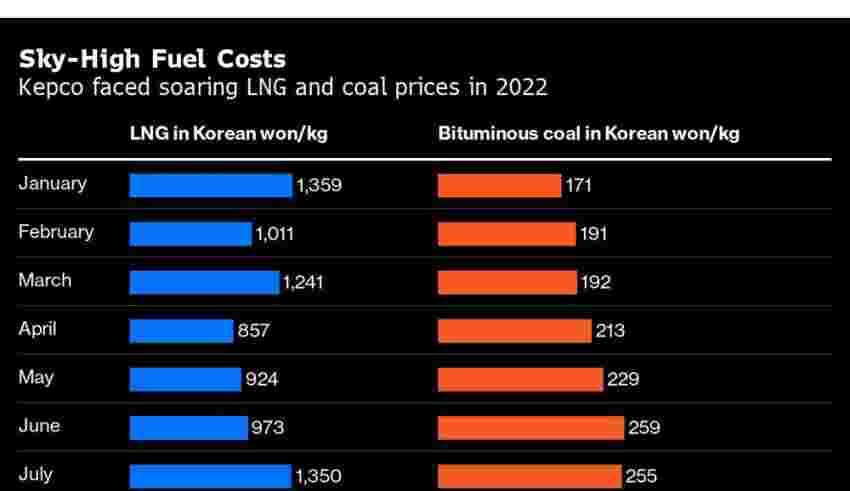 (Bloomberg) — South Korea plans to raise its electricity rates by an unprecedented amount next year as the state-run utility faces a record loss from sky-high fuel costs.

Electricity prices will be increased by 13.1 won per kilowatt-hour (1 US cent) for the first three months of 2023, according to a statement Friday from Korea Electric Power Corp. The rate hike, which reflects soaring gas, oil and coal prices, is the biggest quarterly raise on record, and compares with 19.3 won for all of 2022.

To be sure, while the increase is large for South Korea, it pales in comparison to similar rate hikes in Europe.

Despite surging global energy prices, South Korea’s monopoly power distributor, known as Kepco, refrained from significantly increasing electricity rates in 2022 to help ease the inflation hit to consumers. That has contributed to record losses, which are expected to reach almost 30 trillion won ($24 billion) this year.

Finance Minister Choo Kyung-ho said earlier this week that a “significant” increase in electricity rates is inevitable, while a hike in gas prices will be made after the first quarter. He added that bond issuance by Kepco will be drastically reduced in 2023, after a record amount was sold this year.

Inflation is expected to remain elevated, and then decelerate next year as oil stabilizes and higher interest rates slow economies both at home and abroad, Bank of Korea Governor Rhee Chang-yong said last week.

Kepco shares fell 1.4% in 2022, declining for a seventh consecutive year.