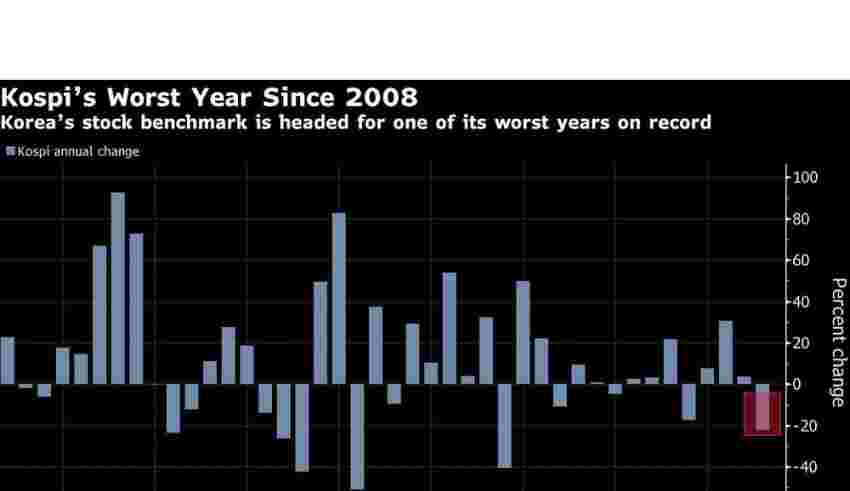 (Bloomberg) — While declines in chip and Internet giants have put South Korean equities on course for their worst year since the global financial crisis, investors found winners in the electric-vehicle supply chain and defense sector.

The benchmark Kospi is down about 22% in 2022, headed for its largest loss since 2008. The biggest drags include a 26% decline in Samsung Electronics Co. and a loss of double that size in Kakao Corp., as growth stocks were pummeled worldwide over recession fears.

Other losers included some of last year’s biggest gainers, such as metaverse, video game and crypto stocks. Shares of firms tied to entertainment hits such as Netflix’s “Squid Game” have endured white-knuckled volatility amid fears they could turn out to be one-hit wonders.

“It was a year of suffering for growth stocks,” said An Hyungjin, chief executive officer at Billionfold Asset Management, also noting the “vicious circle” of big directional changes.

The $10.7 billion share float from electric-vehicle battery maker LG Energy Solution Ltd. meanwhile lured investors as they moved away from chip stocks. The Tesla Inc. supplier split off from LG Chem Ltd. has climbed 53% since its January debut and become the No. 2 weighted stock in the Kospi.

Brokerages including Goldman Sachs, Morgan Stanley and Nomura have raised their views on South Korean equities for next year, citing cheap valuations, a possible rebound in memory chip stocks and potential benefits from China’s reopening.

Here are some other winners and losers in the Korean stock market in 2022.

The biggest gainer in Korea this year was created when the new owners of little-known civil-engineering firm Korea SE Corp. changed its name to Hydro Lithium Inc. and created ambitious plans for new businesses in fields from EV battery materials and lithium mining to recycling and renewable energy.

“It added all the hottest business items including lithium into the company’s articles,” said Ahn Hyunsang, chief executive at Korea Investment Research Institute, which offers stock trading classes to day traders. “It’s like trading crypto coins with no substance. I don’t recommend it but people who love volatility could prefer.”

One of the hottest inflation-era trades in South Korea this year was the country’s largest convenience store operator, BGF Retail Co. With a $2 lunch menu, the CU store-chain operator was a primary beneficiary of consumer belt-tightening amid surging prices. The stock also benefited from increased movement due to South Korea’s lifting of Covid-related restrictions on sports and outdoor activities, and returns to schools and offices.

Clean-energy stocks including Hyundai Energy Solutions Co. (+138%) and Hanwha Solutions Corp. (+28%) emerged as the biggest foreign beneficiaries from President Joe Biden’s landmark US climate law on expectations for a tax-credit bonanza and reduced dependence on equipment from China. Analysts remain bullish on the sector for next year, with the average 12-month price target on Hanwha Solutions implying potential for a further 40% return.

Kakao and three listed affiliates have seen more than $48 billion in combined market value wiped out this year amid a global turn away from pandemic beneficiaries. Their stocks have also been beset by local concerns over online monopolies and a temporary outage of the group’s services, including Korea’s No. 1 messenger app.

Kakaopay Corp. and KakaoBank Corp., which were both listed amid a boom in Korean floats in 2021, have dropped below their initial public offering prices. While analysts are still largely bullish on parent Kakao, any rebound may hinge on an end to the worldwide rate-hike cycle and its ability to regain public trust.

After surging more than 800% in 2021, Wemade Co. is on track for an 81% loss this year amid steep declines in cyptocurrencies and after Korean exchanges decided to delist its token. The game developer’s affiliate Wemade Max Co., which skyrocketed 1,500% last year, lost three quarters of its value this year. Vidente Co., which had discussed a possible sale of its holding in crypto exchange Bithumb to FTX, tanked 87%.

Another group of stocks that saw a reversal of fortunes are those related to hot entertainment properties such as “Squid Game”. Bucket Studio Co. is down about 70% in 2022, while Showbox Corp. is down 40% after both surged last year on excitement over their ties to the dark survival series.